In this paper we present a password authentication protocol over untrusted networks. This password authentication protocol stores user password in a non-plaintext equivalent therefore a breached database would not reveal enough information about the user password. This protocol relies on the strength of discrete logarithms with the Schnorr Signature Scheme and also goes further to satisfy all properties of a zero knowledge proof system.

• What a person is (biometrics)?

• What a person has (tokens, cell phone)?

• Where a person is (location)?

to a combination of these factors which is known as a Multi-factor user authentication scheme. Although all these factors are designed to offer some protection against security attacks, the current trends in computing keeps introducing new threats.

Building authentication schemes with zero-knowledge proofs has been researched and implemented in many flavors along the years. The need to provide such secure authentication schemes for web applications and services has been driven by the influx of mobile devices and internet in our daily lives. Some of the researches in Zero Knowledge Proof Authentication Schemes are as follows: "NARWHALL-An implementation of zero knowledge authentication" [2]. In this paper they discussed several vulnerabilities in existing website authentication systems and NARWHALL as a more secure alternative to such authentication systems. NARWHALL fixes most of the discussed vulnerabilities by building on an original protocol described by Lum Jia Jun [11]. The protocol described by Lum Jia Jun is based on the Zero Knowledge Authentication with Zero Knowledge framework which allows an easy implementation of Zero Knowledge Authentication [11]. In [11] the available values to the prover of the system is his password and a public key, and the available values to the verifier of the system is the same public key as the prover’s and a pseudonym of the user which would will be calculated for during any authentication round. NARWHALL builds on such protocol by adding more components for more secure authentication. During a signup session with NARWHALL, a username, password of the user is entered and also the websites public unique identifier, the password is hashed and a public key is generated from it. The website unique identifier prevents users with the same username and password from two website to have the same public key and also the username prevents users of the same website to have the same public key. During a login session to a random challenge is sent to the users login form and stored in a cookie; on any login attempt the cookie information is updated to prevent brute forcing. Some implementation issues were identified the worse of all being the dependence of Javascript for client side processing. In browsers with disabled Javascript, the whole authentication fails. Another issue could be attributed to salting the user’s password before generating a pseudonym for the user. The user’s password were not salted hence an attacker could pre-compute values of the credentials and submit it for authentication.

and the permutation of

is the private key. During authentication a prover will generate a random permutation and sends a graph

to the verifier (server) and depending on the challenge sent to the prover, the prover responds with either

Thiruvaazhi et al. proposed an elliptic curve discrete logarithm zero knowledge proof protocol for proving a user’s binding to a public key and also his possession of a private key [15]. In their scheme a user’s visited domain is hashed and encoded and sent to the web server and the web server responds with its actual public key and it is hashed and encoded by the user and also verified against the original encoded hash of the domain name during registration to check it validity. In proving the private key, an elliptic curve will be generated over a finite field; a prover will choose a random value and compute the witness and send it to a verifier. A verifier will also randomly choose a challenge as either 0 or 1 and sends it to the prover and the prover will respond based on the challenge and finally the verifier will compute the validity of the response based on the prover’s response. In this implementation there were some performance issues because of the iterations needed for the Zero Knowledge Proof challenge – response authentication round which could be detriment to its implementation on mobile platforms.

This is a three move protocol in which the exchanged messages; the commitment, challenge and response are exchanged between a prover and verifier to be able to prove the knowledge of a secret key. The first step involves the prover sending a commitment to the verifier and the verifier responding with a challenge and finally the prover sending its response for final verification of the knowledge secret key. To describe this scheme we can define the values available to the prover as (g, q, y, and x) and that of the verifier as (g, q, and y) where g, q and y are public keys and x is the secret key only known by the prover

be a generator of G (a finite group of order q). Let

Such proofs of knowledge are useful in the construction of signature schemes.

and satisfying the verification equation

where H is a collision-resistant cryptographic hash function

that maps to a fixed hashed output.

The verification phase shows how a signed message can be verified by the other party.

6. Signatures Based on Proofs of Knowledge – (SPK)

Signature based on proofs of knowledge is used to prove the possession of secret keys [7]. For a pair

, the secret value can be expressed in terms of the public key as

can be expressed as

. The challenge can be expressed as

and the response as

. A general notation of a proof of knowledge of the secret keys

can be expressed as

Our scheme relies on

for website authentication. The strength of our scheme as compared to NARWHAL (a challenge-response model authentication based on zero knowledge proofs) [2] is based on the complexity of how passwords are stored. It doesn’t share weakness with hashed passwords since an attacker with pre-computed values of passwords would not be able to look it up. Our scheme offers a stealth authentication over networks since not much information is leaked on the network during an authentication round. 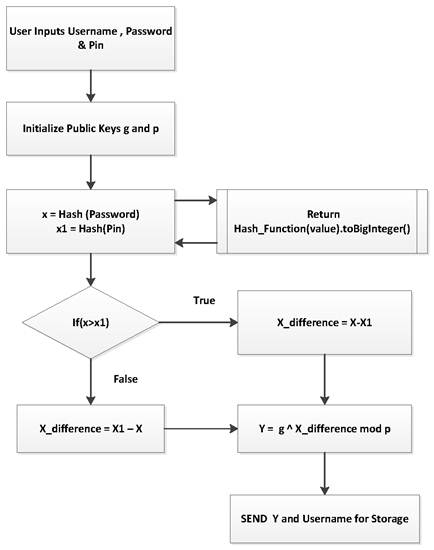 In the user registration process, a user chooses a username, password and pin of their choice and their pin and password are hashed with a collision -resistant hash function and converted to big integers [1]. A difference of the larger value from the smaller value is taken and computed with the cryptographic group element

and stored with the username to the server. The value stored on the server does not reveal enough information about the private key of the client being (

. The value stored on the server

During sign-in the user enters his username, password and pin as they registered with and the password and pin are hashed using the same collision-resistant hash function as at signup and the values converted to big integer values for further computation. From

we can set our message parameter to null (

) [1] and deduce the signing as follows: 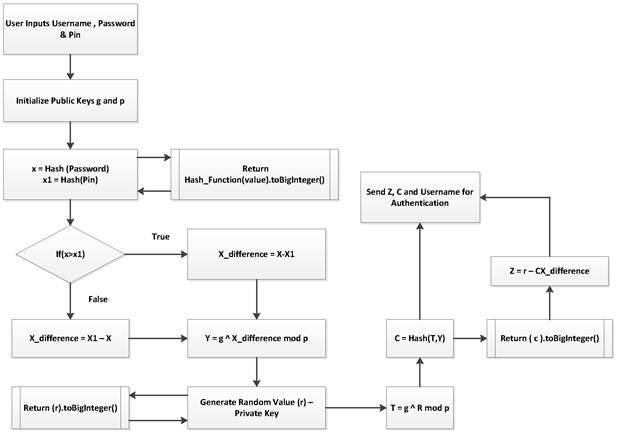 The client sends (C and z) to server for authentication.

At the user authentication at server side, the process has to be proved for correctness.

For any round of authentication valid credentials can be verified. 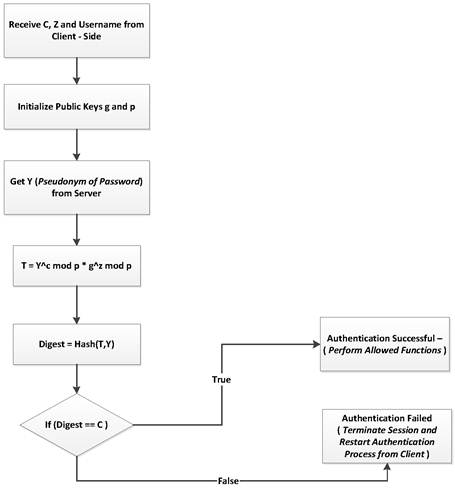 9. Strength of Our Scheme

The strength of our protocol is based on the strength of the discrete logarithm problem. The protocol will be able to solve the problem of user authentication over unsecure networks. During authentication, a user submits his public key and private key for authentication hence no other knowledge of the password is known. On unsecure networks, data sniffed would not reveal anything much about the user’s secret key hence it cannot be replayed for another authentication session. The intractability of discrete logarithms and its easy implementation makes it a better candidate over Visual Cryptography, Pairing based Cryptography and Elliptic Curves for Zero Knowledge Proofs [8] [9].

With the defined problems addressed in this paper, we can implement our zero knowledge proof implementation code-named Stealth Knowledge Authentication for devices with minimal computational resource. With HTTPS providing a secure transmission of authentication details and our Javascript assets files, we implement it to protect user details before and after transmission.

Although our implementation requires JavaScript which is supported by most browsers, some users disable it which would prevent it to run on such systems and also the authentication scheme is not multi – factor, which would make it susceptible to attack when the user’s secret keys are known. Our implementation also doesn’t follow the classical Zero Knowledge Proof Authentication’s Challenge – Response round hence there could be a slight chance of a cheating verifier proving him or herself as an honest verifier hence Ajax and Sockets could be used to implement it hence reducing it iterating challenges.