Vegetation Cover and Medidcinal Use of Chitraokoot Kamadgiri Hill Plants

Chitrakoot is a place of religious, cultural, historical and archaeological importance, situated in the Bundelkhand region. The place is believed to have been the abode of Lord Ram, Sita and Laxman during their exile. Chitrakoot as an eminently holy place inhabited by the great sages, abounding in monkeys, bears and various other kinds of fauna and flora. Totally 159 (Herb 107, tree 25, climber 17 and shrub 10) species were recorded in survey and studies on some medicinal plant of Kamadgiri hill.

Kamadgiri is the main holy place of Chitrakoot. The sanskrit word 'Kamadgiri' means the mountain which fulfills all the desires. Kamadgiri, the original Chitrakoot, is a place of prime religious significance. A forested hill, it is skirted all along its base by a chain of temples and is venerated today as the holy embodiment of Rama. There is a five KM Parikrama Path around the Kamadgiri Mountain. The place is believed to have been the abode of Lord Ram, Sita and Laxman during their exile. Lord Kamtanath, another of his names, is the principal deity not only of Kamadgiri but of the whole of Chitrakoot. Chitrakoot means the 'Hill of many wonders'. Chitrakoot falls in the northern Vindhya range of mountains spread over the states of Uttar Pradesh and Madhya Pradesh. The Chitrakoot region is included in the District Chitrakoot of Uttar Pradesh and the District Satna of Madhya Pradesh (District Unit Chitrakoot, National Informatics Centre).

Tulsidas, the saint-poet of hindi has spoken very reverently of this place in all his major works-Ramcharit Manas, Kavitawali, Dohawali and Vinaya Patrika. In India used approximately about 2500 species of medicinal plants which few more than 100 species serve as regular sources of medicine (Pei. 2001, Jain and Patole. 2001). Shinwaikar et. al (2004) reported that many plants have shown positive activities. A good number of plant species are being used the treatment of diarrhoea and dysentery (Sikarwar et al., 2008).

Totally 84 species of plants belonging to 39 families were known to be effectively used for treating pyretics, skin, ulcer, gastrointestinal, diabetes, diarrhoea and dysentery diseases by the tribal and rural peoples of Chitrakoot (Mishra, 2015). Mishra (2009, 2014) recorded that ethenomedicinal properties of Lantana camara and Parthenium hysterophous. Dewedi et al (2007), Ekka and Dexit (2007) and Jain (1962) several works on ethnomedicine. 64 species of plants belonging to 37 families plants are used by the rural people treatment and cure many disease in human and animals. The drugs (flower, fruit, leaf, bark and seed) are used to develop many medicinal preparations (Mishra, 2015).

The present study was focused at the identification and determination of families and medicinal properties of Chitrakoot hill plant vegetation. 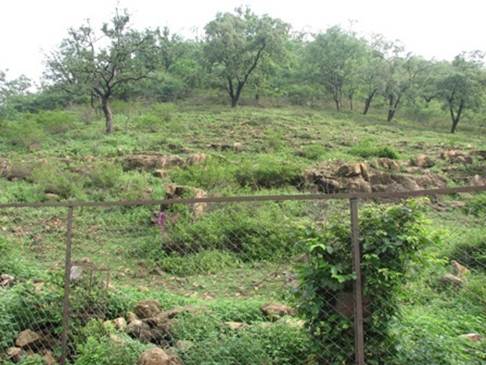 Vegetation surveys of Kamadgiri have been carried out during the years 2012-2014. Data were based on personal contact and observation and interview with local traditional healers and villagers of different localities of the study area. Collection of data of trees, shrubs and herbs species occurring in Kamadgiri hill. Classification of the different species of trees, shrubs and herbs Data synthesis and analysis. The plant identified by published literature.

The observation recorded in table 1 that Verbenaceae is the dominant family having 2 shrub species. Malvaceae, Sterculiaceae, Rhamnaceae, Rubiaceae, Lamiaceae, Euphorbiaceae, Apocynaceae and Asclepiadaceae having 1 species each. 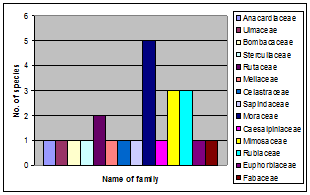 The table 3 data indicate that Moraceae is the dominant family having 5 trees species. Mimosaceae and Rubiaceae having 3 species. Rutaceae and Caesalpiniaceae having 2 species. Anacardiaceae, Ulmaceae, Bombacaceae Sterculiaceae, Meliaceae, Celastraceae, Sapindaceae, Fabaceae and Euphorbiaceae having 1 species each. 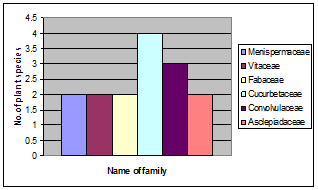 The fig. 5 showing that a total of 159 (107 herb, 25 Tree, 17 Climber and 10 Shurb) species are found in composition of Chitraokoot hill. Some plants are used by the rural people treatment and cure for many disease in human and animals (Table - 5).

Fig. 5. No. of herb, shrub, tree and climber species in Kamadgiri hill.

Table 5. Some enthenomedicinal plants , part used for the treatment of different disease.

Present study showing that a total of 159 (107 herb, 25 Tree, 17 Climber and 10 Shurb) species are found in composition of Chitraokoot hill. Some plants are used by the rural people treatment and cure for many disease in human and animals. Some of the plants reported in earlier study not found due to grazing by animals or environmental stress.