Olive oil became far more important throughout Mediterranean and non-Mediterranean areas, not only as a staple food, but also as a source of energy and a pharmaceutical (Boskou, 2006). Virgin olive oil is the pillar fat of Mediterranean diet. It is made from olive fruits and obtained by squeezing olives without any extraction with solvent (Vitaglione et al., 2015). A part of the beneficial effects of the Mediterranean diet may be due to the presence of "minor components", such as olive oil-derived ortho-diphenols, that exhibit biologically relevant activities (Visioli and Galli, 1998).

According to Visioli and Galli (2001) and Cicerale et al. (2009), experimental data obtained from human and animal studies demonstrate that olive oil phenolics displayed biological properties which may be involved in the reduction in risk and severity of many chronic and degenerative disorders based on inflammatory pathways, cardiovascular-cerebral diseases, breast and colon cancers.

Among olive phenolics, ortho-diphenols including hydroxyl-tyrosol and oleuropein are recognized as the most important in relation to their antioxidant activity which can be related to hydrogen donation, i.e., their ability to improve radical stability by forming an intra-molecular hydrogen bond between the hydrogen of their hydroxyl group and their phenoxyl radicals (Visioli and Galli, 1998).

The purpose of the current study is to investigate and to compare the ortho-diphenol content, as well as the anti-oxidant activity of virgin olive oils of two cultivars (Chemlal and Frantoio) from Biskra, Algeria. The influence of the geographical origin on the investigated parameters was also evaluated on Chemlal which is the most representative olive cultivar in Algeria.

The virgin olive oils of two cultivars (Frantoio and Chemlal) were used in the present study. Frantoio cultivar was harvested from Biskra whereas Chemlal cultivar was from three cultivation areas (Biskra, Skikda and Bouira). The oil samples were stored in amber glass bottles at 4°C in the dark, until analysis.

The phenolic extracts were obtained following the procedure of Mraicha et al. (2010) with slight modifications. Oils (10g) were dissolved in 10 ml of methanol/water 60% (v/v) and 5 ml of n-hexane. After stirring, the mixtures were centrifuged for 15min at 5000 rpm. The hydroalcoholic phase is recovered while the hexanic phase will undergo a twice extraction with 10ml of methanol 60%. The fractions were combined, and washed with n-hexane.

O-diphenol content was determined as reported by Bendini et al. (2003). Olive oil extracts (4 ml) were mixed with 1 ml of sodium molybdate. After 15 min, the absorbance was measured at 370 nm. O-diphenol content calculated from the calibration curve of caffeic acid (y= 20.56x+0.0124; R2 = 0.99) was expressed as mg caffeic acid equivalents per kg of oil (mg CAE/Kg).

The determination of ability of the extracts to chelate iron (II) was carried out according to Decker and Welch (1990). A volume of 250 µl of extract was added 25 µl of FeCl2 (2 mM) and 800 µl of distilled water. After 5 min, 50 µl of 5.0 mM ferrozine were added to the mixture and the absorbance measured at 562 nm after 5 min of reaction. The chelating activity was calculated using the following formula:

The data reported were subjected to analysis of variance and were expressed as mean ± standard deviation (SD) of three independent measurements. Significant differences between values of all parameters were determined at p≤0.05 according to the least significant difference (LSD) test using the Statistica 5.5 software. 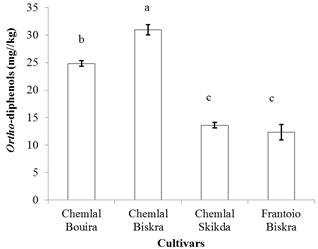 O-diphenol contents recorded in the present study are in agreement with those obtained by Bubola et al. (2014) for Croatian virgin olive oils, Haddam et al. (2014) for olive oil from Morocco and Sousa et al. (2014) for oils of one of the main olive Portuguese cultivar (Cobrançosa). However, the amounts of O-diphenols detected for the samples examined are lower than those reported by Gutierrez et al. (2002) for Spanish varieties (Picual, Arbequina and Hojiblanca) and Guerfel et al. (2009) for Tunisian varieties (26.91 to 261.24 mg/kg). The variations noted could be attributed to several parameters, including the olive cultivar, the degree of olive ripening, and environmental factors (climatic conditions, geographical origin, etc.).

In view of the complexity of diverse oxidation process and the nature of antioxidants, there is no universal method that can measured in a precise way, the antioxidant activity. In the present work, two assays (ferrous iron chelating ability and hydrogen peroxide scavenging power) were carried out to evaluate the antioxidant capacity of the olive oil extracts.

Hydrogen peroxide itself is not very reactive. However, it can be toxic for cells because the super-active hydroxyl radical (OH.) may be formed from the Fenton reaction in the presence of metal ions. Also, excess of hydrogen peroxide produced in the pathogenesis of brain injuries and neurodegenerative diseases may damage cells through direct peroxidation of lipids, and oxidation of proteins. 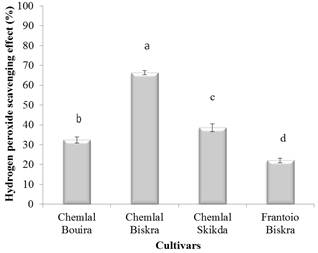 Transition metals have a major role in the generation of oxygen free radicals in living organisms. The production of these reactive oxygen species contribute to the damage of biological molecules (proteins and lipids). 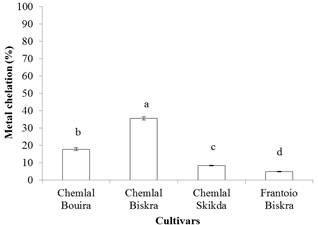 Iron exists in two distinct oxidation states (ferric and ferrous ions). The ferric ion (Fe3+) is the relatively biologically inactive form of iron. However, it can be reduced to the active ferrous ion (Fe2+), and oxidized back through Fenton type reactions, with production of hydroxyl radicals. Consequently, the chelating agents of transition metals such as iron may have an essential role for antioxidant defense in the biological systems and food matrices.

Concerning the ferrous iron chelating capacity, its values varied significantly (p<0.05) between the investigated oil samples. The results of iron chelating capacity by extracts of different samples are shown in Fig. 3. For the analyzed oils, the highest chelating activity is recorded for Chemlal variety from Biskra (35.60±0.83%) whereas Frantoio cultivar from Biskra exhibited the lowest activity (5.00 ± 0.24%). The differences in the chelating ability between samples could be due to the differences in phytochemical content, under the effect of varietal and geographical factors. Data on ferrous chelating potential of extract of olive oils are not available in the literature.

Relationships were obtained between the O-diphenol content and the antioxidant capacities assessed by hydrogen peroxide scavenging potential (figure 4) and metal chelating ability (figure 5), revealed from their good correlation (R2= 0.96 and R2= 0.88, respectively). The antioxidant properties of the O-diphenols are associated with their ability to form intra-molecular hydrogen bonds between the hydroxyl group and the phenoxylic radicals (Visioli and Galli, 1998). On the other hand, Carrasco-Pancarbo et al. (2006) indicated that the presence of O-diphenols enhances the ability of the phenolic compounds to act as antioxidants. This relationship suggested that the O-diphenols of olive oil extracts might be the major contributors to the antioxidant activities assessed by these methods. 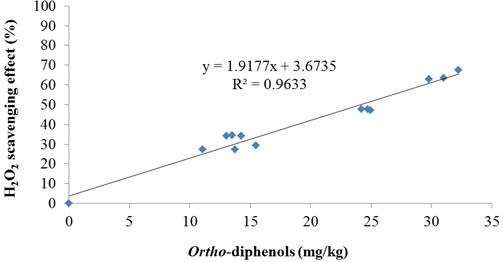 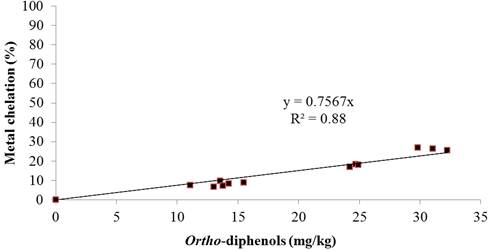 Several studies have been carried out to investigate the free radical scavenging potential of olive oils but to our knowledge, the literature focused on the data on hydrogen peroxide scavenging effect and metal chelating ability is scarce. Results of this study showed a different in ortho-diphenols content, a varietal distinction. Chemlal variety from Biskra contains the highest amount of O-diphenols.

Antioxidant activity evaluated in vitro was conducted by two tests, including ferrous metal chelating potential and hydrogen peroxide scavenging effect. The antioxidant activity of methanol extracts of olive oils varied greatly depending on the variety and growing area. This study provides basic information on the presence of bioactive compounds and antioxidant capacity in olive oil. The results obtained confirm that these oils contribute in the preventing diseases where reactive oxygen species are involved. It will be interesting to carry out research on the identification and structural characterization of different phenolic compounds of these oil extracts.

Thanks are due to all persons who have provided the olive samples of this study.