In this study, a survey was conducted among first class students of the faculty of veterinary medicine at the University of Khartoum in respect to being stung by scorpions. Data were collected from 200 students in a questionnaire, which includes information on age, sex, location, time of the day and activity when got stung, site of sting, symptoms and treatment. The collected data were analyzed and presented in this communication. The highest cases were reported from Darfur region (36%), followed by Khartoum and Gezira (16%). While, the lowest cases were reported from River Nile and White Nile (4%). 32% of cases were male, while 68% were females students. The average age of the cases ranges from 17–19 years, and most of them got stung in childhood at age of 7 years. Some cases have been got stung several times at different age. The time of the day at which cases got stung varied from early morning, afternoon to night. The activity of the most cases when got stung, was either outdoor activity or at sleeping time. A range of different clinical symptoms were reported by the different cases. The treatment adopted by all cases varied between traditional and medical ones. The significance of the above results is discussed in the light of existing literature.

Scorpion sting resulting in envenomation is a life-threatening emergency and causes serious health problems in tropical and subtropical regions. Scorpion sting (SS) cases are particularly common in the central and west regions of Sudan due to geographical location, climate and the socioeconomic structure. There are 1500 subspecies of scorpions worldwide, with 50 subspecies having venom dangerous for humans. In South America, North Africa, and the Middle East, the Leiurus quinquestriatus, Androctonus crassicauda, and Buthus occitonus subspecies are dangerous (Yılmaz et al., 2013).

SSs are relatively common in the Northern and Western regions of our country, and the most common subspecies responsible for stings are the Leiurus quinquestriatus (Abushama, 1961). This scorpion is found in dry habitats/desert areas on different substrate types (but not in sand dunes). The species hide in small natural burrows or under stones etc (Cloudsley-Thompson, 1961); this is one of the world most dangerous scorpion, with very potent venom. This species are medical important, and cause several deaths each year. The reported lethal dose (LD) is of the value of 0.16-0.50 mg/kg of body weight. A previous study showed that only localized reactions occur in 97% of the victims, but the venom can be potentially lethal in children because the severity of the symptoms is weight-dependent. However, antivenin is available for this species, but should be used only for severe cases.

Scorpion venom shows variability by subspecies and has a complex structure composed of neurotoxic proteins, salts, acidic proteins, and organic compounds, thereby having neurologic, cardiovascular, hematologic, and renal side effects, in addition to local effects such as redness, pain, burning, and swelling (Ismail et al., 1994). Mortality due to SSs is associated with cardiac dysfunction and pulmonary edema (Razi and Malekanrad, 2008). The clinical picture depends on the anatomical location of the sting and the victim’s age, weight and health status (Tuuri and Reynolds, 2011; de Roodt et al., 2003). Although SSs are more common in adults and males, mortality is higher in children (Celis et al., 2007; Gueron et al., 1992).

The aim of this study was to present the epidemiologic and clinical features of 25 cases that have had scorpion sting among the first class students of the faculty of Veterinary Medicine, University of Khartoum.

The estimated population size of Sudan is approaching 40 million. This study retrospectively analyzed the epidemiologic and demographic features of 25 university students out of the class (n=200) who exposed to SS between January 1998 and January 2015. A questionnaire was filled by all students enrolled in this study after the purpose of the survey was explained and that no any biological materials will be taken from them neither any medicine will be given to them during the study. The guidance of the parents of some students were sought to fill the forms, when the SS occurred in the childhood. The age, sex, place of the incident, sting location on body, color of the scorpion, systemic symptoms, and treatment received, all were included in the form.

The clinical severity of the reported symptoms of each case was evaluated according to Abroug’s classification (Table1).

Statistical analyses of the study data were performed with the help of the Statistical Package for the Social Sciences (SPSS) v.16.0 software package. Descriptive data were expressed as frequency and percentage. Intergroup differences were analyzed using chi-square or Fisher test, depending on the features of the data. A p value below 0.05 was considered statistically significant.

Among the 200 students who participated in this survey, 25 (12.5%) were stung by scorpion at sometime of their life, 68% (n=17) were females and 32% (n=8) were males. The mean age of the students was 18.48 years. Statistical analysis showed a non-significant difference between genders in terms of SSs (p>0.005). Cases distribution according to age and sex is shown in Table 2.

Table 2. The distribution of the scorpion sting cases according to age and sex.

As shown in Table 3, the place of residence was rural region in 11(44%) cases and urban in 14 (56%). The distribution of the first year students according to the regions of Sudan as well as the estimated population in each region of Sudan is illustrated in Figure 1 and Figure 2, respectively. The distribution of cases according to their region is shown in Figure 3 and Figure 4. There was no significant difference between SS incidents in terms of place of residence (p>0.005). The majority of victims were stung by scorpions while they were at active work (afternoon) (40%) or at night (sleep) (28%) in bed. Eight (32%) cases were stung by a scorpion in the morning while putting on their own clothes (Table 3). The location of scorpion sting varies from one case to another. Most of the cases had sting either at fingers (32%) or toes (36%). In respect to the clinical signs, most of the cases have shown pain (96%) and swelling (92) at the site of the sting. While 80% have shown excessive sweating, 76% chills after the scorpion sting. None of the case has neither cardiovascular nor neurologic symptoms. Only 3 cases (12%) have respiratory problems. Nearly half of the cases (48%) have nausea or vomiting. 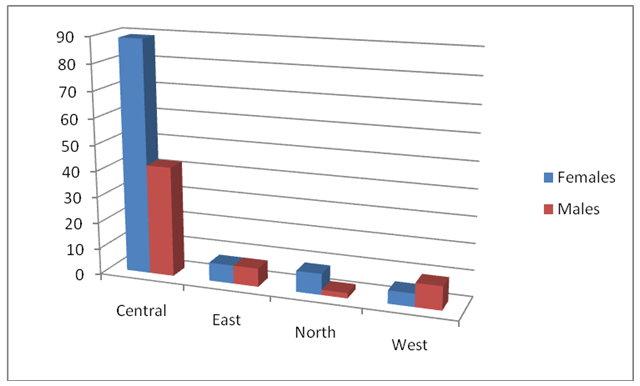 Figure 1. The distribution of the first year students according to the regions of Sudan. 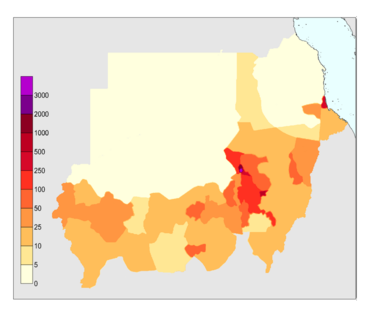 Figure 2. The estimated population in each region of Sudan. A person for each1kilometer. 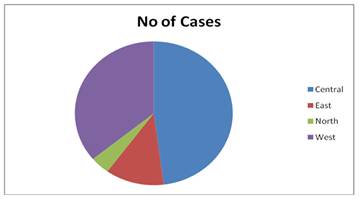 Figure 3. The distribution of the scorpion stings among the first year students according to the regions of Sudan. 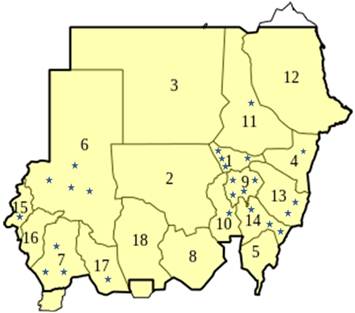 Figure 4. The geographical distribution of the scorpion sting cases according to the Sudan states.

As shown in Table 4, the comparison of clinical symptoms between male and female was also analyzed. The two cases of fever were reported only in female students (100%). The pain, swelling and the respiratory signs were distributed in more or less the same percentage among cases; 65.2 to 66.7% of female students and 33.3 to 34.8% of male cases, while, itching are equally distributed among students (50:50). The sweating and the chills were both have a similar pattern of distribution. Of the 12 cases that expressed nausea, 7 (58.3%) were females and 5 (41.7%) were males, while 3 of the 5 cases that expressed hypertension were females. There was no significant difference between sex of the stung students in terms of clinical signs (p>0.005).

Table 4. The distribution of the clinical symptoms according to the sex.

Scorpions are distributed worldwide, but dangerous SSs are common in North Africa, Middle East, India, South America, southern United States, and Mexico. These dangerous SSs are great problem in some parts of the world with fatalities in children especially younger ones. In Sudan, Leiurus quinquestriatus (Ehrenberg, 1928) or yellow scorpion is responsible of most of the reported stings in this survey. This species is distributed in Africa (Algeria, Chad, Egypt, Ethiopia, Libya, Mali, Niger, Somalia, Sudan and Tunisia) and Asia (Jordan, Kuwait, Lebanon, Oman, Qatar, Saudi Arabia, Syria, Turkey, United Arab Emirates and Yemen).

Scorpions live in jungles, deserts, and rocky areas; they become active at night and feed on insects and sometimes small rodents (Abushama, 1964; Abushama, 1968; Altıntaş et al., 2002). They possess a wide range of colors, ranging from straw color to yellow, from light brown to black.

The clinical representation of SS poisoning depends on the subspecies, age, size, venom amount, and feeding characteristics of the scorpion as well as seasonal conditions (White, 2010). The scorpion venom is a water-soluble antigenic complex mixture of neurotoxin, cardiotoxin, nephrotoxin, hemolysins, phosphodiesterases, phospholipase, hyaluronidases, histamine, and other chemicals (Bawaskar and Bawaskar, 2012).

In this study, all the reported cases from Kassala, River Nile (Berber), Gezira and White Nile states are only female students. While, in Khartoum state, same number of students were reported for both sex. Overall, females predominate, and 68% of the cases were below ten years of age. 84% of them had one sting of which 75% had been caused by yellow scorpion. However, 16% of cases had several stings on their life. Of the symptoms, local pain was very frequent while hypertension and shocks were quite common. Half of the cases received traditional treatment or home management. Very few cases received medical treatment in the form of antiscorpion antivenin.

The time of scorpion sting in some cases is during night or early morning, this may be due to the fact that the scorpion is a nocturnal animal with an endogenous rhythm synchronised primarily by alternating light and darkness (Abushama, 1961). Most of the cases have SS during the summer (64%) and very few during winter (4%). This finding is similar to a previous study in Saudia Arabia (Jarrar and Al-Rowaily, 2008). The ratio between the cases reported during the day time (diurnal) to that during the night (nocturnal) is 3:2. The Majority of the cases had sting in the exposed limbs, especially the lower limbs (toes).

Previous study has shown that the scorpion stings (SSs) in Sudan usually have a mild course. Approximately 94% of the incidents take place at night in homes in the countryside; 88% of cases do not require hospital admission (Mahmoud, 1998).

This study addresses an important clinical question, however, it has some limitations, and for example, the population is consisted from a convenience sample (students). Therefore it is difficult to extrapolate the obtained results to the general population of any region of  Sudan. It should be carried out in the actual population of each region. Another important limitation is that some cases occurred in the childhood which makes it difficult to collect accurate data especially on clinical symptoms. Certainly, there will be some missing information.

In conclusion, this survey confirms the prevalence of scorpion stings (SSs) in Sudan of mild symptoms and without any mortality, suggesting that the type of scorpion venom is weak and is not dangerous like others in different countries.