Effect of Pre-Sowing Treatments on Seed Germination of Tectona grandis

A nursery based experiment was conducted to study the effect of varied pre-sowing treatments on seed germinations of Tectona grandis (Teak). Seeds of selected species were subjected to six different pre-sowing treatments. Results revealed that, the highest germination percentage was observed 86.67% in Pith method, followed by 73.33% in soaking in normal water (72 hours) and 45% in soaking in normal water (24 hours). The highest germination value was found in T4 (21.82) followed by T3 (13.52), 8.37 in T5 (immersion in 80% concentrated H2SO4 for 20 minutes). Our result finds that pre-sowing treatment is obviously better than control. Pit method and soaking in normal water for 72 hours are highly recommended for maximum germination within the shortest period of time. These findings of the research will be helpful to take effective decision regarding the raising of large scale production of Tectona grandis (Teak) seedling in a cost effective way with ensuring their earlier germination.

From the beginning of the earth plants have been playing an important role for human and seeds are one of the most important medium through which plant can survive their existence in this earth (Hossain et al., 2005). Teak (Tectona grandis L.), is an important tropical timber species associated to the family Verbenaceae. The species is naturally distributed in South East Asia mainly Myanmar, parts of India, Thailand and Laos (Kaosa-Ard 1981). In many tropical countries, it is also grown as an exotic species in the continent of Asia, Africa, Central and South America (White 1991). Valuable wood properties including high durability and resistance to chemical give the species highly estimated value (Sandermann and Dietrichs 1959). Today Teak is considered as one of the widely planted hardwood timber species in the world, covering 2.25 million ha (Ball et al., 1999). Due to its high timber value, Teak is also considered as one of the promising timber species in Bangladesh which accounts for 60-70% of the annual plantation area (MOEF, 1993). However, though it has a great economic and medicinal value, people don’t get interest in raising its seedling in nursery due to low germination percentage and more average time requirement for seed germination (Luna, 1996). In fact the drupes germinate slowly and irregularly if it is untreated (Jackson, 1994). This delayed and irregular germination of seeds in the nursery is a serious constraint for T. grandis for efficient nursery management and plantation establishment. Therefore it is essential to find out some pre-sowing treatments of their seeds for ensuring their earlier, successful germination. This will help people to minimize their production cost of seedlings on a broad scale. A considerable body of evidences suggest that pre-sowing treatments strongly enhance the germination process (Hossain et al., 2005; Palani et al., 1996; Azad et al., 2010a,b). A good numbers of studies also carried out on about breaking the dormancy of seed in order to ensure their faster and maximum germination (e.g. Palani et al., 1996; Alamgir and Hossain, 2005). However, research findings related to the pre-sowing seed treatments of T. grandis, are very scared. In addition, the studies are associated mainly with seedling growth performance of Teak but no detailed experiment to evaluate effects of fast and successful germination of Teak seeds (Chowdhury et al., 2008; Kwame et al., 2014).

Consequently, under the present condition, the purpose of the research is to explore the best methods to break the seed dormancy of T. grandis and to find out their germination period, germination percentage and germination value under a number of easily applicable low cost pre-sowing treatments. 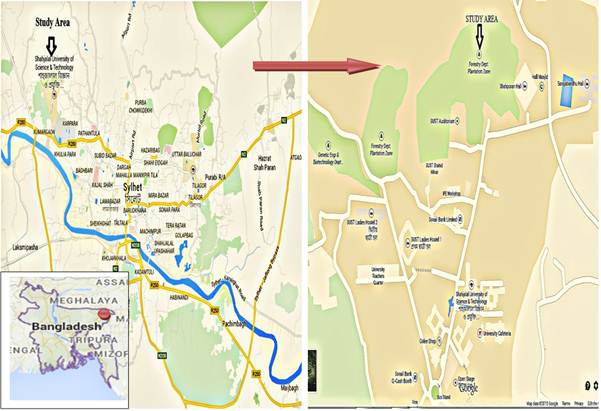 Figure 1. Location map of the study area (marked in red).

The experiment was conducted between the periods of 5th January 2014 to 5th July 2014. in the nursery of the Department of Forestry and Environmental Science, Shahjalal University of Science and Technology (SUST), Sylhet, Bangladesh. It is situated about five kilometers away from Sylhet city (Figure 1). The area stretches over 320 acres landscape of green hill, undulating valleys, moulds, plain grass land and abundant forests. SUST is geographically situated in the north-eastern part of Bangladesh, which lies approximately at the intersection of 24º92´ north latitude and 91º84´ east latitude. The climate of this area are humid subtropical with a predominantly hot and humid summer and a relatively cool winter. Annual maximum temperature is 33.2º C and minimum is 13.6ºC where as annual rainfall is 3334 mm. The soil of this area is generally reddish brown loam to clay loam (Uddin et al., 2008).

Tectona grandis seeds were collected from Shekhghat Nursery, Forest Department, Sylhet, Bangladesh. Seeds of uniform size were selected to reduce non-treatment variation. The potting media used for the filling the poly bags under the experiment were mixture of top and depth hill soil and decomposed cowdung. Soil and cowdung were mixed in a ratio of 3:1. The size of the bed was 5×1.5 m. The nursery bed was made on slightly height above the ground so that water cannot stand for a long time. After that, poly bags were arranged in the nursery beds. Then, the good and healthy seed was sown in each polythene bag after applying pre-sowing treatment.

A randomized complete block design with three replicates was used for the experiment. Seeds were subjected to 6 pre-sowing treatments including controls. Thirty (30) poly bags were used for each replication of each treatment. Therefore, a total of 180 seeds were subjected to six different pre-sowing treatments. The date of applying pre-treatment and sowing date were also recorded.

The treatments used in the experiment are as follows:

*"Pit method" is widely used for seeds of Teak and similar hard-coated seeds. A pit was dugged of 2-3 feet deep and 3-4 feet square and filled with water. Seeds were soaked for 72 hours in normal water and then kept in water during the day period under the sun, then put in the pit with layer of moist leaves (Teak) and finally covered with 6 inches of soil. 5 bamboo pipes, one in the middle and one each in the corners were placed. So that water can reach in all layers. Seed were kept in the pit for about 5 days and watering was done in every alternate day through the bamboo tubes.

The germination value (GV) which is a composite value that combines both germination speed and total germination provides an objective means of evaluating the results of germination (Hossain et al., 2005). It was calculated by using the formula (Djavanshir and Pourbeik, 1976) as below-

GP = Germination percentage at the end of the test

DGs = the total germination obtained by adding every DGs value obtained from the daily counts.

N = the total number of daily counts, starting from the date of first germination

The data was collected by observation and measurement. The effect of pre-sowing treatments was assessed periodically through germination and initial growth performance of the seedlings in the nursery. The germination was recorded everyday from the date of sowing seeds and continued till the last germination (43 days after seed sown). In this period; the number of species that germinate and the time required for germination for each treatment were recorded.

Seed germination started in 14th days after sowing and continued up to 43th days (Figure 2). Cumulative germination percent rose sharply from 14th day to 33th day and remained constant up to the end of germination tests (43th days). 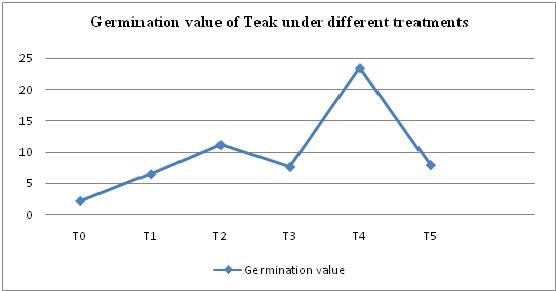 The findings of the results are revealed that pre-sowing seed treatment significantly enhances the germination process. As the seed coat of Teak is hard, it takes more time to germinate with lower germination percentage in nursery establishment. However, effective pre-sowing treatments can ensure their successful germination. Among the treatments applied in the experiment, the best effective treatment found for Tectona grandis was Pith method in respect to faster germination, higher germination percentage and germination value. Since seed germination under soaking in normal water for 72 hours is quite simple and inexpensive, it is also recommended for Tectona grandis on a broad scale. Concentrated H2SO4 treatment is not recommended as it is a costly and troublesome method to be applicable in local farmer level on a broad scale. The result of the study will be helpful for the nursery practitioners to know the effect of pre-sowing treatments on germination and thereby they can apply these treatments to get best quality seedlings within the shortest period of time. However, research related to growth performance of Teak after seedling stage is relatively rare. It has well recognized from many literatures that growth performance of many species is also associated with pre-sowing seed treatments. So, further studies are highly recommended on biomass production of Teak seedlings and their volume production performance including their root length, shoot length, leaf number, collar diameter and vigor index under different pre-sowing treatments of their seeds. It will be largely helpful for large volume production of quality timber of Teak in a cost effective way.