This paper aims to cluster Castanea sativa based on morphological variations of leaves and fruits. Therefore, the main and natural existing sites of sweet chestnut including Shaft, Fouman and Shafaroud were considered in Guilan province. From each site, 10 trees with various morphological traits with at least 100 meters distance from each other were selected. Leaves and fruits were sampled from selected trees. Totally, the number of 30 samples of fruits and leaves were provided individually. The ANOVA results of quantitative traits (e.g. the length, the width of the lamina, special form of the leaf, total and relative length of the petiole, the leaf basal shape, fruit weight, seed weight and healthy seeds weigh) showed significant difference in the three study areas. It was concluded that the morphological traits such as leaf, the width of the lamina, the relative length of the petiole, the leaf tip shape, lamina shape, seed weight and healthy seeds weight were the most important elements in shaping of cluster.

Natural Forests of northern Iran along with European Remnant Hardwood Forests belong to the Holarctic (TAHERI, 2011) and are categorized in Qurerceto-Fagetea kingdom ((TAHERI & PILEHVAR, 2008). European chestnut with scientific name of Castanea sativa is a species of flowering plant in the family Fagaceae, native to Europe and Asia Minor, and widely cultivated throughout the temperate world(LITTLE, 1953), which is found in the forests of Guilan province specifically in four sites with acidic soil called Veis-roud, Siah-mazgi, Shafa-roud and Ghaleh-roudkhan. In Iran, Castanea sativa was firstly discovered in 1340 by Prof. Hossein Jazireyee. Chestnut is distributed in altitude ranges from 200 to 600 m most likely in west and north aspect with approximately slope of 50 to 70 percent (HEDAYATII et al., 2003). Sadly, the seed collected by villagers for consumption, economic and social problems, including grazing land net type chestnuts minimum levels declined gradually reduced the number of acres have been thus eroding precious treasures as would be expected genetic distance (HEDAYATI, 2003). Certainly, considering more substantial protection and proper management for this species is depended on our knowledge about ecological needs and genetic diversity of this valuable species. One of the oldest classification methods of vegetation is to investigate plants based on morphological characteristics (WANG et al., 2001). Generally, in tree diversity studies, leaf morphology has been targeted as an important subject (BRUSCHI et al., 2003; MC DONALD et al., 2003;KAFFASH et al., 2008; ZARAFSHAR et al., 2009). The interspecies diversity of two species from Prosopis genus situated in the Central and South America was evaluated considering leaf morphological characteristics (<HARRIS et al., 2003). In a research in England focusing on Sorbus genus separation, fruit morphology differences, fruit body structure and the amount of starch in fruit were employed (ALDASORO et al., 1988). Other studies were conducted in relation to the subject in Iran are as follows; Babayee et al. (2010) investigated genetic variation in Zelkova carpinifolia (Pallas) K. Koch, Yousefzade et al. (2010) studied morphological plasticity of Parrotia persica leaves in eastern Hyrcanian forests and Espahbodi et al. 2006) carried out a research on Sorbus torminalis (L) Crantz, using morphological investigation of fruits and leaves. This paper aims to analyze morphological characteristics of chestnut leaves and fruits, in order to determine the most optimum site in Guilan province with consideration of applying appropriate management on preventing the extinction of this rare endangered species.

At initial point, the three main and natural existing sites of sweet chestnut including Shaft, Fouman and Shafaroud were identified in Gilan province (Figure 1). Site characteristics in the study areas are, illustrated in table 1. In the first half of October in each site, 10 trees with various morphological characteristics with at least 100 meters from each other were selected (MERWIN et al., 1995) and then samples of leaf and fruit were taken from exterior parts of crown among selected trees (AAS et al., 1994). The collected samples of each tree were combined together, the number of 10 fruits and leaves were randomly selected. Totally, 60 samples including 30 fruit and 30 30 leaf samples were gathered for morphological analysis. It should be noted that, the codes from 1 to 10 belong to the sample from Shaft region, 11 to 20 are taken from Fouman area and 21 to 30 are classified in Shafaroud site. The measured traits were including petiole length, lamina length, lamina shape, lamina width, relative petiole length, lamina width of 0.1 leaf length, lamina width of 0.9 leaf length, basal leaf shape, the leaf tip shape, angular leaves base, leaf area index, wall fleshy fruit weigh, large diameter fruit, small diameter fruit, seed number, seed weight, number of healthy seed and weight of healthy seed (ESPAHBODI et al., 2006). 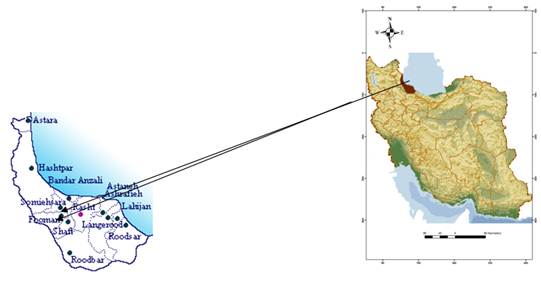 Fig. 1. Location of the study areas.

To analyze fruits and leaves data, ANOVA and Duncan test were used. For categorizing the leaves and fruits, the Principal Component Analysis (PCA) and Cluster Analysis were employed. Morphological analyses were performed using the software Pcord.

Table 2. The average of leaf and fruit morphology traits in study areas.

Significant differences among means within a row (α= .01) are marked with different letters 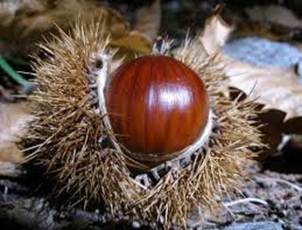 Fig. 3. Sample of leaves and Fruit of chestnut trees. 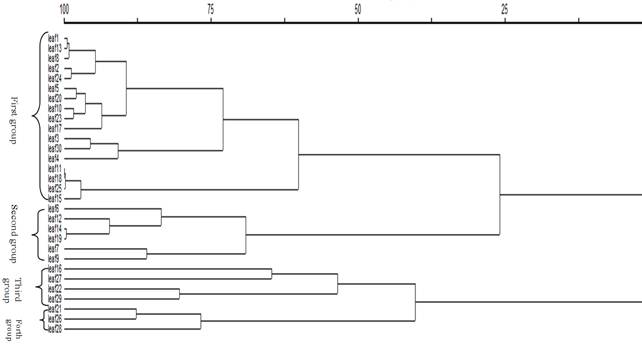 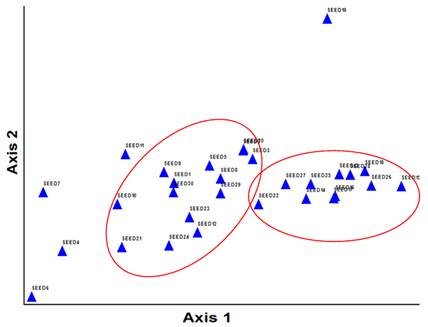 Fig. 6. The scatter plot of fruit resulted from PCA in space coordinate axes based on the first two components. 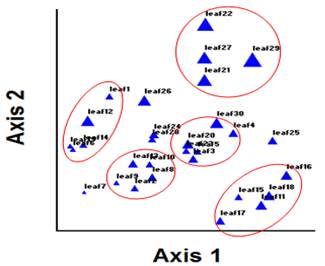 Fig. 7. The scatter plot of leaf resulted from PCA in space coordinate axes based on the first two components.

3.2. Grouping of Leaves and Fruits Based on Morphological Traits

The scatter plots of tree leaves resulted from PCA is showed in figure 7. The figure illustrates that the leaves with various codes are divided into several groups. In fact, leaves with similar morphological traits are classified into a specific group. Also, the scatter plots of the tree fruits are clarified in figure 6. From this figure, it is comprehended that fruits with high resemblance are categorized into a group.

The leaves and fruits are the most important organ for plant production. The leaf structure provides balance between photosynthesis and transpiration (BRUSCHI et al., 2003). Researches have shown that morphological traits in leaf and fruit have an important role in determining the difference between trees in various habitats (SOKAL & ROHLF, 1995). In this study, among three regions there was significant difference between morphological traits of leaves and fruit, such as lamina length, lamina width, lamina shape, relative petiole length, petiole length, leaf basal shape, leaf area index , fruit weight, seed weight and healthy seed weight. This finding was also confirmed by the results of Serdar and Kurt (2011) and Yusef zadeh et al. (2010).