Beauveria bassiana is causative pathogen of white muscardine disease in silkworm Bombyx mori. Occasionally it is responsible for heavy losses to silk industry in many parts of the world. Scrutiny of herbal extracts in the disease management of silkworm, Curcuma longa, Argimone mexicana and Clerodendrum multiflorum showed antifungal activities and these plants were selected for testing their antifungal activities and their doses at 100µl/larva of 6000-ppm concentration were given on calibrated piece of leaf to the B. bassiana inoculated and starved larvae for three consecutive days. Observations on mortality and histopathology of midgut reveals that ethanolic extractive of C. longa has greater potential to check the infection of fungus B. bassiana than the extractive of A. mexicana and C. multiflorum. After making a suitable formulation and evolving farmer friendly strategy of applications, these plant products could be utilized successfully in the management of white muscardine disease in silkworm.

In insect, the midgut is the main site of digestion of food and absorption of digested food besides it known acts as barrier to the variety of parasitic organisms because of chemical composition of gut content, presence of certain non-specific surface inhibitors and the formation of protective peritropic membrane by gut epithelium enclosing the food (Tinsley, 1975). The midgut of B. mori clearly elucidates the columnar cells forming the major portion of the epithelium having striated luminal borders and the goblet cells are intermixed with columnar cells. The epithelium is protected by a peritropic membrane and has regeneration capacity.

White muscardine is the well-known disease of silkworm caused by an entomopathogenic fungus B. bassiana. Bell, (1974) reported this fungus attacked more than 150 insect species. During 1920-25, this disease wiped out the entire sericulture industry in Italy and France. Due to this disease, losses of 10-40% accounted to sericulture industry in Japan and India (Janakiraman, 1961).

Plants are known to contain several classes of secondary metabolite with diverse biological activity. A wide variety of plant secondary metabolites has been identified as active principles for the treatment of various ailments (Taylor et al., 2001; Ncube et al., 2008). Flavonoids constitute a group of important plant secondary metabolites (Subramani et al., 2004). After the discovery of phytoalexin properties of flavonoids and isoflavonoids several investigations have been carried out to evaluate the antimicrobial potential to these compounds (Ramachandraiah and Reddy, 1991; Widenborner and Jha, 1993; Seetharaman et al., 1995; Kuroyanagi et al., 1999 and Kotkar, et al., 2001). Therefore, the present work has been undertaken to know the antifungal effect ethanolic extracts of C. longa, A. mexicana and C. multiflorum on the midgut infection of B. bassiana of mulberry silkworm, B. mori.

The disease free laying (dfls) of popular pure multivoltine race, Pure Mysore (PM) and bivoltine race, CSR2 was obtained from the Directorate, Government Sericulture Grainage Center, Shahupuri, Kolhapur, for laboratory rearing. The larvae were reared as per the method of Krishnaswamy (1978, 1979) and experiments were conducted during January to August 2011 during which four rearing were done.

For the present work, three plants Viz., C. longa, A. mexicana and C. multiflorum were selected on the basis of earlier reports and by arranging preliminary screening experiments for plant extractives.

Fresh leaves of C. multiflorum, seeds of A. mexicana and rhizome of C. longa were collected from fields of Kolhapur District, Maharashtra, India. The taxonomic identification of the plants was made with available literature (Yadav and Sardesai, 2002).

The collected plant materials were washed with distilled water and shade dried at room temperature. The materials were grinded to fine powder with the help of mixer grinder. Then these powdered materials were used for preparation of ethanolic extracts by using 50g powder mashed in 100 ml absolute ethanol for 72 hours. The mixture was stirred every 24 hour using a sterile glass rod and it was filtered by using Whatmans filter paper No.1. At the end of extraction, each extract was concentrated in oven at 300C and paste extract was stored at 40C until further use.

2.5. Treatment of Pathogen and Plant Extracts to Silkworm

The B. bassiana was cultured in Petri plates using Sabouraud’s dextrose agar. Conidia were harvested by scrapping the surface of 3 week old culture into a 250 ml glass beaker containing 50 ml sterile distilled water. A drop of tween -20 was then added to the beaker containing distilled water and conidia. The conidial suspension was prepared by mixing the solution using a magnetic stirrer for 5 min and was then diluted in sterilized distilled water to get the desired concentration based on counts made with an improved Neubauer’s Haemocytometer. Nine spore concentration of the fungus Viz., 101 to 109 spores/ml suspension with three replication of each. The experiment was repeated for four rearings. The LC50 was observed at 1x106 spores/ml for PM race and 1x 105 for CSR2 race.

Newly ecdysed fifth instar larvae of PM and CSR2 were topically inoculated by dipping them in the B. bassiana inoculums suspension of 1x106 spores/ml and 1x 105 concentrations respectively. Five groups were arranged control, inoculated and three groups inoculated and separately of plant extracts treated groups. In preliminary study four concentrations viz., 2000 ppm, 4000 ppm, 6000 ppm and 8000 ppm was used for treatment after 6 hours of the inoculation of pathogen, the larvae were fed with ethanolic plant extract in above concentrations of C. longa, A. mexicana and C. multiflorum by spreading 100 µl ethanolic extracts on 4 cm2 piece of mulberry leaf separately and repeatedly for three days in the morning. Normal and inoculated control groups were fed on normal leaves without any application. The survival rate was maximum in 6000 ppm ethanolic extract treated treatments therefore the same was used for further histological studies in midgut of both races.

2.6. Processing of B. mori Tissues for Microscopic Studies

The worms were dissected out in Insect Ringer. The midgut tissues washed in chilled Insect Ringer and then fixed in Bouin’s fixative for 24-48 hrs, dehydrated in the graded alcohol series, cleared in xylene and embedded in paraffin wax. 5 to 7 µm sections were taken, processed for staining with haematoxylene and eosin (HE) (Humason, 1963) and specific fungal staining by Periodic acid Schiff’s (PAS) reaction as per Hotchkiss-McManus method, (McManus, 1948) using fast green as contrast stain.

The entomopathogenic fungus B. bassiana infects economically important insect silkworm B. mori. It causes the most contagious fungal disease, white musacrdine, and the disease has been responsible for severe cocoon crop loss frequently in all the silkworm rearing areas of the country. 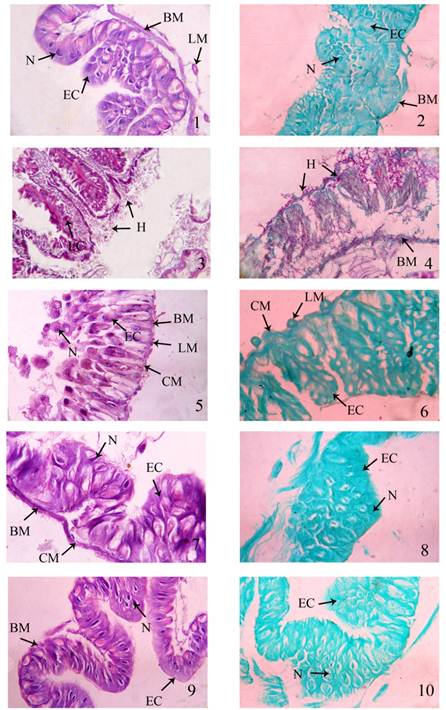 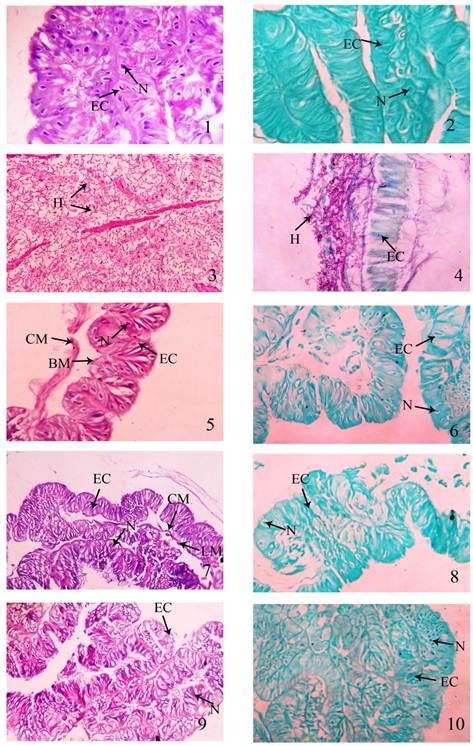 In the fifth instar larvae of silkworm B. mori the midgut represents the largest part of alimentary canal and extended from the 2nd to 9th abdominal segments. The wall of the midgut is composed of outer muscle layer and inner epithelia layer. The midgut epithelium is greatly folded and rests upon a basement membrane. The epithelium of midgut secretes a fine peritropic membrane in the lumen throughout the life of larvae. The midgut was externally covered by circular and longitudinal muscles towards the outer side of the midgut. The epithelial cells and the muscles of the control midgut of PM and CSR2 larvae appear to have normal histological features (Plate-I Fig. 1 and 2, Plate- II Fig. 1 and 2). The cells of midgut epithelium were differentiated into three types- Columnar cells (CC), Goblet cells (GC) and regenerative cells (Mathavan et al., 1989). The CC are tall and closely associated with each other so that their boundaries are indistinct. They are interspersed apically with goblet and basally with RC. The CC possesses a fine brush border facing towards the lumen. The GC is large flask or vase shaped, modified epithelial cells. The GC contains centrally the oval nuclei and bulk of cytoplasm in the basal region. They apically open in the lumen of the midgut. The RC are small and irregular shaped. They are wrapped partially by the basement membrane. These cells can be sharply distinguished from rest of the epithelial cells due to their basal location, small size, centrally located large spherical nuclei with granular cytoplasm.

In case of B. bassiana inoculated larvae the epithelial cells of the entire midgut epithelium were invaded by the fungal mycelia extensively and in the HE stained tissue the disturbed structure of midgut epithelium was observed in both races. When specific fungal staining technique (PAS) was used, in the infected midgut tissue the fungal growth in the tissue stained reddish or pink in colour in both PM and CSR2. The fat bodies, circular and longitudinal muscles of the gut were also get invaded by the hyphae and they stained reddish or pink (Plate-I Fig. 3 and 4, Plate- II Fig. 3 and 4). Almost all the tissues and muscles of the gut were shrunken in size and get compacted lost their original shapes due to fungal manifestation. Results on the similar observed by Jhansi (2000). She observed compactness of the tissues in infected midgut due to pebrine disease.

The ethanolic plant extracts treatement with C. longa, A. mexicana and C. multiflorum after inoculation of fungus showed the significant control (Plate-I Fig. 5, 6, 7, 8, 9 and 10, Plate- II Fig. 5, 6, 7, 8, 9 and 10) because the treatment of these plant extractives within six hours of inoculation probably preventing the establishment of fungal infection in midgut and other tissues of infected silkworm larvae and there was no damage to the midgut epithelium resulting into the survival and subsequent cocooning. The antifungal activities of these plants were reported by (Suresh et al., 1997; Rana et al., 1999 and Khanna, 1999). Barnabas and Nagarajan (1988) reported that, flavonoides extractives prepared from Eucalyptus teriticinis exhibited antifungal and antibacterial activity against several test organism including Aspergillus flavipes and Candida albicum. The secondary metabolites of plants like terpenes and terpenoids are active against fungi reported by several workers (Ayafor et al., 1994; Harrigan et al., 1993; Kubo et al., 1993; Rana et al., 1997; Rao et al., 1993; Suresh et al., 1997; Taylor et al., 1996). The plants secondary metabolites like alkaloids and flavonoids have been known to have antiviral, antibacterial and anticancer agents (Ahn, 1994; Silva et al., 1996; Iwu, 1999; Iwu et al., 1999; Scheck et al., 2006). Two antifungal compounds nimonol and isomeldenin have been isolated from the uncrushed green leaves of Azadirachta indica (Suresh et al., 1997). Manimeghalai and Chandramohan, (2005) used the botanicals Thuja orientalis L. and Curcuma domestica V. inhibiting the growth of Bacillus thuriengensis (flacherie) and in 2006 used Psoralea corylifolia and Plectranthus amboinicus L. for management of grasserie disease of silkworm B. mori.

The results of the present study revealed that the vegetative hyphae penetrated the tissue of the midgut and attacked the epithelial cells in the advanced stage of disease. Midgut tissues get destroyed by the toxins or substances secreted by the fungal hyphae as reported by Yanagita and Iwashita, (1987). The gut epithelium of PM and CSR2 larvae was infected with hyphae of inoculated control group but the treatment of ethanolic plant extracts under study preventing the penetration of hyphae in the midgut tissue of more than 65% of larvae.

Hence, it is concluded that B. bassiana causes the severe damage to the midgut tissue but due to the application of plant extracts having antifungal activity there was no germination and penetration of mycelia in the gut and other tissues and due to which survival rate is 60 to 65% and the silkworms were able to complete their life cycle normally. Therefore, these plant products could be useful to the sericulture industry in the muscardine management after standardizing the doses and making suitable formulation for application.

Authors are thankful to UGC, New Delhi for financial assistance and Head Department of Zoology, Shivaji University, Kolhapur for providing laboratory and other infrastructural facilities.