Protecting ecosystems in the vicinity of rapidly urbanizing areas requires continuous monitoring and assessment. "Kirala Kele" sanctuary located in Matara city limits of southern Sri Lanka is a well known bird habitat. Recent development projects implemented in surrounding areas might affect bird diversity and abundance in "Kirala Kele" habitat. Hence the objective of the present study was to study the status of aquatic birds in "Kirala Kele" sanctuary. Study has been conducted weekly basis from October to December 2015 at selected sites in "Kirala Kele" area. A total of twenty three species of aquatic birds were recorded in this study. Number of species and their abundance recorded in this study were significantly low when compared to a previous study indicating a possible declining of habitat quality for aquatic birds in the current context. Lesser Whistling Duck (LWD) and Purple Swamphen dominated the study sites throughout the study period. Open marsh areas with low grass heights might support LWD. Abundant distribution of Purple Swamphen might be supported by spread of aquatic weeds and suitable nesting sites. Flocking and comfort behavior patterns of LWD noted in this study added a picturesque beauty to the "Kirala Kele" habitats. A small group of Garganey was observed associated with LWD. Egrets, Ibises, Lapwings and Jacanas showed a much more localized distribution pattern. Invasion of aquatic weeds, domination of water logged areas by LWD and diminishing waterlogging areas might be key factors affecting aquatic bird species in the studied habitats. Further monitoring and habitat protection are required to preserve the bird diversity in "Kirala Kele" sanctuary.

Loss of biodiversity is of critical concern as it directly impairs the ecosystem functioning in the long run (1, 2). Habitat modifications and rapid environmental changes are major factors affecting biodiversity loss (3). In this context urbanized environments and associated ecosystems where little natural habitat remains are important in preserving biodiversity (4).

"Kirala Kele" sanctuary is a marshy wetland system located 3 km away from Matara town in Southern Sri Lanka. It covers an area of 1800 ha which is accessible from Matara-Hakmana and Matara-Akuressa roads. "Kirala Kele" is an important wetland which preserves a significant number of flora and fauna. Scattered distribution of Sonneratia caseolaris trees can be seen in some locations. In addition to some other mangrove associated species such as "Wel Kaduru" (Cerbera manghas) and "Keran Koku" (Acrosticum aureum), aquatic flora including "Nelum" (Nelumbo nucifera), "Olu" (Nymphaea pubescens), "Kumudu" (Nymphodes indica) make the site more picturesque (5).

Many species of wetland and terrestrial birds find feeding, resting and roosting habitats in "Kirala Kele" where 103 bird species were recorded; of which 48 are waders (5). Large flocks of Lesser whistling ducks is a common sight and other common birds include the Asian Openbill, Purple Swamphen, Purple heron, Pheasant-tailed Jacana, and Pond heron. "Kirala Kele" not only provides the feeding ground for many bird species, but also provides nesting habitats for many bird species such as Herons, Cormorants, Egrets, Coots, Weavers and Munias. An influx of migratory wetland birds can also be observed during the migratory season from early September to late March every year (5). 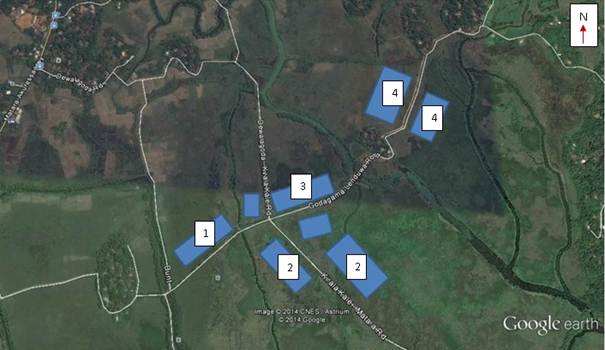 Bird species recorded during the study period is given in table 1. There were 23 species of aquatic birds recorded during the study period. It was notable that number of species and abundance of aquatic birds recorded in this study were far less than when compared to the 53 species recorded in a previous study (5) indicating a possible degradation of breeding, feeding, nesting and resting habitat qualities. In contrary marked increase of the abundance of Lesser Whistling Ducks and Purple Swamphen was noteworthy. Jacanas and Lapwings were only observed at site 4 where much more open areas of water bodies and several paddy fields are located. Jacanas prefer very specific habitat conditions either slow moving or almost stagnant permanent freshwater water bodies with rooted aquatic vegetation with floating broad leaves and Jacanas are considered as effective ecological indicator since its narrow ecological range (7, 8).

The Lesser Whistling Duck (LWD) or Lesser Whistling Teal is a species of whistling ducks that breeds in the Indian subcontinent and Southeast Asia. They are nocturnal feeders and during the day time they can be found in flocks around lakes and wet paddy fields as they are usually gregarious (9). Brown coloured and long-necked LWD has broad wings that are visible in flight. They fly slowly but with rapid wing-flapping and usually produce a whistling call when they circle in the air (9). The species ranges across India, Nepal, Sri Lanka, Malaysia, Singapore, Indonesia, Myanmar, Thailand and Vietnam (10). They feed mainly on aquatic plants as well as grains from cultivated rice apart from small fish, frogs and other invertebrates. They dabble as well as dive in water. They often waddle on the land and Common Mynahs have been noted to follow them on grass (11). These feeding behaviors are nicely suited to "Kirala Kele" environment. Most abundant species inhabiting throughout the area were LWD and Purple Swamp Hen (PSH). Hence, their behavior was observable frequently in each and every visit and they were easy to study due to highest abundance. PSH population was thriving in the studied habitats of "Kirala Kele" probably due to suitability of habitats and availability of nesting sites. Vegetation pattern of studied sites of "Kirala Kele" were perfectly matched with the breeding and nesting conditions preferred by PSH (12).

Sites were examined for occurrence of LWD both temporally and spatially and especially the behavior and their incorporation with other species. According to the observations, LWDs are frequently found as huge flocks ranging from several hundreds to few thousands. But they could always tend to be as couples, mostly male and female, when they are separated from the main cluster. Open marsh areas with low grass heights are more preferred by LWD and scattered water bodies surrounding them are essential to perform comfort behavior. When water level increased than normal levels, probably due to the heavy rainfalls, they tend to leave such areas. They do not seem to feed during day time we observed other than performing comfort behavior such as preening and swimming as well as sudden flapping. They were observed seldom in intense sunlight but mostly found in large flocks during mild sunshine both in the morning and evening. Unlike other birds, most of the time LWD always locate their flocks away from the walking tracks, performing their comfort behavior observable in binoculars and telescopes. If one or a few individuals are disturbed and sprang to the air, almost all the individuals tend to flutter up making a fascinating sight while making their distinct whistling call.

In real, there is a considerable human impact on the populations of LWD majorly due to deliberate illegal hunting. According to the personal communication, a huge flock of teals fluttering is an easy means of shooting with shotgun filled with small iron beads. Therefore their conservation becomes more appreciable other than leaving the area as a sanctuary.

Even though LWDs do not make much assemblage with other waders, one species always found in association with them, referred to as Garganey (Anas querquedula). Garganey is a species which resembles the LWD at a glance in their body features, which could only be contrasted in flight. Garganey has a more or less whitish plumage and bit smaller in body size compared to the LWD. Individuals of Garganey tend to flutter in a level comparatively below that of LWD and tend to land as soon as possible after a sudden up spring. PSH and Common moorhen were observed closer to LWD. Generally PSH, unlike the LWD, always found to be feeding on tender pseudo stems of reeds. Common mynahs in considerable flock sizes were also found around the sites of LWD as indicated by previous reports (11, 13).

Domination of LWD & PSH and occurrence of less number of aquatic bird species when compared to a previous study might indicate the degradation of habitat quality of "Kirala Kele". Development projects taking place in the vicinity might have an impact on Kirala Kele ecosystem. Spread of weeds in "Kirala Kele" area should be monitored and controlled for maintenance of better habitat quality.