The non-specific esterase (NSE) activity was estimated in the midgut of simultaneously and independently treated larvae of silkworm Bombyx mori (Race-PM) with D-galactose and ethanolic extract of Bacopa monniera and Lactuca sativa. Treatments of only D-galactose showed non-significant (p > 0.05) decrease in NSE activity as compared with control group. Concomitant treatment of D-galactose and ethanolic extract of B. monniera and L. sativa showed non-significant change in non-specific esterase activity by as compared with control group. There was significant (p < 0.05) change in NSE activity in the groups treated with only ethanolic extract of B. monniera and L. sativa. The lipid peroxidation and fluorescence was measured to analyze the extent of oxidative stress. The results showed high degree of positive correlation (r =0.8088) between oxidative stress and non-specific esterase activity.

Non-specific esterase (NSE) is a lysosomal enzyme and is co-localized in primary lysosomes and in a large diverse population of autophagic vacuoles (Willard et al., 1984; Jimenez and Gilliam, 1990). NSE enzymes are believed to participate in the intracellular hydrolysis of the ingested material (Bang, 1975; Cheng et al., 1974; Michelson, 1975). The nonspecific esterases are broadly distributed enzymes that catalyze the hydrolysis of ester and amide linkages. They fall into several different classes which can be distinguished by their substrate preferences and their sensitivity to inhibitors.

There is scanty literature available regarding the role of NSE during aging. Therefore, in present work simultaneous and independent treatment of D-galactose, ethanolic extracts of B. monniera and L. sativa in midgut of silkworm B. mori to study the pattern of NSE activity during aging process.

The silkworm larvae of race PM was reared in laboratory conditions at 280C and 80% humidity as suggested by Krishnaswami et al., (1978).

The leaves of B. monniera and L. sativa were washed with distilled water and shade dried for 3 to 4 days. After complete drying the leaves were powdered and kept in ethanol for 72 hours. The alcohol was allowed to evaporate and extract was collected and stored in refrigerator for further use.

2.3. Administration of D-Galactose and Ethanolic Extracts

The larvae were divided into 6 groups containing 30 larvae in each group. The treatment was given during first three days of forth and fifth instars. Mulberry leaves of equal weight were dipped in various concentrations of D-galactose and ethanolic plant extracts (Table - 1) and air-dried. The larvae were fed on the dried leaves once in a day. On the forth day of fifth instar the midgut was removed and homogenized in 0.8% NaCl. Homogenate was centrifuged at 1000 g and supernatant was used as sample.

The lipid peroxidation was estimated by method of Buege and Aust (1987). The reaction mixture contained 1 ml of sample and 2 ml TCA-TBA-HCl reagent (15 % TCA + 0.375% TBA in 0.25M HCl). The tubes were kept in boiling water bath for 10 min. cooled and centrifuged. The absorbance of supernatant was measured at 532 nm on spectrophotometer. The amount of malondialdehyde (MDA) was calculated using extinction coefficient 1.56X105/M MDA/cm2.

Spectroflurometric analysis was performed by method of Dillard and Tappel (1984). 1 ml of tissue sample was taken in clean dry test tube. 6 ml of chloroform methanol mixture was added and the tubes were shaken for proper mixing. The mixture was centrifuged for 10 in at 1000g. 6 ml distilled water was added slowly in test tube and 4 ml of upper chloroform layer was removed to a test tube and 0.4 ml methanol was added. The fluorescence was determined on spectroflurometer and the results were expressed in intensity/mg protein.

The NSE activity from sample was estimated by method described by Subramaniam (1982). The tissues were homogenized in 0.8% saline and centrifuged at 1000g for 10 min. The pellet was discarded and supernatant (sample) was used for estimation of NSE activity. Assay mixture consisted of 0.5 ml tissue sample, 2.5 ml of substrate buffer containing 600 µg/ml α-naphthyl acetate in 50 mM phosphate buffer (pH 7.0), tubes were incubated at 40oC for 20 min. Finally 2.0 ml of arrest regent (1% fast blue RR and 1% sodium dodecyl sulfate in 1:5 proportion) was added. Blank tube contained 0.5 ml of distilled water instead of tissue homogenate and arrest reagent was added immediately. Assay control tube contained similar composition as blank but was incubated along with sample tubes to avoid increase in absorbance due to auto-hydrolysis of α-naphthyl acetate. Finally absorbance of control was subtracted from sample absorbance. The NSE activity was expressed as µg α-naphthol/mg protein/hr.

The soluble protein from sample was estimated by Lowry’s method (Lowry et al., 1951).

Table 1. Groups and treatments given.

D-galactose is a reducing sugar and can be metabolized at normal concentration. However, at high levels, it is converted into aldose and hydroperoxide under the catalysis of galactose oxidase, resulting in the generation of a superoxide anion and oxygen-derived free radicals (Wu et al., 2008). In insects enzymes of defense mechanism includes superoxide dismutase, catalase, ascorbate peroxidase while, non-enzyme molecules are α-tocopherol, ascorbic acid and glutathione besides these dietary flavonoids also play crucial role in nullifying reactive oxygen species. Overwhelming reactive oxygen species cause deleterious effects on biological molecules resulting in lipid peroxidation, protein oxidation, DNA damage and lipofuscinogenesis (Sohal et al., 1995; Standtman, 1992, Finkel and Hallbrook, 2000).

Lipofuscinogenesis is unavoidable process which progresses with aging. Lipofuscin granules accumulate in postmitotic cells causing hurdles in cellular processes. The lipofuscin granules contain non-degradable fluorescent products. The spectrofluorometric analysis of midgut homogenates showed excitation wavelength 360 nm and emission wavelength 524 nm. The intensity of fluorescence was higher in the midgut tissue of D-galactose treated group as compared with the control group (Fig. 2). The intensity of fluorescent products was low in the group treated with ethanolic extract of B. monniera and ethanolic extract of L. sativa treated groups showing their antioxidant properties. In earlier studies Kalamade et al., (2008) reported similar decrease in lipofuscinogenesis in mice brain when treated with ethanolic extract of B. monniera. Similarly ethanolic extract of L. sativa also showed decreased lipofuscin granules in nervous tissue as well as midgut. L. sativa extract contain quercetin which is reported by several authors as potent antioxidant (Havsteen, 2002). 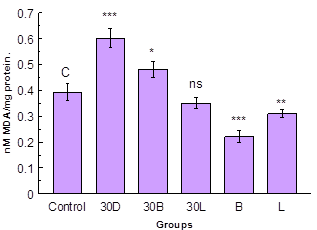 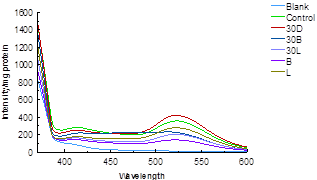 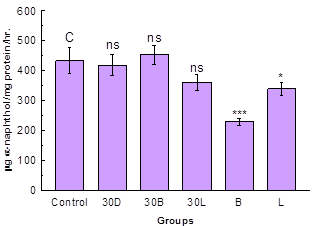 Juvenile hormones are a group of acyclic sequiterpenoids that regulate many aspects of insect physiology. Juvenile hormones play crucial role in development, reproduction diapause and polyphenisms. NSE plays an important role in the metamorphosis of an insect by complete degradation of juvenile hormones (Riddiford, 1994; Wyatt and Davey, 1996; Nijhout, 1994). In Drosophila melanogaster 8 to 16% decrease in esterase activity was observed when the activity was measured on 10, 25 and 57 day of life span (Burcombe, 1972), while in Callosobruchus maculatus NSE activity was found to increase throughout life (Sharma and Sharma, 1981). Our results show there is increase in NSE activity as aging advances.