In this study, density, biomass and diversity indices of selected macrobenthos were assessed from substations along Sheva creek and Dharamtar creek mangrove ecosystems of Uran (Raigad), Navi Mumbai, west coast of India from April 2009 to March 2011. A total of 86 species of macrobenthos representing 61 genera and 45 families were identified comprising of gastropods, pelecypods, cephalopods, polychaetes, sponges, crabs, prawns and shrimps. Higher values of density, biomass and diversity indices were recorded during pre-monsoon and post-monsoon than the monsoon. Diversity values in the study area ranged from 0.203 to 0.332 indicating heavy pollution and the macro benthic fauna is under stress due to discharge of domestic wastes and sewage, effluents from industries, oil tanking depots and also from maritime activities of Jawaharlal Nehru Port Trust (JNPT), hectic activities of Container Freight Stations (CFS), and other port wastes. This study reveals that macro-benthic fauna from mangrove ecosystems of Uran is facing the threat due to anthropogenic stress.

Plants ecosystems are a habitat for a wide variety of species, some occurring in high densities and provide food and shelter for a large number of commercially valuable finfish and shellfishes (Thilagavathi et al., 2013; Manson et al., 2005).Mangroves are one of the biologically diverse ecosystems in the world, rich in organic matter and nutrients and support very large biomass of flora and fauna (Robin and Bazelevic, 1966).

In India, 0.14% of the country’s total geographic area is under mangroves and it account for about 5% of world’s mangrove vegetation(Jagtap et al., 2002). The Indian mangroves cover about4827 km2, with about 57% of them along the east coast, 23% along the west coast, and 20% in Andaman and Nicobar Islands (Venkataraman and Wafar, 2005). Anthropogenic activities involving development projects have resulted in depletion of coastal resources, destruction of mangrove habitats, disruption of ecosystem processes, and loss of biodiversity (Vijay et al., 2005).

Mangroves are inhabited by a variety of macrobenthic invertebrates, which have a profound effect on sediment structure and their biochemical processes by enhancing the porosity and water flow through the sediments (Pravinkumar et al., 2013). Macrobenthic fauna have been studied more widely than others because of their high commercial value (Hu et al., 2009). They play an important role in the cycling of matter and energy in mangrove ecosystems (Koch and Wolff, 2002; Colpo et al., 2011). Benthic communities are highly affected by all the environmental parameters governing the distribution and diversity variation of the macrofaunal community in Pondicherry mangroves (Kumar and Khan, 2013).

Investigation of the population density and biomass of the organisms in creeks and estuaries is useful for the environmentalists to get enough information about the life span of important resource fauna (Pawar and Kulkarni, 2009). It gives a lot of information about the inflow of the young ones, the fry, total biomass, maturity, spawning, breeding and fecundity of the organisms of that region (Thakur et al., 2012).Understanding the structure of the benthic faunal communities in relation to the impacts of pollution is an important part of monitoring changes in mangrove ecosystems in India (Samidurai et al., 2012). Pearson and Rosenberg (1978) have demonstrated that diversity indices provide important insights into faunal communities at different stages in succession. In biodiversity investigations, assessment of diversity indices is essential to determine the community structure of a particular ecosystem (Dash, 2002; Khan and Murugesan, 2005).

The coastal environment of Uran (Navi Mumbai) has been under considerable stress since the onset of industries like Oil and Natural Gas Commission (ONGC),Liquid Petroleum Gas Distillation Plant, Grindwell Norton Ltd., Gas Turbine Power Station, Bharat Petroleum Corporation Limited Gas Bottling Plant, Jawaharlal Nehru Port (JNP, an international port), Nhava-Seva International Container Terminal (NSICT), Container Freight Stations (CFS), etc. These activities affect the quality of mangrove ecosystems (Pawar, 2013).Although many studies have been undertaken to evaluate the macrobenthos of mangrove ecosystems in India, no scientific studies have been carried out on community structure of macrobenthos from mangroves of Uran, Navi Mumbai; hence, the present study is undertaken. Objective of the present study is to evaluate the community structure of macrobenthos in relation to the impacts of pollution from mangrove ecosystems of Uran, Navi Mumbai with respect to population density, biomass and diversity indices. 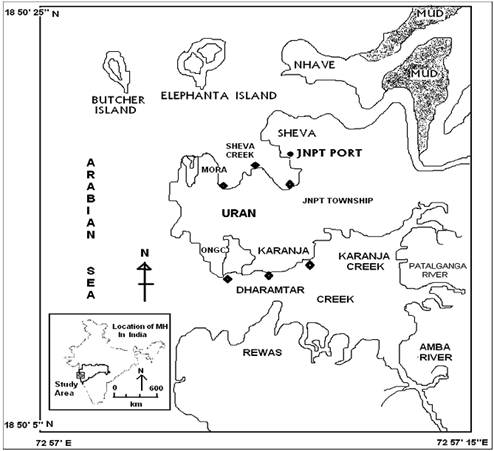 The present study was carried out for a period of two years, i.e., from April 2009 to March 2011. Two study sites, namely Sheva creek, site I (Lat. 18o50'20'' N and Long. 72o57'50''E) and Dharamtar creek, site II (Lat.18o50'50'' N and Long. 72o57'10'' E) separated approximately by 10 km, were selected along the coast. At each site, three sampling stations separated approximately by 1 km were established for assessment of density, biomass and diversity indices of selected macrobenthos.

Number of selected macrobenthos present in one m2 area was considered for assessment of population density. The macro benthos collected from fixed transects of one m2 area, each from upper, middle and lower littoral zones were counted and average number of each species was recorded. Density of each species was expressed as average No/m2 (Parulekar et al., 1976).

Macrobenthos of different species collected from one m2 area were shelled and average wet weight was measured (Mehta, 1994). Biomass of each species was obtained by multiplication of average wet weight with average density and was expressed as g/m2.

Following indices were calculated for the quantification of biodiversity and comparison of species diversity.

ni = Number of individuals of each species in the community

ni = Number of individuals of each species in the community

Where, F = Index of frequency

The mangrove ecosystem of Uran is a tide-dominated and the tides are semidiurnal. The average tide amplitude is 2.28 m. The flood period lasts for about 6–7 h and the ebb period lasts for about 5 h. The average annual precipitation is about 3884 mm of which about 80% is received during July to September. The temperature range is 12–36 0C, whereas the relative humidity remains between 61% and 86% and is highest in the month of August. Four species of true mangroves representing three genera and three families were recorded during present study. The dominant species are Avicennia marina, Avicennia officinalis, Acanthus ilicifolius, and Ceriops tagal. The average tree height is 2.4 m and the canopy coverage is greater than 90%. 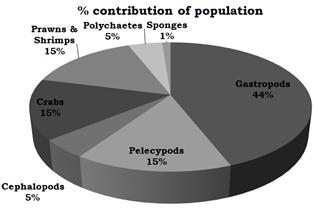 Fig. 2. Percentage representation of species of macrobenthos in mangroves of Uran (Raigad).

A total of 86 species of macrobenthos representing 61 genera and 45 families were recorded from the mangroves of Uran coast. Varied diversity of macrobenthos belonging to gastropods, pelecypods, cephalopods, polychaetes, sponges, crabs, prawns and shrimps is recorded from both sites. Of the recorded species, 44.19 % belonged to gastropods, 15.12 % each to pelecypods, crabs and prawns and shrimps, 4.65 % each to cephalopods and polychaetes and 1.16 % to sponges (Fig. 2).

Fig. 3. Monthly variation of density of selected macrobenthos from mangroves of Uran.

Table 1. Seasonal variation of density of selected macrobenthos from mangroves of Uran.

Fig. 4. Monthly variation of biomass of selected macrobenthos from mangroves of Uran.

Table 2. Seasonal variation of biomass of selected macrobenthos from mangroves of Uran.

Fig. 5. Monthly variation of index of frequency (F) or importance probability (Pi) of selected macrobenthos from mangroves of Uran.

Fig. 6. Monthly variation of index of dominance of selected macrobenthos from mangroves of Uran.

The Shannon’s Index of General Diversity (Η'), was found to be uniform during the period of investigation. Maximum Η'was observed for U. annulipes, which was followed by T. carinifera and P. cultrifera. The Η'of all the species studied was uniform throughout the period of investigation. The data on Η' shows that species richness of P. cultrifera, U. annulipes and T. carinifera was more or less same. These results of Η' are in agreement with index of frequency, index of dominance and rarity index and did not varied significantly (Fig. 8). 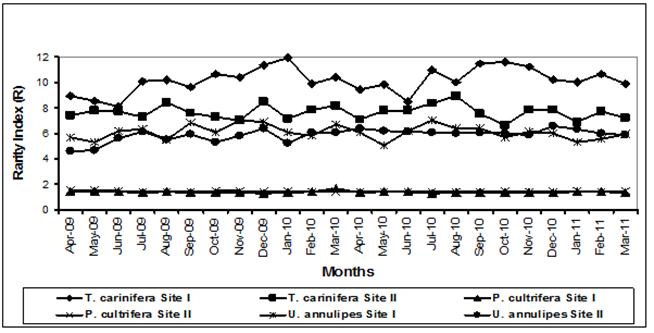 Fig. 7. Monthly variation of rarity index of selected macrobenthos from mangroves of Uran. 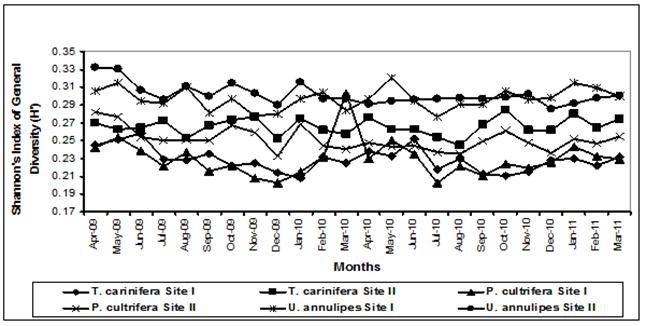 Benthic macro fauna of the gastropods is dominant in Uran mangroves and is followed by pelecypods, crabs, prawns & shrimps, cephalopods, polychaetes and sponges. Similar results on species composition of macrobenthos in mangrove ecosystems were reported by Ngo-Massou et al. (2012), Thilagavathi et al. (2013), Pravinkumar et al. (2013) and Kumar and Khan (2013).

Higher density of macrobenthos recorded during pre-monsoon and post-monsoon is attributed to higher total organic carbon coupled with a stable environment (Thilagavathi et al., 2013). The results of the study are in agreement with Kurian (1984), Saravanakumar et al. (2007) and Pravinkumar et al. (2013). Results of dominance of gastropods, pelecypods, crustaceans and polychaetes in mangrove environment were also reported by Zhou (2001) and Huang et al. (2002). Low species diversity recorded during monsoon is attributed to the influx of freshwater, low temperature and lowered salinity. This is in conformity with Parulekar et al. (1976), Chandran (1987), Devi (1994) and Pravinkumar et al. (2013).

Low biomass and high density of macrobenthos could be due to the recruitment process. Harkantra and Rodrigaes (2004) have reported that salinity is the main significant factor influencing the species diversity, population density and biomass of macrobenthos in the estuarine system of Goa, west coast of India. Results of the study are in agreement with earlier reports of Kumar (2001), Edgar and Barret (2002), Liang et al., (2005), Tang and Yu (2007) and Mahapatro et al. (2009).

The diversity indices calculated for two sites are given in Fig. 5 to Fig. 8. The salinity acts as a limiting factor in the distribution of living organisms, and its variation was due to dilution and evaporation (Pravinkumar et al., 2013). Maximum values of diversity indices recorded during pre-monsoon and post-monsoon are in agreement with the earlier reports (Murugesan, 2002; Ajmal et al., 2005).

The low species richness recorded during monsoon might be due to the low temperature, tidal fluctuation, freshwater runoff containing sewage and low salinity which in turn affected the distribution of benthos. Pawar and Kulkarni (2007) have reported that the diversity indices can be used as a good measure for studying the effect of industrial pollution because industrial wastes and sewage almost always reduce the diversity of natural systems into which they are discharged.

Wilhm and Dorris (1966) and Kumar and Khan (2013) have stated that values less than 1.0 for diversity index (H) in estuarine waters indicate heavy pollution, values between 1.0 and 3.0 indicate moderate pollution, and values exceeding 3.0 indicate non-polluted water. Diversity values in the study area ranged from 0.203 to 0.321 at site I and 0.233 to 0.332 at site II. These values suggest that the mangrove ecosystem studied is heavily polluted and the macro benthic fauna is under stress due to anthropogenic factors.