Endoparasites of Synodontis shcall and Synodontis ocellifer (Upside-down cat fish) from Lower River Benue were investigated. Four parasites (Eustrongylides sp, Procamallanus sp, Microsporidian sp and Diphilobotrium latum) were recovered from the stomach and intestine of the sampled fish species. Of the 658 identified from the two species of synodontis used for the study, Nematodes accounted for 48.48%, cestode (25.53%) and protozoa (25.99%). There was no significant difference (p>0.05) in the parasite load between the two species of fish. It was observed that the intestine of the sampled fish had higher percentage parasite load than the stomach. The females of both fish species had higher parasitic prevalence (52.22% and 53.27%) than the males (47.77% and 46.27%) respectively. Highest percentage parasite infestations of 73.52% for S. Schall and 54.60% for  S. Ocellifer were recorded in the length group between 28.1-38.0cm while the least (1.87% and 6.53% were recorded in the length group between 38.1-48.0cm for both species respectively. Variations in parasite loads existed among the weight ranges of the fish species.

Parasites represent one of the most hazardous threats to fish health; they attack the fish and cause massive destruction of the skin as well as other parts of the body thereby increasing their susceptibility to secondary infections, which could result in the nutritive devaluation of fish and subsequent economic loss (Onyedineke et al., 2010 Sterud et al 2003). Also, parasites compete for food with the host fish, thereby depriving them of essential nutrients and inhibiting their growth leading to morbidity.

Parasitic diseases of fish are very common all over the world and are of peculiar importance in the tropics (Roberts and Janvoy, 2002) but in spite of increasing demands on fishes, not much attention is found on fish health situation like other livestock animals. Of all the vertebrates, fish is one of the most parasitized and the importance of parasitic infection on fish production has largely remained an issue of concern to fish farming. Considering the abundance and economic importance of Synodontis species in the catches of fishes of River Benue, and the dearth of information on the parasites of this species from Lower River Benue, this study aimed at identifying the common endo-parasites of the Genus synodontis (Synodontis ocellifer and Synodontis schall), comparing the parasite loads of the two speciesand determining the relationship between the parasites and total length, parasites and weight and sex of the sampled fishes. Baseline information on the availability of parasites and their site preferences in the Genus synodontis (Synodontis ocellifer and Synodontis schall) from Lower River Benue formed additional rationale for this study.

The study took place in Makurdi the capital of Benue State Nigeria located at Longitude 7°43°N and Latitude 8°32°E. Fig1. The town is divided into the North and the South bank by the River Benue. River Benue exists year round, the water volume fluctuates with season. The river overflow its bank during the rainy season (May-October) but decreases drastically in volume leaving tiny island in the middle of the river during the dry season (November-April). The river contains several species of fish which are of economic importance to the people of Benue State and Nigeria at large. 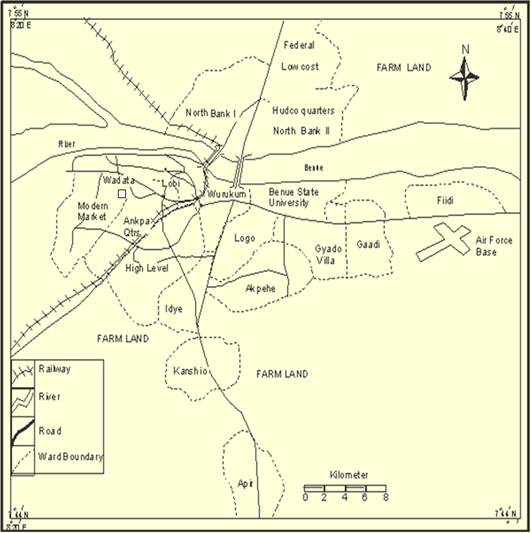 A total of two hundred randomly selected fishes comprising of one hundred each of S. schall and S. Ocellifer of different sizes were bought from Wadata market. Twenty specimens each of the samples from the sampling site was collected monthly for a period of five months and transported fresh to the Fisheries laboratory, University of Agriculture, Makurdi in plastic jars.

2.3. Measurement of Lengths, Sex Determination and Identification of the Sampled Fish

The total and standard lengths of each fish was measured in centimetres (cm) using a meter rule, while the weight of each of the fish was taken in grams (g) using an electronic weighing balance and the sexes of the fish were determined by examination of their papillae.

The stomach and intestine of each of the fish was dissected and the alimentary canals were removed and cut into parts in physiological saline (0.9ml) for parasite recovery.

The stomachs and intestines were further carefully split open longitudinally to aid the emergence of the parasites.

Contents of the stomachs and intestines were further washed into the Petri-dish containing the saline solution. One to two drops of the preparation were placed on slide covered with slips and observed at × 100 magnifications under phase-contrast microscope.

The recovered parasites were sorted out into groups and identified using taxonomic guides by Paperna (1996), counted and recorded.

2.5. Calculation of Prevalence and Mean Intensity

Parasitic prevalence and mean intensity were calculated using the formulae using according to Ezewanji, et al., (2005) as thus;

Chi – square was used to determine differences in parasite load between the sexes. Correlation matrix was used to determine the relationship between weight, length and the total number of parasites in the infested fishes using statistical methods according to social science software (SPSS, version 16.0). 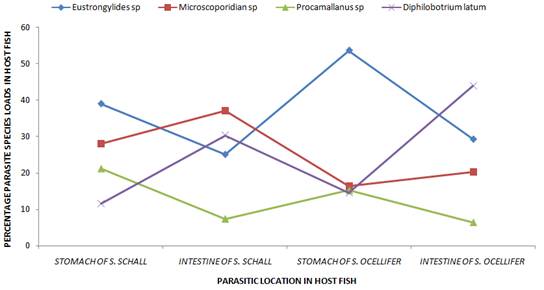 Results of the Relationship between sex and percentage parasite infestations in S. schall and S. Ocellifer are as shown in Figure 3. 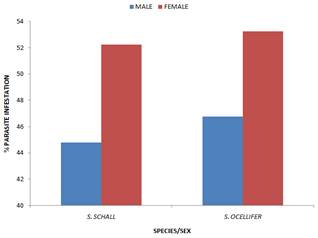 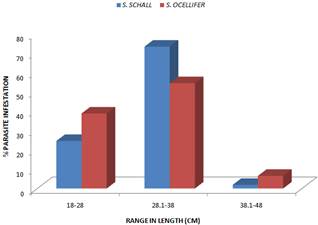 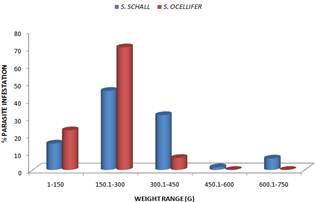 Different parasites were observed and identified in the fishes used for this study. In the reported work of Paul and John (2002), it is common to find a fish harbouring several parasite infections rather than only one single parasite species. In this study, S. schall and S. Ocellifer were infected with Eustrongylides sp, microsporidian sp, procamallanus sp, Diphyllobothrium latum. Eustrogylides sp and procamallanus sp were recovered in the stomachs and intestine of the sampled species. According to Ekanem et al., (2011), Nematodes are known to occur in body cavities or found penetrating subcutaneous tissues. Host specificity of nematodes agrees with the findings of Akinsaya et al., (2007), Olurin and Somorin (2006). The occurrence of Eustrongylides sp and procamallanus sp in the intestine of the sampled species agrees with the reported work of Olurin et al., (2012) who reported a number of nematodes from the intestine of tilapia fish from River Osun.

It is not surprising to find Eustrongylides sp in the fish species in River Benue because of the presence of aquatic birds around the river. Saayman et al., (1991) reported that aquatic birds are important in the ecology of fish parasites because most helminthes complete their life cycles in the host birds.

Differences in the prevalence of endoparasites in male and femaleof S. schall and S. ocellifer could be as a result of their physiological state. According to Aloo et al., (2004), the main reason for the differences in parasitic load with sex is physiological. Emere and Egbe (2006) also stated that females are more susceptible to parasite infection during breeding seasons, that most gravid females could have had reduced resistance to infection by to infection by parasites. In addition their increased rate of food intake to meet requirements for the development of their egg might have exposed them to more contact with parasite which subsequently increased their chances of been infected. Omeji and et al., (2011) also made similar observations.

The basic function of the immune system is to protect an organism against infection in other to minimize the fitness costs of being infected, Karoline et al., (2011). The higher rate of infection in the bigger fishes compared to the smaller counterparts could also be attributed to their low immune system.