There is lymph humor/lymphocytopoietic factor (LHF) in various tissues. However, a definite substance or a definite combination of any substances of LHF in thoracic duct lymph remains unknown. Justification for the conception of a new approach to revealing of LHF composition in native thoracic duct lymph is based on a discovery of mitoses in native thoracic duct lymph of normal immature rabbits. No mitoses are strongly detected in native thoracic duct lymph of normal mature rabbits. The aim of the work is to justify a new approach to detection of definite LHF. Two groups of anesthetized normal Chinchilla rabbit males should be formed: group 1- 5 or more adult rabbits, group 2 - 5 or more immature rabbits. The conception of the new approach suggests a certain succession of stages. 1. To obtain native lymph from cistern chyle of thoracic duct with a glass micropipette (Patent № 1495076, Russia). 2. To make lymph plasma from thoracic duct lymph of rabbits of group 1 and group 2. 3. To find a qualitative/quantitative substances composition of lymph plasma in group 1 and group 2. 4. To find the difference between the lymph plasma composition in group 1 and group 2. Consequently, the difference will be the sought-for LHF. The conception of the new methodical approach can be used to study different features of thoracic duct lymph, particularly cells division, identification of lymph humor/lymphocytopoietic factor, that can play a key role in access to cell dividing mechanism and it is the way to elaborate new cancer drugs.

The search of efficient approach to clear understanding of mitosis mechanisms is still under way (1, 2). Regulating machine of mitoses is investigated in normal (3) and pathology, tumors (4, 5). At present mitosis has remained the most important prognostic factor (6). Furthermore, the increase of mitotic index in peripheral lymphoid organs is due to the presence of lymph humor factor/lymphocytopoietic factor (LHF) in body fluid, particularly in the lymph (7, 8, 9). Mitoses can be in all tissues especially in thoracic duct central lymph, because the factor is solute. In addition, it is known that lymphatic drainage plays more important roles in regulating humoral immunity and peripheral tolerance than in effector T cell immunity (10). But a thoracic duct is the main part of lymphatic drainage. Some investigators arose a question whether tissue fluid/lymph, which is natural humoral environment for dermal cells, contains cytokine (s) specifically regulating cultured keratinocytes proliferation and suggested that there may be other (so far undetected) specific cytokines or that the proliferation and differentiation of keratinocytes is an effect of the combined action of all investigated cytokines (9). Thoracic duct lymph is natural humoral environment for its immunity cells. The presence of LHF was shown in thoracic duct lymph of syngeneic rats (7). The same result has been shown by ligature of the cervical lymph duct in guinea pigs. This was the result of dilatation of the lymphatic draining of the thymus and reduction of mitosis in the thymus (11). However, the definite LHF quantitative/qualitative nature in thoracic duct lymph is unknown. The aim of the work is to justify a new approach to detection of definite LHF. Justification for the conception of the new approach to detection of LHF composition in native thoracic duct lymph is based on the discovery of mitoses in native thoracic duct lymph of normal immature rabbits, but no mitoses are strongly detected in native thoracic duct lymph of normal mature rabbits (12). However, at present no LHF has been detected neither in central lymph/thoracic duct lymph nor peripheral lymph and body fluid. Thoracic duct plays a key role in drainage of lymph/body fluid.

It is known that mitoses are an immunity process and mitosis is an extremely important process in an immunity response and a dependent on immunity. So increase of the mitoses number of thoracic duct lymph relate to immunity. Some works were made indicating that there are differences in the innate immune system of young and adult rabbits that contribute to their distinct resistance/susceptibility to RHDV infection (13).

The above mentioned data suggest that the composition of lymph cell environment/LHF of the mature rabbits changes in comparison with the composition of lymph cell environment of the immature rabbits. Substances of LHF in thoracic duct lymph may be: cytokines, hormones, microelements, their combination and any other substances which are still undetected, specific or nonspecific. Taking into account the foregoing and that the key role in drainage of fluid body belongs to thoracic duct, a chance to detect a definite structure of LHF in thoracic duct lymph becomes obvious.

The research should be carried out in two groups of Chinchilla rabbit males: group number one - 5 or more immature rabbits weighing 500-600 g, group number two - 5 or more mature rabbits weighing 2.500-3.000 g. Native central lymph is obtained from thoracic duct (cistern chyle) of anesthetized rabbits (14). The thoracic duct has to be punctured with original glass micropipettes (Russian’s patent No.1495076). Native lymph from thoracic duct can be obtained as much as needed.

The approach should be carried out in the following succession:

2)  To make lymph plasma from the samples of thoracic duct lymph of rabbits of group 1 and group 2 (Fig. 3) 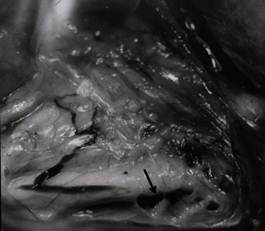 Fig. 1. The chyli cistern of thoracic duct. The arrow points to it. 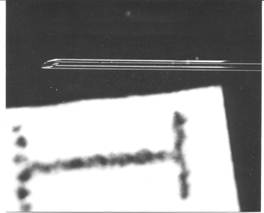 Fig. 2. The glass micropipette with a sharpened tip is the same as an injection needle. There is a character "I" of a typewriter under the micropipette on the photo.

3)  To find a qualitative/quantitative substances composition of lymph plasma of group 1 and group 2;

Consequently, the difference will be the sought-for LHF.

In order to realize the methodical approach a number of methods can be used. A proteomics approach is useful for identifying differentially expressed proteins in lymph plasma, and western blotting can be used for confirming the results of proteomic analysis (15).

The unprecedented increase in the number of new protein sequences arising from genomics and proteomics highlights directly the need for methods to rapidly and reliably determine the molecular and cellular functions of these proteins. One such approach, structural genomics, aims to delineate the total repertoire of protein folds, thereby providing three-dimensional portraits for all proteins in a living organism and to infer molecular functions of the proteins (20). Regardless of the method employed, the ultimate goal of protein fractionation is to enable more protein analysis by today's current proteomics technologies, such as one- (1-DGE) or two-dimensional gel electrophoresis (2-DGE) and liquid-chromatography and tandem mass spectrometry (LC-MS/MS) (21).

Encouraging progress is observed in structure refinement which aims at drawing template structures closer to the native; this has been mainly driven by the use of multiple structure templates and the development of hybrid knowledge-based and physics-based force fields. For free modeling, exciting examples have been witnessed in folding small proteins to atomic resolutions (22). LHF can be a progenitor of multipurpose pharmaceutical as well as strongly peculiar pharmaceutical. In this context, it was discovered that thoracic duct lymph has different immunocompetent cells, including dendritic cell subsets (23, 24). It can be suggested that few DCs mitotic figures can be observed in thoracic duct lymph of immature rabbits only in prophase and they keep their processes.

Also it should be taken into account that dendritic cells (DCs) play a pivotal role in the orchestration of immune responses, and are thus key targets in cancer vaccine design. Since the 2010 FDA approval of the first cancer DC-based vaccine (Sipuleucel-T), there has been a surge of interest in exploiting these cells as a therapeutic option for the treatment of tumors of diverse origin. In spite of the encouraging results obtained in the clinic, many elements of DC-based vaccination strategies need to be optimized (25). It can be suggested that few DCs mitotic figures can be observed in thoracic duct lymph of immature rabbits only in prophase and they keep their processes.

The conception of the new methodical approach can be used to study different features of thoracic duct lymph, particularly cells division, identification of lymph humor / lymphocytopoietic factor that can play a key role in access to cell dividing mechanism and it is the way to elaborate new cancer drugs.

The author thanks Galina Igorevna Kuznetsova for help in translation of the manuscript.

Source of Support: None, Conflict of Interest: None.