A Preliminary Study on Karyotype Analysis of Normal vs. Diseased Nemipterus japonicus off Visakhapatnam, India

Karyotypic and cytogenic characteristics of threadfin bream Nemipterus japonicus described from Visakhapatnam coast, India was studied by examining 200 metaphase chromosome spreads from the kidney cells of 25 healthy and 25 diseased specimens. The diploid chromosome number of this species 2n=60. The karyotype consisted of 18= metacentric (M), 6= submetacentric (Sm) and 36= subtelocentric (St) chromosomes. The chromosome formula can be represented as 2n= 18 M+ 6 Sm+ 36St. No heteromorphic sex chromosomes were cytotypically detected. In diseased fish increased sets of chromosomes was observed causing pathological changes in response to cellular stress, or in state of tumorogenesis. The present study is the first report on the karyology and in particular ploidies of this species. Thus this study is of importance in the analysis of karyotypic trends and role of polyploidy in development of tumours.

Chromosomal studies and karyotyping are the basic requisite for genetic improvement program and conservation of wild gene pool. Such studies were initiated in India (1) and eventually researchers reported the karyotype of about 125 species belonging to both inland and marine waters (2 &3). The threadfin breams consist of the family Nemipteridae within the order Perciformes. They are also known as whiptail breams and false snappers. They are found in tropical waters of the Indian and western Pacific Oceans. Most species are benthic carnivores, preying on smaller fishes, cephalopods, crustaceans and polychaetes; however, a few species eat plankton.

Studies on the distribution and magnitude of abundance of Nemipterus japonicus off the Andhra-Orissa coast (4), an investigation, extending over a three-year period from August 1964 to July 1967, was carried out to study the growth, reproduction and food and feeding habits in N. japonicus.

Cytogenetic investigation has taken a moment in recent years in the field of fisheries which has lost of technical problem. The new source of data involving chromosome number and morphology, has been receiving increasing attention and shows high promise for interpreting the evalution of fishes. Karyotype is the arrangement of chromosomes based on its size, shape, centromere position, length of the arms, secondary contrictions and satellites (5).  The present study reveals the chromosomal composition and karyotype of N. japonicus normal and polyp presented cases.

In the last few decades works have been focused on the field of cytogenetic investigations of fishes, especially in the area of systematics, mutagenesis and aquaculture. The karyotype is the chromosome complement of an individual or related group of individuals, as defined by chromosome size, morphology and number. Though for all somatic cells of all individuals of species, the number of chromosomes is used as an indicator of classification of species of chromosomes and interrelationships within families.

For karyological study, the specimens were transported to the laboratory in sterile condition. Surface of the specimen was sterilized with 70% absolute alcohol and dissected the fish to separate the kidney.

Separated kidney was transferred to a petridish, minced and treated with colchicine solution (0.005 g in 20 ml) 5-6hrs at 37°C. Centrifuged at 1000 rpm for 10 min. Discarded the supernatant, to the pellet added hypotonic 0.075M KCl solution for 45 min and incubated at 37°C. Thereafter, the solutions were centrifuged for 10 min at 1000 rpm, adding 2-3 drops of fresh and cold Carnoy fixative (1:3, Acetic acid: Methanol) before centrifugation. The supernatants were then discarded and 5 ml fresh and cold fixative was added to sediments, mixed thoroughly and then were left for 1 hour. The fixation and centrifugation stages were repeated thrice. The suspensions now were trickled to cold slides. Clean slides are critical for high quality preparation. Dipped in 95 % ethanol and then swirled in distilled water (6). These slides were stained with 2% Giemsa for 5-10 min. Chromosomes were observed, selected and photographed by Olympus light microscope mounted by a camera. Karyotypes were prepared by arranging chromosomes in pairs by size. For each chromosome, the average lengths of the short and long arms and arm ratio (the ratio of the long arm length to the short arm length of chromosomes) were calculated and then the chromosomes were classified according to the criteria (7). Fundamental number (NF) expressed as of twice the number of a telocentric plus the number of telocentric chromosomes. The ideogram was prepared by Spectral Imaging Karyotyping software. 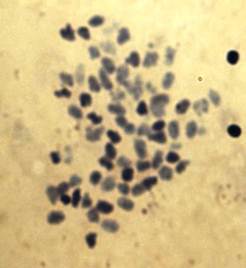 In 200 metaphases from the cells of kidney tissues of twenty five (25) healthy and 25 diseased species of N .japonicus, (males and females) the frequency of diploid chromosome number ranged from 58 to 62 per metaphases and modal chromosome number of this species was found to be 2n=60 which is valid over 86% of metaphase cells as highlighted in Figure 1. Cells different than 2n=60 were probably caused by losses during preparation or additions from nearby cells. The investigation of metaphases showed notable difference in size and type of chromosomes in N.japonicus sps. Chromosome morphology was determined on the basis of arm ratio (7) and chromosomes were classified as metacentric (M), submetacentric (SM) or subtelocentric (ST). The representative karyotype on the basis of centromere position is shown in Figure 2 and the karyotype formula is 2n=16m+8sm+36st. No morphologically different chromosomes related to sex were seen. The morphological and numerical data were summarized. Diseased specimens 90% of metaphases showed polyploidy condition. 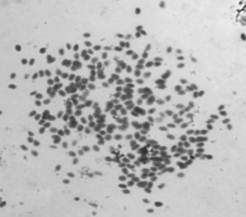 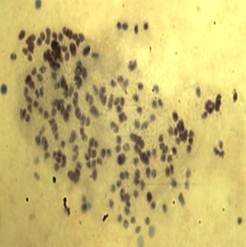 No heteromorphic elements indication sex chromosomes were detected in this species. According to our observations, the diploid chromosome number of Nemipterus japonicus was 2n=60 (Figure 1) and it is not in conformation with the chromosome number of its closely related species. The quantitative data of the different measurements used to classify chromosomes and ideogram are given in Figure 2. The karyotype consisted of 16 metacentric, 8 submetacentric and 36 subtelocentric (16M, 8Sm, 36St). In cases of polyps presented N. japonicus species showed the chromosome number surprisingly increased and showed polyploidy condition. Chromosomal composition revealed that 2n=120 to >200 chromosomes. Occurrence of polyploidy in fishes has been discussed and reviewed by (8 & 9). Polyploidy has occurred extensively, independently, and is often repeated in many groups of fish, from the sharks to the higher teleosts and is more common in the lower teleosts than the higher teleosts, possibly due to an advantage gained through decreased specialization in the lower teleosts, a decreased viability of polyploidy in the higher fish, or both (9). However, in our present study we observed more number of polyploidies in polyp presented or abnormal cases when compared to the normal cases.

In the present study, no cytological evidence was found for sex chromosome dimorphism in Nemipterus japonicus which agrees with reports on many fish species (6, 10-15). Polyploidy is an ongoing process, where ancient events can be obscured in further karyotypic evolution and more recent events can lead to multiple ploidy levels in one species (9). The tumours are proved not to be due to any bacteriological infection and it is supposed that they are caused by foreign substances introduced from the unrelated parents in the same way that the number of chemical agents are known to bring about tumour formation. Genotoxic studies also need to be carried out in polluted water bodies. Polyploidy affects all levels of the genome, from the chromosome to DNA sequence, and can have important consequences for both the arrangement of sequence within the genome and for the sequences themselves (16). Aneuploidy is common characteristic of human cancers and has been proposed as a driver of tumorigenesis (17 & 18).

These findings underscore the importance of assessing the roles of chromosomal instability in tumorigenesis in specific cell types and animal species. In the present study we have examined the question of whether polyploidy can promote tumorigenesis in N.japonicus. These results indicate the presence of chromosomal instability and the emergence of aneuploidy in the sorted polyploid cells. The present study is a pioneering in this aspect and need further studies for genetic characterization of the species.

We conclude that, the presence of polyploidy was due to pathogenic effect and cytological evidence was found for sex chromosome dimorphism in Nemipterus japonicus.

The First Author Expresses Her Gratitude To The Department Of Science And Technology (DST), Government Of India, New Delhi For Giving Financial Support Under The Women Scientist Scheme- A.