There has been massive deforestation in Chiweshe communal lands which has led to aridness of the area. Mazowe Rural District Council wants to engage Chiweshe community in a reforestation program different from the past programs as it includes indigenous tree species. Acacia polyacantha was chosen as the indigenous species to be used and its performance in Chiweshe soils is not known hence the need for this study. The study aimed at assessing the early growth performance of Acacia polyacantha on two sites of Jaji village in Chiweshe, one with sand and the other with loam soils. A completely randomised design was used on each site. Initial height and root collar of the plants was measured on the planting day. The subsequent root collar diameter, height and survival rate of the plants in the two sites were monitored after every three months. The study showed that in terms of height and root collar diameter, A. polyacantha performed better in loam than in sand soils. There was no significant difference in the survival rate of the species in the two sites. Therefore, the study recommends the possibility of using A. polyacantha on either soil type for reforestation purposes.

A forest resources assessment by the Food and Agriculture Organization (FAO) of the United Nations (2010) indicates that worldwide forests cover an area of more than 4 billion hectares. However, deforestation and forest degradation occurs at an alarming rate with about 13 million hectares of forested area being lost every year during the period 2000 to 2010 [5]. Forests, trees and plants are like carbon "sinks" that absorb carbon dioxide from the atmosphere and turn it into oxygen. Large expanses of forest are needed to remove carbon dioxide which is a greenhouse gas contributing to global warming.

Zimbabwe’s forests are threatened by illegal logging, forest land encroachment, gold panning, land conversion for agricultural purposes, firewood collection and resettlement. These threats to the future of Zimbabwean forests are expected to continue and intensify given that population growth and stakeholders are more interested in forested lands rather than the forest itself. A large number of environmental problems will be a direct result of the destruction of the forests: excessive run-off, soil erosion, lowered water tables, desertification and loss of biodiversity [9]. Deforestation often leads to unproductive agriculture and results in abandoned, degraded grasslands that tree species recolonise poorly and this has direct impact on tree diversity.

In the world, many countries have been undertaking reforestation to meet two main objectives: economic development and environmental service [5]. The major justification for reforestation has shifted from health and aesthetic reasons in the 19th century, to soil erosion control and improving water supplies in most of the 20th century, to the current interest in ecological restoration [3]. Reforestation is urgently needed to counter the problems associated with deforestation and to recover the productivity of degraded lands. In Western Australia, for example, there is an urgent need of reforestation programmes to rehabilitate degraded lands left over from mining activities [4], restore degraded farmlands [12] and restore the structures and functions of the declining forests and woodlands [14]. Reforestation in communal areas is hindered by different perceptions of the community.

Chiweshe communal lands is characterised by gullies and silted rivers due to bare loose sand soils in an area with good annual rainfall.The land is either occupied by people or is reserved as pastures for domestic animals. This is a major challenge when talking about reforestation to the community as people prefer reforestation on small scale for a single household though they know negative impacts of deforestation to the whole community.

Of late the Eucalyptus species have been advocated for use in reforestation programs in Zimbabwean communal areas. These species however are being resisted as they have a variety of adverse effects. Therefore, nowadays indigenous species are being experimented with in the restoration of the deforested native forest. Acacia polyacantha is one possible indigenous species that can be used in the reforestation programs. [6] and [1] attributed the ability of acacias to survive to their hardiness and adaptability to a wide range of soil types and annual rainfall, as well as tolerance to droughts and water logging, low nutrient soils and highly saline or alkaline soils. Acacia species are also suitable for reforestation as they have the capacity to improve soil fertility due to the high nutrients in their foliage.

However, according to [2] reforestation undertakings face the prospect of failure if hindrances to natural regeneration are poorly understood. There is need to understand the magnitude of seedling survival if reforestation projects are to succeed. Furthermore, the knowledge on growth performance is needed to assess the species’ ability to provide co-benefits such as fuel wood and carbon sequestration.

Geologically, the area is typically a greenstone configuration composed mainly of basaltic rocks coupled with banded iron formations and volcanic tuffs. The visible features are inselbergs and balancing rocks. The weather in Chiweshe is characterised by a tropical climate with distinct wet and dry seasons. Brief convectional thunderstorms and drizzle mark the wet season (November to March).

With respect to vegetation, none of the original forest exists today in Chiweshe except tiny forest remnants on some mountains. The most common vegetation types are secondary shrub-lands, grasslands and small plantations owned by individuals. The shrub-lands consists Brachystegia species (Brachystegia spiciformis and Brachystegia bohemmii). Acacia species (Acacia polyacantha) can also be found in the area.

This consists of a degraded area located 0.75 km north-west of Jaji Primary School, has the geographical coordinates 16.97699 latitude and 31.11879 longitude. The area is bare, with red loam soils. There are also rocks protruding from the ground exposed by the denudation processes which have taken place over the past decades.

This is a degraded area composed of white sandy soils. The area is located 1.5 km east of Jaji primary school and has the geographical coordinates 16.98261 latitude and 31.11653 longitude. The area has few spots that are associated with Dichrostachys cinerea growth.

A completely randomised design was employed on each of the two sites since the conditions within each site are homogeneous. Thirty plots each with 16 trees at 50 cm spacing were established on each site to give a total of 480 plants per site.

Height was measured on each tree in the plantation using a tape measure. The initial height was measured on the planting day then it was continually measured periodically after three months. The height measured was the length of the stem from the ground surface up to the highest shoot tip as stated by [13]. The collected data were recorded on the recording sheet.

The root collar of each tree in the plantation was also measured on the planting day using a veneer calliper. Subsequent measurements were done periodically every three months. Root collar diameter was measured as the diameter of a tree stem at the ground level.

A one-way ANOVA was used to determine effect of soil type on height and root collar diameter. Standard descriptive statistics was used on plant survival rate.

A. polyacantha established on sand soil type recorded a lower survival percentage compared to those on loam soils as shown in table 1 below.

Table 1. Survival rate of A. polyacantha.

Table 2. A. polyacantha performance in terms of height and RCD.

*Means within the same column with different superscripts are significantly different.

Figure 1 below shows the trend in height development of A. polyacantha between the two soils. 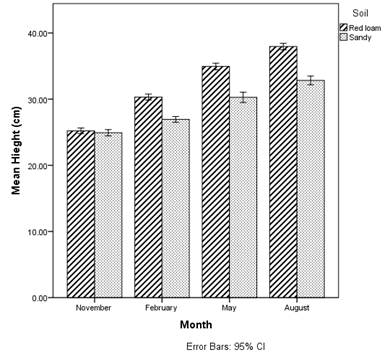 Fig. 1. Height development of A. polyacantha in sandy and loamy soils.

Figure 2 below shows the development in root collar diameter of A. polyacantha between the two soils. 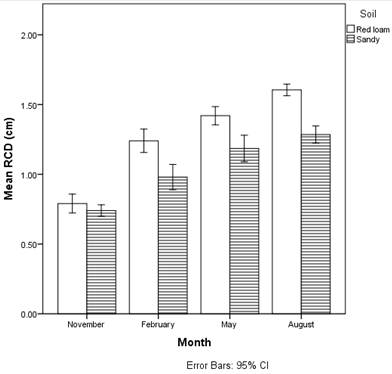 Fig. 2. Trends in Root collar development of A. polyacantha between loam and sandy soils.

The results indicate that A. polyacantha survived in both sand and loam soils although A. polyacantha established on red loam soil survived marginally better. This may be because acacia can survive in wide range of soil types and can tolerate drought conditions and low nutrient soils [6], [7]. The lack of significant differences in the survival rate between the two soils could also be ascribed to the fact that in the initial stages of growth, seedlings mainly depend on nutrients in the pot soil which was the same in the two sites [10].

With respect to root collar diameter and height, in the first three months, there was no significant difference between the two soils. This may be because there were no differences in nutrients as the seedlings were still deriving them from the pot soils. There were also no differences in moisture stress as rains were abundant in November. Also the water holding capacity of the pot soil was sufficient to cushion the roots from the aridity associated with sand soils. However, root collar diameter and height started to reveal differences after 3 months with trees in loam soils performing better. These results also tally with findings by [8] in which Acacia species performed well in loam soils of Chalimbana in Zambia. Lower performance in sand soil might be because of inadequate water supply as sand soil has a low water holding capacity and the plants were not watered but only relied on rains when they were planted in November. Also, coarse textured soils have lower field capacity since they are high in large pores subject to free drainage. A. polyacantha overally performed better in red loam soil than in sand soil after six months. This difference is highly unlikely to be attributable to inadequate water supply only as other site specific factors come into play [11], [15]. Differences in soil nutrients may have compounded the variation in performances between the two soils. Although the seedlings had the same pot soil, they only depend on it in the first six months [10]. After this period, the roots have to obtain nutrients from the surrounding soils as they grow. The nutrient differences between sand and loam soils may therefore be responsible for the difference in performance between the two soil types.

Based on satisfactory survival from the results of this study it is recommend that A. polyacantha may be used in reforestation of the area with red loam soil especially if the objective is also for communities to benefit from fuelwood. Since the survival rate was significantly high in both sites, A. polyacantha can also be used in sand soils in situations where the objective is primarily restorative without regard to ancillary benefits such as fuel wood. The study also recommends a longer observation period, so as to ascertain changes in survival and growth performance of A. polyacantha on the two soil types.