Analysis of the Performance of Paddy Rice Marketing in Benue State, Nigeria

This study analysed the performance of paddy rice marketing in Benue State, Nigeria. The population of the study was made up of rice farmers in the three (3) geopolitical Zones of the State. Multi-stage sampling procedure was used for this study. One Local Government Area was selected from each of the geopolitical Zones. A total of two hundred and forty questionnaires were administered to the respondents. The objectives were achieved using descriptive statistics and Gross Margin analysis while the hypotheses were tested using multiple regression analysis, student t-test and Pearson’s Product Moment Correlation. Majority (68.1%) of the respondents have attained some formal education, (66.9%) have market experience of over ten years, (50.7%) have household size between 6 and 10, (87.3%) are less than fifty years of age, (89.3%) are male while, (65.4%) are small holder farmers with sales income of 200,000 Naira or less per annum. The study also found that Gross Margin per hectare for paddy production in the study area was 112,123.56 Naira while paddy rice marketing was 126% price efficient. The study accepts the alternate hypotheses that states that: the socio-economic characteristics of respondents have significant effect on efficiency; rice marketing in Benue State is profitable and the null hypothesis which states that the rice market in Benue State is not integrated. The study recommends that government should rehabilitate rural feeder roads to enable easy movement of produce and provide credit to encourage increase in farm sizes while marketers should form unions to enable them benefit from economy of scale and enrol for training on entrepreneurship.

Rice has become the most important staple food and the most common cereal food crop in Nigeria (Akpokodje et al., 2001; NCRI, 2004). It is the fastest growing commodity in Nigeria’s food basket (Akande, 2003) with an annual consumption growth rate of 4.4% (IFDC, 2008). In West Africa sub-region, Nigeria is the largest producer of rice (Oyinbo et al., 2013). About 5.4 million metric tons of rice is consumed annually in Nigeria. However, local production accounts for only 2.3 million metric tons per annum while the remaining 3.1 million metric tons is imported. Increasing rice production could therefore, contribute to domestic food security and foreign exchange earnings for the nation.

Rice marketing entails all the activities involved in moving rice from the point of production to where it is needed by the final consumer (Bassey et al., 2013), in the desired form and at the appropriate time. Rao et al. (2012) stated that agricultural marketing plays an important role in stimulating production and consumption and in accelerating economic development. According to Onu and Okunmadewa (2001), market performance includes the relative efficiency of production (that is, price relative to the average cost of production).

Rice production in Nigeria has been unable to keep up with increases in demand over the years. Marketing ought to provide all that is required (access to irrigated land, appropriate farm inputs and market information including agricultural best practices and pricing need etc) to transform the Nigerian rice market. The inability of Nigeria to achieve self-sufficiency in rice production is therefore, due to inefficiency of rice marketing in the nation. The demand for rice is rising speedily at an estimated rate of 10% per annum (NRDS, 2009), due to population growth and urbanization (Adejumo-Ayibiowu, 2010; Inuwa et al., 2011). Even though, there is growing demand for rice in Nigeria, corresponding increase in supply is lacking thereby leading to persistent demand - supply gap. Market performance is a reflection of the impact of structure and conduct on product prices, costs, volume and quality of output (Hill, 1997). Efficient marketing system promotes economic development by encouraging specialization and leading to output enhancement (Olukosi and Isitor, 1990; Tura et al., 2010). 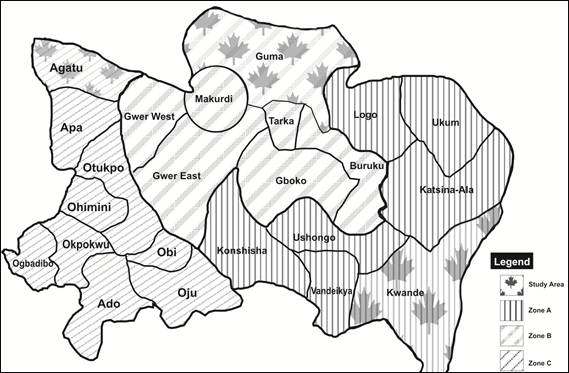 The population of this study is the rice farmers in Benue State. This population is made up of rice farmers (producer marketers) in the three geopolitical Zones of the State namely Zone A, Zone B and Zone C. Multi-stage sampling procedure was adopted for this study. The first stage was the purposive selection of one Local Government Area each from the three geopolitical Zones of Benue State based on rice intensification. The second stage was the purposive selection of two markets in each of the three Local Government Areas earlier selected based on rice intensification. The third stage was the random selection of respondents from the rice farmers in the markets earlier selected. A total of 240 questionnaires were administered proportionately in the study area as shown in Table 1.

2.4. Validation and Reliability of Research Instrument

Educational attainment was measured in number of years;

Years of experience was measured in number of years;

Household size was measured in number of persons;

Age was measured in number of years;

Sales income was measured in Naira per annum;

Efficiency was measured in percentage (%);

Land was measured in number of hectares (ha);

Labour was measured in man-days (md);

Seeds were measured in kilogram (kg);

Fertilizer was measured in kilogram (kg);

Herbicide was measured in litres (lit);

Bag was measured in number/100 kg; while,

Taxes and levies were measured in Naira (N).

The following model used to achieve hypothesis (i);

b = Marketing costs (sum of cost of transport, storage, labour, other costs per 100 kg bag of paddy rice)

X1 =Years of experience in rice farming and marketing (in years);

Three functional forms of the model were tried and the double log form was selected for the analysis based on conventional econometric criteria namely; number of significant variables, the F – ratio, the sign, the Coefficient of Determination (R2) and the adjusted R2. The explicit forms of the functional forms were as follows:

The following formulae were used;

(a). Gross Margin is expressed as follows:

Gross Margin is used when fixed cost is negligible.

(b). Price Efficiency is expressed as follows:

I = Marketing costs (sum of cost of transport, storage, labour, other costs per 100 kg bag of rice paddy)

Marketing efficiency of 100% is perfect efficiency while that above 100% is excess profit.

The following assumptions were observed for the paired sample t-test: (i) the population distribution is normal; (ii) samples were randomly selected; (iii) samples are from one individual; (iv) dependent variable is a continuous variable measure at the interval or ratio level; (vi) there were two levels of the independent variable; (vii) there exist differences in values. If the calculated t is less than the tabulated t, the null hypothesis is accepted. Otherwise, it is rejected.

The socio-economic characteristics of rice marketers studied in this research work include experience, educational level, household size distribution, age distribution, income distribution and sex distribution of respondents. The distribution of respondents by economic characteristics is shown in Table 2. The distributions of educational attainment of respondents in the study area showed that majority (68.1%) of the respondents attained some formal education. This implies that most rice farmers in the study area can read and write.  Education is an advantage for training and skill enhancement planning and implementation for rice farmers by extension service providers since it is easier to train farmers who are literate. Furthermore, education has positive effect on the business acumen of entrepreneurs (Afolabi, 2009). This study is in agreement with the findings of Akpokodje et al. (2001); Akarue and Ofoegbu (2012); Umeh and Ataborh (2007) who stated that most rice farmers can read and write.

The distribution of years of rice farming and marketing experience of respondents indicate that majority (66.99%) of the respondents had over 10 years’ experience in rice farming and marketing. Experience plays a very important role in the performance of any enterprise. The higher the experience in an enterprise, the more informed and skilled, entrepreneurs become. This suggests that the efficiency of rice farmers in the study area would be high. The result is in consonance with Umeh and Ataborh (2007).

The household size distributions of respondents in the study area showed that majority of the rice farmers (50.76%) had household size of between 6 and 10. The result indicates a large household size which can be a source of cheap farm labour. This agrees with the findings of Umeh and Ataborh (2007) and Nwaliejiet al. (2014).

The result of the analysis of sex distribution of respondents showed that there were more male rice farmers (89.34%) in Benue state than Females (10.66%). This is due to the rigorous nature of farm work associated with rice farming which makes females to avoid the enterprise in favour of less rigorous aspects of the rice value chain. The result indicates that gender influences technical efficiency. This result is in consonance with earlier study by Umeh and Ataborh (2007) and Afolabi (2009).

The double log functional form of the three regression equations highlighted in chapter three was selected as the lead equation and used to test the hypothesis which states that the socio-economic characteristics of respondents have no significant effect on efficiency. In Table 3, the Multiple Correlation Coefficient (R) of 0.928 indicates a good level of prediction of efficiency of paddy rice marketing in Benue state. The Coefficient of Determination (R2) value of 0.861 indicates that paddy rice marketing experience, education, household size, age, sales income and sex of respondents explained 86.1% of variation in efficiency of rice marketers in Benue State.

Table 3. Efficiency as a Function of Socio-economic Characteristics of Paddy Rice Marketers in Benue State.

Note: values in brackets are t-ratios; values marked with * are significant at 5% level

In Zone A, the individual t-tests for the independent variables showed that education (X2) and sales income (X5) are significant. The positive (+ve) sign indicates that for any one year increase in education or any one naira increase in sales income of the paddy rice marketers, there will be an increase of 1 % in efficiency of paddy rice marketing in Zone A. This is a priori expectation.

3.2. Costs and Returns from Paddy Rice Marketing in Benue State

The result of the computation of costs and returns of rice farmers in Benue State is shown on Table 4. The result showed that the Total Revenue (TR) is N346,479.76/ha while the Total Variable Cost (TVC) is N234,356.19/ha respectively while the Gross Margin (GM) is N1120,123.56/ha. The return on investment for rice farming in the study area is positive (1.49) indicating that there is greater benefit than cost.

Note: there is no significant correlation; values in parentheses are t-calculated values

The study concludes that the market for paddy rice in Benue State is profitable and efficient. The socio-economic characteristics of respondents have significant effect on the efficiency of rice farming. Furthermore, the market is not integrated. The study makes the following recommendation based on findings:

i.     Paddy rice marketing is profitable. The study recommends that the paddy marketers should form unions and/or reorganize the ailing unions to enable them benefit from economy of scale and seek alternative markets to sell their produce. This will reduce the buyer influence on pricing and increase profitability.

ii.   The paddy rice market is price efficient. However, the markets in the study area are not integrated. This is mostly due to transport bottlenecks, lack of marketing information and lack of scientific grading of produce with the result that prizes do not refer to equivalent grades across the markets. The study recommends that rural feeder roads should be rehabilitated by government to enable easy movement of produce. Also, scientific grading of produce should be enforced across the markets by government. These will improve market integration.

iii.  The marketers are encouraged to acquire more training. This will increase their efficiency and enhance their skill.