Cooking energy represents the main energy consumption in the most Africa countries. As the main fuel for cooking in these countries is wood, this led to problem of deforestation in this area. The increasing demand for fuel and the scarcity of alternative sources is a major factor leading to deforestation. In Sudan, for example, urban growth has created a great demand for charcoal resulting in a loss of some hectares of forests annually through fuel wood extraction. Fuel wood supply to Zalingei city alone had been depleting forests in the surrounding areas at high rates. Consequently, today charcoal is brought from distance of up to 50 km inland. Deforestation has also led to acute shortages of fuel wood in many parts of the country. Women in rural areas are forced to walk long distance up to 6 km or more with heavy burdens of wood fuel. Cooking with sun is a potentially viable substitute for fuel wood in food preparation in most of the developing world (Toonen, 2009). Solar energy which is an abundant, clean and safe source of energy is an attractive substitute for the conventional fuels for cooking.

Sudan lies in the sunny belt of the world. The sunshine period ranges from 10-12 hours daily with average solar radiation of more than 20 MJ/m²/day (Akoy, 2000). The solar radiation intensity is about 6.1 kWh/m2day, which is sufficient to provide adequate energy for solar thermal applications. Solar cooking presents an alternative energy source for cooking.

Solar cookers are broadly divided into three types namely; parabolic, box-type and panel-type solar cookers. The box-type solar cooker is an insulated container with a multiple or single glass (or other transparent materials) cover. This kind of cookers depends on the "greenhouse effect" in which transparent glazing permits passage of shorter wavelength solar radiation, but is opaque to most of the longer wavelength radiation coming from relatively low temperature heated objects. Mirrors may be used to reflect additional solar radiation into the cooking chamber. On the other hand, parabolic solar cookers are direct concentrating cookers with a dish-type reflector directing most of the intercepted solar radiation to a point of focus. Dish-type concentrators require direct sun light to function and must be frequently oriented towards the sun. Advantages include high cooking temperatures. Panel solar cookers or combination cookers incorporate elements of box-type and parabolic cookers. They are simple and relatively inexpensive to buy or produce. The cooker is however, not quite as robust as the box-type cooker, and cannot cook as much food at once as the parabolic cooker (Muthusivagami et al., 2010). Different types of solar cookers have been developed and tested over the world. There has been a considerable interests recently in the design, development and testing of various types of solar cookers.

The procedures followed to evaluate the performance of solar cookers consist of determining one of the following: (і) cooking time for different food products, (іі) the time required for a sensible heating of a known quantity of water up to the boiling point or (ііі) the stagnation plate temperature recorded in a test without load. The second and the third methods are better approaches (Yadav and Tiwari, 1987).

Mullick et al. (1987) proposed a standard test procedure for box-type solar cookers. In this procedure two figures of merit F1 and F2 have to be determined by conducting the stagnation temperature test (without load) and by heating a known mass of water, respectively. 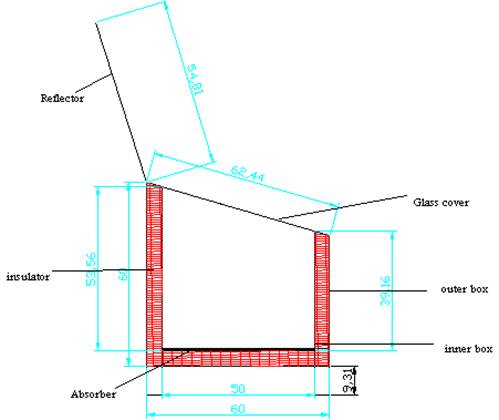 Solar energy has gained further importance in the current global discussions on energy and environment. A few attempts have been made in the past to introduce and popularize solar cookers in Sudan (Mohamed Ali, 2000). Therefore, the objectives of the present study are: (a) - to construct three types of solar cookers and (b)-to test the performance of the constructed solar cookers, using the standard procedure for testing solar cookers.

2.1. Construction of the Box-Type Solar Cooker

A simple box container (0.6m × 0.6m) with front height of 0.2m and the rear of 0.3m was constructed. Absorber plate with 0.5m × 0.5 m made of metal sheet that was painted in black (upper surface) to absorb the sun rays. Sawdust was used as insulator with a thickness of 5 cm and placed at bottom between collector and container and at each side between the collector and the container. All inner sides of the box were covered with aluminium foil as a reflector. A panel of glass sheet 4mm thick (0.55m x 0.55m) was glued on the top of the constructed box as a transparent cover. A reflector with dimension of 0.55m × 0.55m, hinged at the top of the cooker was used to reflect additional solar radiation. Adjustable lever was used for tracking. 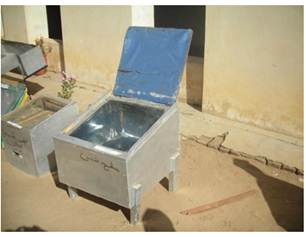 2.2. Construction of the Panel-Type Solar Cooker

A cardboard box (figure 2.) with the height BC greater than the width DC was used for the panel type solar cooker construction. First, the flaps of the box were cut off. Then the carton of the cardboard box was folded out to a flat assembly of five rectangles as shown in figure 3. An aluminium foil was glued to one side of the five rectangles (the inside of the original cardboard box). Finally, a black cooking pot was put on horizontal base CDHG and covered with transparent plastic sheet to avoid convective heat losses (Plate 2.). 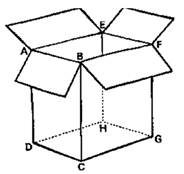 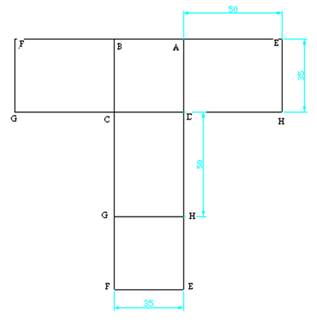 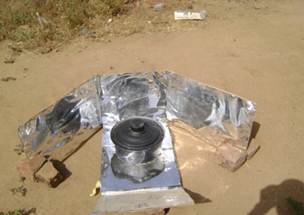 2.3. Construction of the Parabolic Solar Cooker

A discard satellite dish made from metal sheet (plate3.) was converted to a parabolic solar cooker using the parabola equation. The focal point was determined using the following equation (Jennifer, 2003):

a = is the focal point to be calculated (m).

Aluminium foil sheets were glued to the satellite dish as reflector (plate 4). 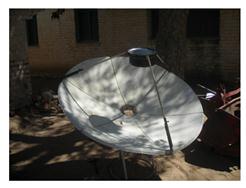 Plate 3. The discard satellite dish with a pot at focal point. 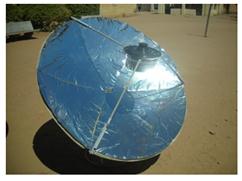 Experiments were conducted on the constructed solar cookers outdoors with and without load during March 2011 to study the effect of load on the cooker performance. The experiments began at 9:00 am and were continued until 18:00 pm. During all experiments, different types of thermometers (digital, dial and mercury in glass) were used to measure the temperature at different locations of the cookers; namely; the cooking fluid, the absorber plate and the ambient temperature also was measured. In addition, electronic balance was used to measure the mass of water.

A simple procedure used by El-Sebaii and Ibrahim (2005) was adopted to evaluate the thermal performance of the three solar cookers. The performance testing procedure consisted of the following:

The measured variables were: ambient temperature, the temperature of the water in cooking pots, the initial water temperature and the absorber plate temperature. A series of tests were conducted on the constructed solar cookers to evaluate performance of each solar cooker and also for comparison purposes.

= difference between the maximum and ambient air temperature.

= time required to achieve the maximum temperature of the cooking fluid (s).

The cooking power of the different solar cookers was calculated using equation given by Kundapur and Sudhir (2009) as follows:

A questionnaire was designed to evaluate the acceptability of solar cookers in the study area. The collected data was analyzed using the statistical package for social sciences (SPSS). 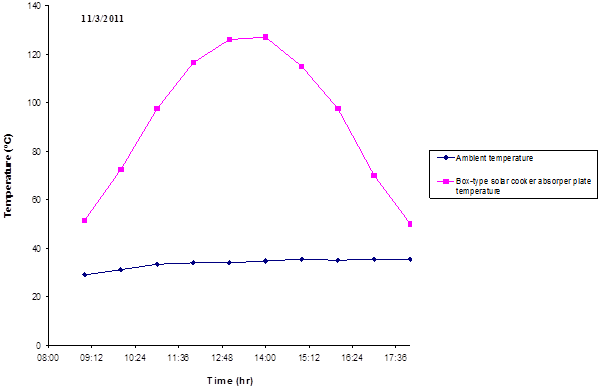 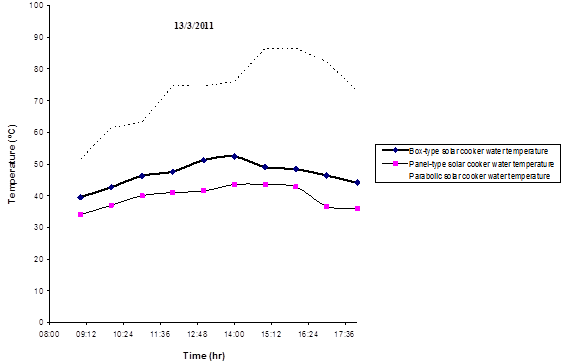 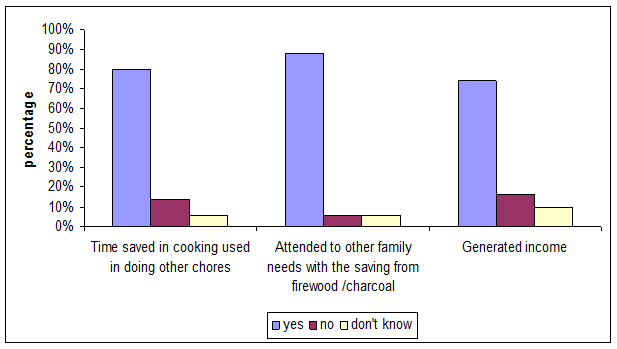 Figure 5. shows water temperature variations plotted versus time. The figure shows that the parabolic solar cooker attained maximum temperature of water (86.5 ºC) then box-type cooker (52.35 ºC) and finally the panel cooker (43.5 ºC). These results indicated that the parabolic solar cooker is the best in term of rising water temperature, then box-type and finally panel type solar cooker. These results were in agreement with findings of Kimambo (2007) and explain the efficiency of the cookers to convert solar radiation into heat.

Table 2. Calculated results of the cooking power of the constructed solar cookers.

Finally, 74% of the respondents believed that solar cookers increased income of the individual and society, whereas 16% of the population refused the idea of income generation because they believed this technique has high initial cost.

The following conclusions can be drawn from this study:

1    The constructed solar cookers were satisfactorily used to heat water.

3    The constructed solar cookers were used to cook meat, rice, cookies and eggs.

4    The constructed parabolic solar cooker could be used to fry eggs and other foods.

5    The constructed box-type solar cooker efficiency was found to be superior to parabolic and panel solar cookers.

6    The use of solar energy in cooking is expected to protect environment and reduce health risks.