Rainfed agriculture in Gedarif state, Eastern Sudan is the main area for producing sorghum, the staple food crop. The conventional farming (CF) system for sorghum is achieved by the use of Wide Level Disk (WLD) for seedbed preparation and seeding plus use of low inputs. The result is low yield compared to the potential. Conservation agriculture (CA) was tested elsewhere and proves its efficiency. It could be accomplished by seeding crops directly in previous crop residues via special planter concurrently with applying fertilizers and herbicides. Sustainable improvement of sorghum yield is necessary to secure food for the growing population this could be attained through implementing a new adaptive cropping system. The objectives of this study were to assess the performance of sorghum under CF and CA in rainfed areas in addition to perform economic analyses. The CA was conducted during two seasons (2012 and 2013) in farmer's fields Southern Gedarif State and compared with the adjacent CF fields. The soil is heavy cracking clay soil. Effective rainfall occurs during July to September. Data on machines performance, soil moisture content, and sorghum yield were collected from each system. Partial budget and sensitivity analyses were executed. The results indicated that CA saved 26% and 25% of time and fuel, respectively. CA significantly out yielded CF by four folds. Economic and sensitivity analysis showed the profitability of CA over CF. Higher and economic sorghum yield could be obtained by using CA. Effects of CA on environment and soil need more experimentation.

Rainfed sector is a major part in agricultural production in the Sudan. Gedarif State Eastern Sudan is the most important rainfed sector. It is the largest rainfed areas for sorghum production, the staple crop. Gedarif rainfed area extends from North to South through three climate zones. Rainfall happens during June to October. The soil is heavy clay soils (Vertisols). There is a short-single growing season a year. The land is continuously cultivated without following a distinct rotation. The conventional farming (CF) compromises the use of Wide Level Disk (WLD) harrowing for seedbed preparation and the same machine is used for broadcasting sorghum seeds besides, the use of low inputs. Seedbed is performed after weeds germination, this delays seeding operation resulting in power establishment and low sorghum yields (450 kg/ha). Improvement of yield and conserving resources are necessary to face the increasing demands for food. In this case conservation agriculture (CA) is possible and justifiable, since in Vertisols soils of the Sudan, field conditions govern the selection of suitable seedbed preparation method (Dafalla and Awad, 2008).

CA referred to a way of practicing agriculture through minimum soil disturbance, incorporation of crop residues and use of suitable crop rotations (Lumpkin and Sayre, 2009). There are many cultural practices that qualify CA definition, such as zero tillage, direct seeding or direct drilling. FAO (2007) defined the CA as ‘resource saving agricultural crop production that strives to achieve acceptable profits together with high and sustained production levels while conserving the environment. CA could be set up by seeding crops directly in previous crop residues via special planter along with applying fertilizers and herbicides. CA is widely practiced worldwide; such as in South America, United States, Canada and, Australia (Shalander et al., 2011). CA has many advantages over CF. It saves time, labor, fuel and energy compared to CF (Cakir et al., 2003). It also improves soil moisture content (Saeed and Eissa, 2002) and it may reduce operation costs. Therefore, CA seemed to be an alternative to CF (Hobbs, 2007) and is promising and justifiable for rainfed sorghum (Yousif et al., 2009). The Arab Authority for Agricultural Investment and Development (AAAID) introduced zero tillage in rainfed areas of the Sudan. However, the integrated effect of CA package was not investigated. The objectives of this study were to assess the performance of sorghum when using CF and CA under rainfed conditions of Southern Gedarif State, Sudan in addition to perform economic analyses.

A project aiming at disseminating and applying the concept of CA to secure food in Arab world was conducted. This project was implemented by the Federal Ministry of Agriculture and Irrigation in collaboration with the Arab Center for the Studies of Arid Zones and Dry Lands (ACSAD). CA was implemented in Southern Gedarif state to demonstrate effect of CA on the yield of some sorghum cultivars during seasons 2012 and 2013.  Researchers and Extension staff were involved.

The CA was conducted in 31ha and 21ha during the two seasons and compared with the adjacent CF fields. The selection of CA sites was based on the following criteria: a) had high annual rain fall, 600 mm and above, b) unplowed fields, c) with acceptable amount of crop residues and d) had not been cropped with sorghum in the previous season, if possible.

Three improved sorghum cultivars; namely Wad Ahmed, Arfa Gadamk and Butana were sown adjacently in farmers' fields, in which the concept of CA was applied. Herbicides application and seeding were started simultaneously in early July for CA in both seasons. Sorghum seeds was dressed against pests; and coated with concept at a rate of 0.4 ml/kg seeds to mask the effect of Dual Gold. In the second season Butana cultivar was not used, because it is early maturing and showed lodging at harvest.

A four rows precision planter with fertilizer boxes was used. It was adjusted to 80 cm row spacing and calibrated to give 14 seeds/m2(1.25 meter length), at 9 cm spacing between plants; and 95.2 kg urea /ha. Tractor of Massey Ferguson was used to operate the planter. Tractor operated field sprayer was used and calibrated to give 119 L/ha. Herbicides like Glyphozate, Dual Gold and Gezaprime were mixed in the sprayer tank and applied at rate of 2.38 L/ha, 1.19 L/ha and 1.19 L/ha, respectively. Row crop planter (RCP) and sprayer were used to establish crops in CA, whereas WLD was used to perform seedbed preparation and seeding operations in CF.

Machines speed, work rate and fuel consumption were recorded. Soil moisture was determined three times during the season at 0 to 20 cm deep. Daily rainfall data for June to October were recorded. Also plant population, plant height and yield were measured. Three to five random samples were taken from each field. Sample size was one square meter for plant population and yield and ten plants for plant height. These data were arranged in a randomized complete block design (RCBD) with four replications. The statistical procedure, analysis of variance (ANOVA) was used to explore the differences between the CA and CF. Moreover, partial budget and sensitivity analyses were conducted. Cost items were collected from project records for CA and from prevailing prices for CF. For sensitivity analysis yield was lowered by 25% and cost was increased by the same rate for CA, while remaining CF parameters as it is. Breakeven point (BEP) was estimated by increasing cost by 25%. The BEP was calculated by dividing the total cost (SDG/ha) by sorghum price (SDG/kg).

Table 1. Average values of working parameters for the used machines for two seasons

Table 2. Rainfall data at the experimental sites for seasons 2012 and 2013

The results showed that soil moisture content is slightly higher at early season (the first month after sowing) in CF than CA in both seasons (Fig.1). This was due to the effect of tillage operation in CF which makes soil fluffy and absorbs more rainwater. Whereas in mid season (early September) and late season (mid of October) no clear priority between CA and CF, this may due to the inherent characteristics of the soil, the phenomenon of swelling when wet and shrinking when dry. Generally, soil moisture content in both systems followed the rainfall trend.

Fig. 1. Average soil moisture content% at 0 to 20 cm during two seasons in CA and CF

Visual assessment of sorghum fields at the early stage showed that CA was free of weeds with good crop establishment compared to CF (Fig.2). This was due to the use of optimum pant density and fertilizer along with herbicides. The average plant densities of sorghum in CA and CF for the first season was 7 and 6 plants/m2, respectively; while in the second season it was 9 and 7plants/m2for the treatments, respectively. These plant densities were lower than the seeded and the recommended (14 plant/m2) as mentioned by Anonymous (2002); this result needs to be considered in further studies. However, CA and CF obtained similar plant height in the first season which was about 126cm; whereas in the second season CA obtained taller plants (135 cm) compared to CF (105 cm).

The highest yield (1961kg/ha) was obtained by Wad Ahmed cultivar in the first season, and Arfa Gadamk cultivar (1579.2 kg/ha) in the second season (Table 3). Yield variability in CA may due to the interacting effects of crop requirements, soil characteristics and climate (Giller et al, 2009). The lowest yield was obtained by CF (432.3 kg/ha) and (361.5 kg/ha) for the two seasons, respectively. Irrespective of sorghum cultivar and rain, CA significantly out yielded CF by four folds indicating its superiority. This is due to the use of good cultural practices and inputs. However, the use of untilled seedbed, row planting and 95.2 kg urea/ha can improve sorghum yield (Yousif and Taha, 2013). 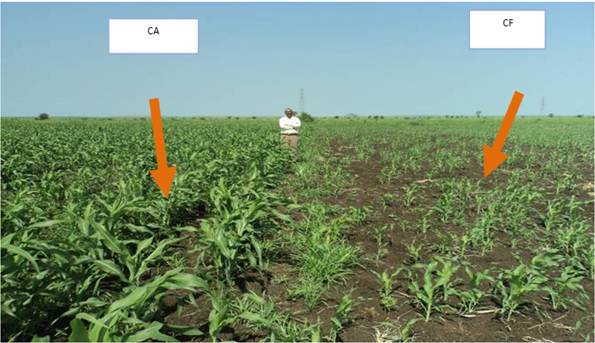 Fig. 2. Performance of sorghum crop under CA and CF in rainfed areas, season 2013.

Producing sorghum by CA gave the highest cost; gross return and net return for all genotypes throughout the seasons compared to CF (Table 4). Similar results were reported by Ismail et al, (2012). The marginal rate of return (MRR) of CA was 330% and 154% for the first and second season, respectively (Table 5). This indicates that for every one SDG invested in producing sorghum by CA will return back about 2.4 SDG on the average.

This result indicated that producing sorghum under CA was profitable compared to CF. The higher yield and net return obtained from CA makes it as an attractive option for farmers. The BEP was 1000 and 1410kg/ha for CA and 500 and 432 Kg/ha for CF in the first and second seasons, respectively. This also confirms the superiority of CA over CF when comparing the obtained average yields (Table 3) to the values of BEP. The sensitivity analysis revealed that CA is profitable as shown by the MRR of 146% and 76.4 % over CF for the two seasons, respectively (Table 5). This indicated that using CA is stable regarding yield and cost fluctuations (Coutts and Smith, 1991 and Lange, 2005).

CA saved 25% of fuel and 26% of time required to establish sorghum crop and significantly out yielded CF by four folds. Economic and sensitivity analyses proved the profitability of CA. The breakeven point was 964 kg/ha for CA and 375 kg/ha for CF. As aconsequence of these results, in season 2014 the Federal Ministry of Agriculture applied CA in 200 ha in Gedarif State. Moreover, the European Union (EU) applied CA Southern Gedarif State in about 900 ha under the project named: Sudan Food Security Program (SFSP)-Rural Smallholders Component which is implemented by NGO in collaboration with State Ministry of Agriculture involving the private sector in the delivery of the CA package. However, the effect of continuous use of CA on environment, soil and natural resources require further investigations.

This study was carried out under a project funded by Islamic Development Bank (ISDB), through Arab Center for the Studies of Arid Zones and Dry Lands (ACSAD) and the Federal Ministry of Agriculture and Irrigation that is called: "Disseminating and applying the concept of CA in Sudan