Poverty remains among the most important human rights challenges facing the world community. Based on equal worth and dignity of every individual, human rights are central to well-being. Freedom from want and fear constitutes the fundamental condition to enjoy that well-being, while freedom from discrimination forms the basis for social protection and effective participation in society" (UNICEF, 2000). Poverty is a multi-dimension concept. Experts and academics have suggested many definitions over time. For example, poverty could be the lack of command over commodities in general; alternatively, it could be the lack of command over some basic goods (e.g., food and housing). More generally, poverty is the lack of capability to function in a given society. All these definitions point to poverty as a status in which a reasonable standard of living is not achieved. (FAO, 2005, WB, 2005).

Haughton and Khandker (2009) argued that poverty is deprivation in wellbeing. But the questions arises what is wellbeing and how we measure deprivation.  One approach is to think of well-being as the command over commodities in general, so people are better off if they have enough resources to meet their needs. A second approach to wellbeing is to ask whether people are able to obtain a specific type of consumption good: Do they have enough food? Or shelter? Or health care? Or education? Perhaps the broadest approach to wellbeing is the one expressed by Sen1987, who claims that wellbeing comes from a capability to function in society. Thus, poverty arises when people lack key competences; such have insufficient income or education, or weak health, or insecurity, or low self-confidence, or a sense of powerlessness, or the absence of rights such as freedom of speech.

Three out of every four poor people in developing countries live in rural areas, and most of them depend directly or indirectly on agriculture for their livelihoods. Climate change and rising food prices are reminders of the need to focus on food security and agriculture for development. Agriculture is central to the livelihoods of the rural poor. Agriculture can be an engine of growth and is necessary for reducing poverty and food insecurity, particularly in sub-Saharan Africa. Advances in agricultural knowledge and technology that accompany the changes in the sector are creating an array of new choices for producers, altering what is produced, where it is produced, and how it is produced. Factors outside of the sector, such as widespread environmental change, are also altering agricultural potential throughout the world. Migration, arising mainly from poverty or prompted by natural disasters or violent conflicts form a dynamic force, changing the landscape of the rural population. Globalization and trade liberalization have opened more market opportunities internationally and have induced greater innovations and efficiencies in many cases. But, at the same time, globalization has led to painful transition periods for some economies and has favored the producers who have more resources and the information, education, and capacity to cope with increasingly stringent market demands (WB, 2009).

Sudan is a low-income country, with average GNI per capita USD 1450 (WB, 2012). With its vast geographic area and varied natural resources, it holds great economic potential. So far, it has been a land of missed opportunities. It is also a land of great diversity: ethnically, geographically and ecologically. The country faces the challenges of utilizing, capitalizing on such diversity to achieve development and eradicate poverty. The relatively low level of per capita income masks wide regional disparities in economic and social development. Educational levels are low, health conditions are poor, and the burden of disease is heavy and widespread. Infrastructure is either non-existent or underdeveloped and inadequate in lager parts of the country, (UNDP, 2006).

IFAD (2007) stated that about 19 million people in Sudan, 85 per cent of the rural population, are estimated to be living in extreme poverty. Most of them struggle to feed themselves and their families and have little or no access to safe drinking water and health services. The incidence of poverty varies considerably according to region. Severe inequalities in terms of access to education, sanitation and clean water, infrastructure and natural resources, income opportunities, justice and political protection exist between regions.

1.2. The Objective of the Study

1.  Identifying and describing poverty situation in the area.

2.  Identify and analyze the causes of poverty.

1.3. Hypotheses of the Study

1.  The majority of people in the study were poor.

2.  Rain variability was the main cause of poverty in the area.

Both primary and secondary data were used in this study. The filed survey was conducted on June 2013. The field data was collected through questionnaires, group discussion, interviews and observation. Hundred household heads were chosen through simplified random sampling.

The main analysis technique for the study was Foster, Greer, and Thorbecke index (FGT index) which include incidence of poverty; poverty gap; and severity of poverty. Poverty indicators for consumption were calculated using (1 $) (6 SDG) as poverty line. Descriptive statistics, Lorenz Curve, and Gini Coefficient were also used in data analysis.

World Bank (2003) stated that Poverty Headcount (Incidence of poverty) is the share of the population that is poor, that is, the proportion of the population for which consumption or income y is less than the poverty line. Suppose we have a population of size n in which q people are poor.

P0 = the head count index; q = the number of households under poverty line; n = the total number of population or sample size.

Taha (2007) stated that Sudan has suffered a number of long and devastating droughts in the past decades. All regions have been affected, but the worst impacts have been felt in the central and northern states, particularly in North Kordofan, Northern state, Northern Darfur, Western Darfur, Red Sea and White Nile states. As a result, their population is highly vulnerable to effects of chronic and occasionally acute food shortages. 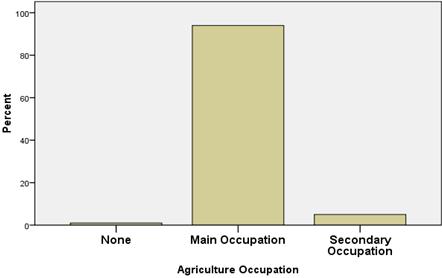 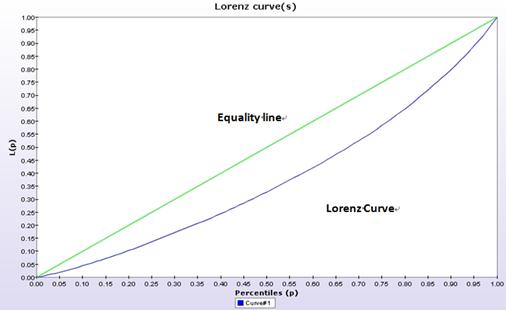 High poverty rates exited in the area as result of many interrelated natural and social factors.  When participants in group discussion were asked to name causes of poverty in the area, they mentioned many factors. Rain variability was the main cause of livelihood vulnerability. Agricultural pest and diseases, traditional farming methods, marketing problems, low income, low capabilities, lack of finance, shortages of formal jobs, low level of social services (education, health, water) are considered some of the factors that lead to poverty beside many other social factors.

Ajakaiye and Adeyeye (2002) stated that there is no one cause or determinant of poverty. On the contrary, combinations of several complex factors contribute to poverty. These include low or negative economic growth, inappropriate macroeconomic policies, deficiencies in the labor markets resulting in limited job growth, low productivity and low wages in the informal sector, and a lag in human resource development. Other factors which have contributed to a decline in living standards are structural causes or determinants of poverty include increase in crime and violence, environmental degradation, public retrenchment, a fall in the real value of safety nets, and changes in family structures. All or some of these factors came up in group discussions in the study area.