Influence of Compost with Reduced Level of Chemical Fertilizers on the Accumulation of Dry Matter in Leaves of Radish (Raphanus sativus L.)

Crop growth relies on photosynthesis and the growth rate directly reveal photosynthetic rate (Evans, 2013) which is usually proportional to crop yield. An increase in leaf area increases distribution of assimilates to the reproductive part of a crop due to increasing in total photosynthesis (Richards, 2000). There is a positive association between photosynthetic rate and chlorophyll content (Nagarajet al., 2002). Thus, the leaf production is the key point on the effect of dry matter accumulation to tuberous root in later stage of the crop production. In conventional agriculture, chemical fertilizers are applied to increase leaf related parameter but it causes the negative effect on soil environment and human health. Ayoola and Adeniyan (2006) reported that the application of inorganic fertilizers is often linked with nutrient imbalance, leaching and pollution of groundwater under intensive agriculture and it may lead to reduce crop yield. Therefore, to control these effects in nature, an alternative method is application of organic manure to the soil which has positive effects on crop yield and soil fertility by improving water holding capacity, nutrient contents and microbial activity (Griffin and Porter, 2004; Elisabetta and Nicola, 2009; Moller, 2009; Piraveena and Seran, 2010). Due to these benefits of compost, this study was designed to study the effect of the compost with the reduced level of chemical fertilizers on the leaf production for the dry matter portioning to the radish crop.

This study was carried out to determine the effect of compost with reduced chemical fertilizers on leaf growth of radish (Raphanus sativus L.). The field study was conducted in the year 2014 during March to May at Crop farm, Eastern University, Sri Lanka. The monthly rainfall ranges from 22.2 mm to 174.2 mm and the temperature ranges from 30.6ºC to 32.5º C. Average humidity is 75%. The variety ‘Beeralurabu’ (long radish) was planted at a spacing of 30 cm x 10 cm and the experiment had eight treatments, each replicated three times. Subsequently the experiment contained 24 plots of 1.2 m × 0.8 m. Plots were separated from each other with the spacing of 0.5 m and 1 m alley was provided between blocks. In experimental design, treatments included no fertilizer application (T1), recommended chemical fertilizers alone (T2), 20 t/ha compost alone at basal (T3) or with chemical fertilizers at top dressing (T4), 10 t/ha or 20 t/ha compost with half dosage of chemical fertilizers at basal only (T5, T7) or in combination with chemical fertilizers at topdressing (T6, T8). Chemical fertilizers were applied as recommended by the Department of Agriculture, Sri Lanka. At harvest, canopy height, number of leaves, leaf area and fresh weight of leaves and dry weight of leaves were recorded and leaf production was calculated. All the data were subjected to analysis of variance (ANOVA) using SAS statistical analysis package and the treatment means were compared in Tukey’s test. Regression and correlations between some parameters were also analyzed.

Table 1. The canopy height, number of leaves and leaf area of radish plant in each treatment.

F test: *P<0.05; **: P<0.01. Means followed by the same letter in each column are not significantly different according to Tukey’s test at 5% significant level.

The number of leaves was remarkably differed (P<0.05) due to different levels of compost combined with chemical fertilizer application (Table 1). There was a same phenomenon mentioned in canopy height could be observed in T8. Among the treatments, T8 had highest mean value (13.26) for number of leaves per plant, followed by T6 (13.00) and T7 (12.46).  T1 had lowest mean value (11.06) and it was significantly varied from T4, T6, T7 and T8. The increase in number of leaves may be due to the macro and micronutrient availability in compost. Thanunathan et al. (1997) reported that application of vermicompost exhibits to be effective in onion.

Treatment T1 showed remarkable difference (P<0.05) in leaf area compared with T4, T6, T7 and T8 (Table 1). But treatment T8 (639.10 cm2) only showed significant difference (P<0.05) from both controls for leaf area. Highest mean value for leaf area was observed in T8 (639.10 cm2) followed by T6 (587.20 cm2) and T4 (506.00 cm2) and theses three treatments were statistically non-significant to each other. It is due to the application of compost combined with chemical fertilizers which help to provide require amount of nutrients for flourishing the leaf growth. Application of poultry manure with vermicompost increases the leaf area more than chemical application in okra and radish (Prabuet al., 2003; Dhananjaya, 2007). There were positive correlations between leaf area and tuber diameter as well as leaf area and root length (Table 2 and Figure 1).

Table 2. Correlation between leaf area and tuber diameter of radish in some selected treatments.

There was a highly significant difference (P<0.01) in fresh weight of leaves of radish (Table 3). The fresh weight of leaves, T1 (19.54 g) was significantly different from T2 (30.75 g) and T3 (32.27 g). However T4 (40.88 g) showed remarkable variation with above mentioned three treatments but it did not differ from other treatments (T5-T8). Among the treatments, T8 had highest fresh weight (45.54 g) of leaves per plant which was statistically (P<0.05) higher than that of all other treatments, except T6 (41.24 g) and T4 (40.88 g) those were non-significant to each other and the lowest mean value was recorded in T1 (control 1). The results revealed that the application of compost at the rate of 20 t/ha with half dosage of chemical fertilizer as basal may provide ample amount of nutrients for growth and development of radish. Sendur et al. (1998) and Muneshwar et al. (2001) stated that organic fertilizer application increases the fresh and dry weights of leaves more than chemical fertilizer application.

Figure 1. Regression analysis to fit the link of variables between leaf area and total tuber length of radish in some selected treatments.

Table 3. The fresh and dry weights of leaves and also leaf production of radish in each treatment.

F test: **: P<0.01. Means followed by the same letter in each column are not significantly different according to Tukey’s test at 5% significant level.

There was a remarkable difference in dry weight of leaves (Table 3). Highest mean value (4.79 g) for dry weight of leaves was recorded in T8 and followed by T4. Treatments T4 (4.71 g), T6 (4.57 g) and T8 (4.79 g) showed significant difference from all other treatments. T6 and T7 were not statistically different from each other. Treatment T2 (3.12 g) had lower mean value together with T1 (1.80 g). This was reported in previous experiments. Japanese white radish variety having same characters to ‘Beeralurabu’ had high dry weights of plant parts with organic fertilizer applications (Pujariet al., 1977). Dananjaya (2007) stated that 50% poultry manure and 50% vermicompost gave significantly higher values of fresh and dry weights of leaves and also root length in radish followed by chemical application. Further, it was noted in the present study that specific leaf area was lower in T4 than other treatments while higher value was recorded in T1 (Figure 2).

It is the important parameter for the dry matter translocation which occurs into the tuberous root in later stage of crop production. Table 3 shows there was a significant difference (P<0.05) in leaf production between T2 (10.24 t/ha) and T4 (13.61 t/ha) but in T4, T6 and T8 there were not significantly different. Application of recommended chemical fertilizer alone produced lower levels of leaves than that of integrated use of fertilizers (T4, T6 and T8). Therefore, optimal amount of photosynthate could be translocated to tubers in later stage in combined use of compost and chemical fertilizers than chemical fertilizer alone (T2). 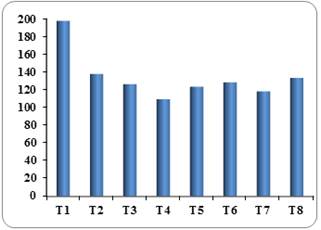 Figure 2. Specific leaf area (cm2/g) of radish in each treatment.