The study was conducted to investigate the effect of salinity levels on seed germination and seedling characteristics of sorghum (Sorghm bicolor L.) cultivars. A laboratory experiment was conducted using new sorghum phenotype Barbarei (Abu-ragaba and Abu-kungara) cultivars in comparison with other two locally improved varieties (Tabat and Wad-Ahmad). Fifty seeds of each of the cultivars were germinated in Petri dishes containing filter paper of 9 cm diameter. Treatments comprised of control (distilled water), 0.5%, 1.0% and 1.5% Sodium Chloride (NaCl) were laid in a factorial experiment in completely randomized design (CRD) with 4 replications. Data recorded was subjected to analysis of variance (ANOVA). Least Significant Differences (LSD) method was used to test the differences between treatment means at 5% and 1% probability level. Number of germinated seeds was significantly affected by salinity level, especially by the higher salt concentrations compared to the control. Germination percentage and seedling vigor index (SVI) were decreased with increasing salinity level. The differences between treatments were highly significant (p ≤ 0.01). The highest seed germination percentage (97.5%) and seedling vigor index (3.79) were found with the control (0% NaCl) and the lowest values were found with 1.5% concentration. Plumule length and radical length decreased significantly as concentration of NaCl increased. Results indicated that cultivar had a highly significant effect (p ≤ 0.01) on the parameters measured. Results indicated that Barbarei cultivars were found to be sensitive to salinity when compared to Tabat and Wad-Ahmed, Tabat seems to be more salt tolerant cultivar. The interaction of salinity level × cultivar exerted significant effect (p ≤ 0.05) on pumule length, radical length and final germination percentage.

Sorghum is a widely grown cereal crop, particularly in Africa, sorghum ranks 5th in global cereal production. Grain sorghum is a dominant summer crop in Sudan; many varieties are grown under rain-fed areas and under irrigation in some central states. Unique Phenotype (or may be unique genotype) of sorghum bicolor species locally named (Barbarei) is widely grown in South and West Darfur States and it plays an important economic and nutritious role but no studies were done about it so far. This species includes wide diversity of phenotypes (Abu- ragaba and Abu- kungara) both with different seeds color. The Barbarei phenotypes seems to have different behavior compared to other cultivated species or varieties of sorghum in Darfur, where the plants produces flowers and grain only when weather gets cooler (October-November), although the plant heads continue to form normally (Bahar et al., 2013). In nature plants are subjected to multifarious harmful environmental stresses through their life cycle (such as salinity, alkalinity and drought) which reduce plant productivity. Salinity is one of the major environmental problems facing global agriculture, leading to crop damage and affects crop production in arid and semi-arid lands, where evaporation is high and the rain is not enough to leach the salt out of the root zone (Al-Hilal, 1999; Ghazizade et al., 2012). In arid and semi-arid regions many physiological and metabolically changes are induced in plants affecting their growth, development, seed germination and early seedling growth (Saroj and Soumana, 2014). Seed germination and early seedling growth are important stage for the establishment of plants population. Increasing salinity levels significantly decreased germination parameters, shoot and root length, shoot and root fresh and dry weights of some forage sorghum cultivars (Kandil et al., 2012). Tabatabaei and Angholi (2012) reported that increasing in saline treatments more than 10dsm-1 was consisted with considerable reduction of the rate of germination, furthermore, as the salinity increased the shoot and root length of some forage sorghum genotypes decreased. El Naim et al., (2012), reported that   the high levels (4, 8 and 16 dsm-1) inhibited the seed germination significantly. The strongest inhibition of germination occurred at the higher salt concentrations. Growth of young seedlings was also reduced, especially at the higher salt concentrations. Results obtained by Behzadnejad and Tohidinejad (2014) revealed that salinity caused a significant decreased in germination characteristics and seedling growth of sorghum. Increasing in salinity concentration led to a significant decrease in the germination percentage, germination rate and mean germination time and seedling dry weight. Similar results were reported by Dadar et al., (2014) that with increasing salinity level the germination percentage, rate of germination, radical and pumule length and pumule weight of sorghum decreased. As reported by Geressu and Gezaghegne (2008) germination rate and seedling root length of sorghum were more salt affected than the final germination percentage and seedling shoot length. Some sorghum accessions were found to be salt tolerant during germination and seedling growth. However, others were salt sensitive during germination but later became salt tolerant at seedling growth. Results attained the presence of broad intra-specific genetic variation among sorghum accessions for salt tolerance. Results recorded by Tigabu et al., (2012) indicated that all parameters measured showed to have inverse relationship with increase in salinity levels. The study affirmed presence of wide genotypic variation among the sorghum genotypes for NaCl salt tolerance. Results of the study conducted by Almodares et al., (2007) showed that in all sorghum cultivars as the salt concentration increased, seed germination and seedling fresh weight decreased significantly. Salt stress adversely affects plants and crops at all stages of their life cycle as reported by many researchers (Radhouane, 2013; Yakubu et al., 2010, Saddam et al., 2013 and Francois et al., 1984). The objective of this study was to investigate seed germination and seedling growth characteristics of sorghum cultivars as affected by different salinity levels.

A laboratory experiment was conducted in 2014 in Biology laboratory, Faculty of Education, University of Zalingei, Sudan. The aim of the experiment was to evaluate germination and seedling characteristics of sorghum Barbarei phenotypes (Abu-ragaba and Abu-kungara) in comparison with other two locally improved varieties (Tabat and Wad-Ahmad) under different salinity levels. Pre-treatment germination test was done for the seeds of different cultivars using Petri dishes containing a 9 cm diameter filter paper. Fifteen seeds were placed in every Petri dish after adding 5 ml of distilled water. Germination percentage (GP) was calculated according to the International Seed Testing Association (ISTA).

The treatments comprised of control (distilled water), 0.5%, 1.0% and 1.5% of sodium chloride (NaCl). The treatment solutions were prepared by solving NaCl in distilled water, each experimental unit included a Petri dish contains filter paper of 9 cm diameter with 50 seeds of each cultivar. Treatments were arranged in a factorial experiment in completely randomized design (CRD) with 4 replications. 5 ml solution of each concentration was applied to each Petri dish. The control plates received the same volume of distilled water devoid of any salt. All Petri dishes were kept at room temperature, counting of germinated seeds started from the next day of placing seeds. The seeds were considered germinated when radicals appeared and are visible enough to be counted. Germination count was made through the experimental period until all the seeds were either germinated and/or dead.

The analysis of variance (ANOVA) was carried out for the results and the treatment means were separated using the Least Significant Differences (LSD) at 5% and 1% probability level according to the procedure described by Gomez and Gomez (1984).

3.1. Effect of Salinity on Seed Germination and Seedling Characteristics

Table 1. Result of variance analysis of the number of germinated seeds under salinity levels

Table 2. Result of variance analysis of the number of germination percentage at different count

Results of statistical analysis for number of germinated seeds and germination percentage at different counting days have been shown in tables (1 and 2). Analysis of variance revealed that salinity level made a significant difference on most of the considered characteristics.

Table 3. Effect of salinity levels on germination and seedling characteristics 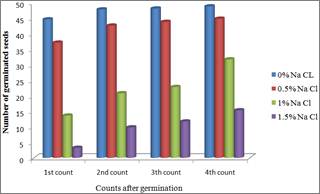 Fig. 1. Effect of salinity on number of germinated seeds 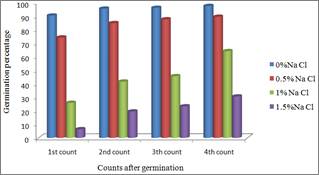 3.2. Effect of Cultivar on Seed Germination and Seedling Characteristics under Salinity Levels

Figs.3 and 4 showed the effect of cultivar on number of germinated seeds and germination percentage under different salinity levels during counting time. Results indicated that cultivar had highly significant effect (p ≤ 0.01) on the parameters measured. Wad-Ahmed and Tabat recorded the higher number of germinated seeds and germination percentage during the counting period compared with Barbarei cultivars ( Abu-ragaba & Abu-kungara). Within Barbari cultivars Abu-kungara exerted higher number of germinated seeds and germination percentage. Results in Table (4) showed that cultivar significantly (p ≤ 0.01) affected the radical length and the final germination percentage, whereas; the differences were not significant for plumule length and seedling vigor index. These results indicated that Barbarei cultivars were found to be sensitive to salinity compared to the locally improved cultivars (Tabat and Wad-Ahmed). Tabat seems to be more salt tolerant cultivar. These results were similar to findings obtained by El Naim et al., (2012) that Wad-Ahmed cultivar was found to be salt tolerant during seedling biomass production compared with other cultivars studied, and they revealed a broad intra specific variation in sorghum varieties for salt stress with respect to their early biomass production.( Almodares and Dosti, 2007; Almodares et al., 2013; Tabtabaei and Angholi, 2012 and Tigabu et al., 2012 ) observed remarkable difference among some sorghum cultivars. Asfaw (2011) affirmed the presence of broad intra-specific genetic variation in sorghum accessions for salt stress. 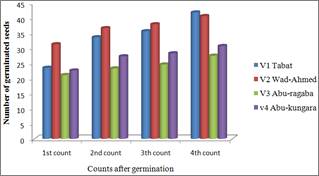 Fig. 3. Effect of cultivar on number of germinated seeds 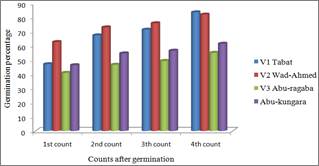 The interaction of salinity level × cultivar exerted significant effect (p ≤ 0.05) on plumule length, radical length and final germination percentage, as showed in (Tables 5, 6 and 7). The shortest plumule length was produced by Wad-Ahmed and Tabat cultivars under higher salinity level (1.5% NaCl). Radical length followed the same trend of the plumule length, whereas the lower germination percentage were obtained with Barbarei cultivars (Abu-kungara and Abu-ragaba) respectively. This might be due to genetic variation of the sorghum cultivar to salt tolerance. Kandil et al., (2012) reported that results clearly showed that germination index, seedling vigor index, shoot and root lengths, shoot and root fresh and dry weights, seedling height reduction and relative dry weight significantly affected by the interaction between forage sorghum cultivars and salinity concentrations.

Table 4. Effect of cultivar on germination and seedling characteristics under different salinity levels

Table 7. Effect of interaction of salinity × cultivar on germination percentage