The Effect of Local Available Materials on the Properties of Concrete

Concrete structure is the most common type of structure, and it keeps developing and improving day after day to meet up with the global and environmental requirements, this structure is basically a mixture of cement, water, sand, and coarse aggregate. However, cement considered as the most expensive and significant ingredient in concrete production. Concrete is the major structural material widely consumed in the world, after water. Most of the infrastructure and building construction in Libya are using concrete as construction material. Concrete is major construction material.

Admixtures are used to: alter the fluidity (plasticity) of the cement paste; increase (accelerate) or decrease (retard) the setting time; increase strength (compression); or to extend the life of a structure. Tremendous types of admixture has been introduced till now, each one of them encounter to the concrete mix with different advantages and properties, such as air entraining ,and others, but lately a new admixtures has been introduced to the concrete industry, these admixtures called Pozzolan materials (1).

Concrete has growing popularity in Libya and most of the cement used in Libya is Portland cement (2). The term "Portland cement" pertains to a calcium silicate hydraulic cement produced by heating materials containing calcium. However, Pozzolanic admixtures are natural pozzolanic materials or industrial by products that are used in concrete. Therefore, concrete less expensive, more environmental friendly and less energy intensive.

The used of solid waste materials has been used to produced concrete and is widely used in the world. Despite the positive successes reported from field and laboratory-based studies, this concrete has not been widely applied in practice in LIBYA and, sometimes, its use has been discouraged by some professionals. The overriding obstacle preventing the use of waste materials in Libya lies in the absence of a locally accepted design technique that accounts for the variables believed to contribute to its performance. So, in order to effectively use waste materials in Libya, there is a need to accurately predict its compressive strength, which is used as an essential parameter in structural design. Therefore, the objectives of this investigation are: 1) to explore the possibilities of producing concrete with (FMACAP) locally available materials in Libya; and 2) to determine how FMACAP influence the workability and compressive strengths of concrete as well as the optimum percentages of those material. Ultimately, the project aims to provide some guidelines for concrete mix composition that can be used in the Libyan construction industry. Fortunately, most of mineral admixtures are industrial byproducts, so their utilization not only produces economically and technically very superior concrete but also prevents environmental contamination by means of proper waste disposal.

Mineral admixtures are finely divided materials, which are added to concrete by large amount to replace part of the Portland cement. The combination of both pozzolanic and pozzolanic/cementitious materials with Portland cement has been used widely. However, It is important to do a research and development on concrete admixtures. This is because with the waste materials is used in the construction project. Than concrete will produce a higher strength at future studies, increase the workability and so on. So from waste material can be reused. Thus, cost of construction materials will be reduced. Therefore, in general this research is very important in order to know whether the FMACAP concrete with chemical admixture added will produce a good performance concrete

In this research, ordinary Portland cement type I, was used. The Fine Material Associated with Coarse Aggregate Production (FMACAP) with fineness namely (75 mic). Aggregate was obtained locally from the Libyan crashed stone. Sea sand was used as a fine aggregate. Coarse aggregate used in this study had a 10-mm nominal size. Water needed for the mix was adjusted based on the absorption of aggregate. In order to achieve an acceptable workability, a 1.6% of Sika ViscoCrete®-5400 super-plasticizer, was used in concrete mixes.

Test matrix of mixes is summarized in Table (1). Many trial batches were performed in the laboratory and several adjustments were carried out in order to identify the optimum proportions. The concrete ingredients selected for use in this study are representative of materials typically used in Libya. The concrete mix composition used for laboratory testing is also close to Libyan standards. The w/cm ratio 0.60 was used. FMACAP added ranged from 0 to 15%.

2.3. Preparation and Casting of Test Specimens

All experiments were conducted in the concrete laboratory under a controlled environment and were properly monitored. Specimens used were standard cubs of 150 x 150 x 150 mm. Concrete mixes were made in a power-driven 50-liter revolving type drum mixer. The coarse aggregate, fine aggregate and water were divided into thirds and added to the mix in sequence. Super plasticizer was added to the initial mixing water. The concrete was mixed for about 5 minutes. During mixing, water was added to the mix incrementally to attain the consistency and slump required. The time, sequence and method of adding the aggregates, superplasticizer and FMACAP for each batch remained unchanged and simulated good field practice. After mixing, a portion of the fresh concrete was placed aside for plastic properties determination. Slump and flow tests of fresh concrete were measured. Specimens were kept for 24 hours in molds at a temperature of about 23º C in the casting room then cured in the water tank for the specified time at approximately 23º ± 2º C.

3.1. Effect of FMACAP Concrete on Slump

The results for slump loss of FMACAP concrete are shown in Table 2. The data are recorded and being shown to observe the relation between percentages of FMACAP and slump loss. The value of slump loss for different percentages of FMACAP is then plotted as a graph as shown in Figure 1. Graph show slump against elapse of time for different percentages of FMACAP. From the graph, it is clear that slump reduces with time. It is acceptable since continuous hydration process will produce calcium silicate hydrate to fill the pores between the cement particles and aggregate. As a result, setting of the concrete will reduce the fluidity of concrete, hence, reduce the slump too.

Figure 1. Effect of FMACAP Percentage on Workability on Slump Loss.

Table 2. Effect of FMACAP on the Slump Loss.

When observation is done on the content of FMACAP, increase in percentage of the FMACAP will decelerate the rate of setting of concrete, since FMACAP will help to retain the concrete in liquid state for a longer time, and hence, reduce the slump loss during the transportation of concrete to the site. However, over percentage of FMACAP will lead to high slump loss, which will not give true slump that as what we expect and desire.

The results for flow table of FMACAP concrete are shown in Table 3. The data are recorded and being shown in the manner of increasing percentage of FMACAP. The value of flow table for different percentage of FMACAP is then plotted as a graph as shown in Figure 2. Flow table is used to check the workability and cohesiveness of the concrete. From the graph obtained, diameter of spread of concrete reduces with time. It is acceptable and understandable since concrete will set as hydration process proceeds between the cement particles and water. Solidification of concrete will then reduce the workability and hence, present small diameter of spread of concrete. When FMACAP is added to the concrete, the diameter of spread concrete increases due to higher amount of water is provided for lubricating the mix.

Table 3. Effect of FMACAP on Flow Table Test of Concrete. 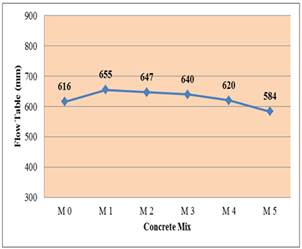 Figure 2. Effect of FMACAP Percentage on Workability on Flow Table.

Even though FMACAP increase the diameter of spread of concrete, however, their mechanisms are totally different. For FMACAP, it significantly increases the workability of concrete for the first two hours due to deflocculating and adsorption of highly negative charges on cement particles, then, its effect fades out when the concrete start to set after 2 hours from casting, which will provide sufficient time to place and compact the concrete.

Before adding the FMACAP, the concrete is less cohesive since they present small diameter of spread concrete. Concrete can only be considered as uniform and cohesive when they possess the diameter in the range between 500 – 650 mm. After adding the FMACAP, this desired diameter is achieved. Hence, we can conclude that FMACAP concrete is cohesive. In term of percentage, an increase in percentage of the FMACAP will help to increase the workability of concrete. However, FMACAP increases the diameter significantly for concrete. 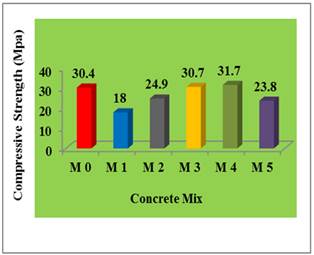 Based on the findings of this study, the following conclusions are made:

• Addition of FMACAP to concrete can be conveniently achieved with the present day technology. This study has shown that it is possible to produce concrete in Libya using the locally available materials.

• Test results indicate that the concrete, made with FMACAP tends to gain strength more than conventional concrete. The presence of FMACAP increases the strength of concrete.

• A finer and wider range of FMACAP percentages should be tested to pinpoint the optimum amount of FMACAP additive.

• Other additives should be tested with the use of Libyan local materials to determine their influence on concrete.

• Further tests with longer curing ages such as 90, 180 and 360 days should be investigated.

• Real data should be generated from the analysis of commercial concrete mixes obtained from ready mix plants in Libya, which aids in calibrating the lab results.

• Additional work is needed to incorporate the outcome of this study with the expressed goal of updating current Libyan concrete code.

• Highly recommendation that further investigations should be carried out to understand more about the properties of concrete contains FMACAP.

• Environmentally using of FMACAP in the concrete mix for construction is doing the environment a good deal in utilizing waste.