3Genetics and Breeding of Fruits and Vegetables, Montfavetcedex, France

Most species in the genus Cucumis are monoecious although some are dioecious[1]. In melon (Cucumismelo L.), 60 to 70% cultivated melons are and romonoecious but wild melons are monoecious. Monoecism is found mainly in the flexuosus, acidulus, chate and momordica groups. And romonoecism is controlled by a single recessive gene [2], which was first named monoecious gene (symbol M) and now is and romonoecious gene (symbol a). Another phenotype, hermaphroditism, has been found in very few accessions. Poole and Grimball [3] studied the genetic control of sex expression in melons and they concluded that there is a recessive gene named gynoecious (symbol g), independent from gene a and the interaction between the two loci is as follows: A Gmonoecious, Aggynoecious, a Gandro monoecious and ag hermaphrodite. In tibish melon two linked genes (A-2 and A-3) were involved in the loci of and romonoecya/A[4]. Production hermaphroditic plants are necessary to use plants of sex types that enable self-pollination. However, many dicotyledonous plants, and in particular Cucurbitaceae, may be monoecious, and romonoecious, gynoecious or hermaphroditic. In cucumber, gynoecious plants were used for hybrid production and the fruits developed without fertilization in term of parth enocarpy, but this phenomenon not reported in melon. The implementation means for producing hermaphroditic is possible by conducting chemical treatments to plants, so plants get the ability for self-pollination. In melon, for example, spraying of ethylene inhibitors such as silver nitrate or silver thiosulfate enhances stamens in female flowers [5], [6]. In melons female or perfect flowers are appeared at the first and second nodes of the lateral branches in one-flowered sometimes two-flowered inflorescences in monoecious or and romonoecious plants, then male inflorescences appeared in the following nodes of the lateral branches and in the main stem in multi-flowered inflorescences, but in hermaphrodite plant flowers appeared in main stem and lateral branches in one-flowered. Breeding hermaphrodite cultivars, with perfect flowers at each node on the main stem and the lateral branches, belonging to cultivate groups of melon where fruits are harvested before maturity, as in flexuosus or tibish groups, could be a possibility to increase earliness and yield. Accordingly, the aims of this study are to study the possibility of transferring hermaphroditic character into snake melon and tibish and its effects in earliness and yield production.

Four genotypes were used in this study; three monoecious cultivars belonging to the flexuosus group, namely, Alimin from Sudan, PI222187 from Afghanistan and Snakemelon from Saudi Arabia and the fourth was the hermaphroditic melon accession Paul from Far-East supplied by B. Kubicki. The F1 and F2 progenies between the three monoecious accessions and Paul were produced by hand pollination. The evaluation of 100 plants of each F2 progeny was conducted on young plants in pots (9 cm in diameter). The hermaphroditic plants were selected, transplanted in the greenhouse and selfed and crossed to their flexuosus parents to produce F3 and BC F2 progenies. Twenty three F3 lines of the cross Alimin´ Paul, seven F3 lines of the cross PI222187 ´ Paul and thirteen F3 lines of the cross Snakemelon ´ Paul were grown under field conditions at the University of Gezira farm (Sudan) during the winter season of 2006/2007. The plants were evaluated for sex type; the longest ovary plants of F3 were selfed to produce F4.

Bc F2 plants of each cross evaluated for sex type, then hermaphrodite plants selfed four times under field condition of Sudan and greenhouse condition of INRA during seasons 2006/07 and 2007/08 successively.

F4 plants evaluated for sex type under greenhouse condition of INRA season 2007, hermaphroditic plants crossed to their parents to produce Bc F4 progenies.

Bc F4 plants of each cross evaluated for sex type, then hermaphrodite plants selfed twice under field and greenhouse conditions of Sudan and France during 2007/08 successively.

The following BC progenies were evaluated on the bases of agronomic characteristics:

These genotypes were tested for agronomic traits, in comparison with their flexuosus parents (Snakemelon, PI 222187, Alimin) and the popular cultivar of snake melon ‘Silka’ in Sudan, in RCBD (Randomized Complete Block Design) with 3 replications.

The parameters collected were:

The F1 of each cross were evaluated in Sudan 2007/2008 under field conditions and selfed to produce F2.

Thirty plants of each F2 progeny were grown in pots under greenhouse conditions at INRA, France in 2008, then evaluated for sex types. The segregated hermaphroditic plants were selected, selfed and crossed with their parent to produce F3 and BC F2 progenies. Then, F3 and BC F2 plants seeds of each progeny were grown under field conditions of Sudan and the plants were evaluated for sex type.

The lines were planted in the experiment with their tibish cultivars parents in RCBD (Randomized Complete Block Design) with 3 replications.

Segregation ratios in F2 populations were tested for goodness of fit to theoretical ratio with Chi square test, analysis of variance for RCBD was used to analyse the data according to Steele and Torrie[17].

F1plants of crosses between monoecious lines and hermaphroditic Paul were clearly monoecious, indicating that monoecy was dominant in these accessions. In the F2 generation, the segregation ratio of 9: 3: 3:1 for monoecious: and romonoecious: gynomonoecious: hermaphrodite was obtained, respectively, as presented in (Table 1). In the F2 (Alimin´ Paul), the segregations ratio was significant (χ2= 5.928 P< 0.11) but not the same as in the F2(PI 222187 ´ Paul) and the F2 (Snakemelon´ Paul). In both progenies, the segregating ratios were less than 5%.In some plants, male flowers with rudimentary ovary were observed (abnormal male) which produced fruit with irregular shape (Fig. 1 and 2). The appearance and sequential of the abnormal male was similar to male flowers in the main stem and lateral branches. 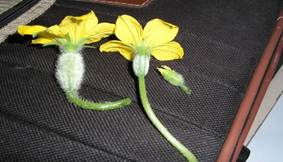 Figure 2. Shape of the fruit produced from abnormal male flowers.

For agronomic trials Table 2 showed the means of earliness, fruits number and fruits weight of the genotypes of BC in advanced stage of genetic purity for hermaphroditic character compared to their monoecious flexuosus parents. All the lines significantly exceeded the parents in earliness (P < 0.01), lines derived from the cross of (Alimin´Paul) produced flowers earlier (33-43 days) than those derived from the cross of Snakemelon ´ Paul (36-57 days). Among the 22 tested lines, only two lines, namely (BC Alimin´ F2(Alimin´ Paul) A1G3F1A and (BC F4 (Alimin´ Paul) ´Alimin) A1Y1A3B, were earlier in flowering than the others (33 days). The latest line flowering was BC F4 (Snakemelon ´ Paul) ´ Snakemelon A1A1A1B (57 days). The parent Snakemelon was the latest in flowering compared to other parents (66 days). The average of the parents was 53 days whereas the average of the lines was 39 days with reduction in earliness by about 26%. 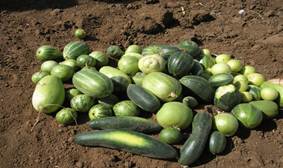 Fruit number exhibited significant differences among the lines and their parents (P < 0.01). The lines gave greater number of fruit (4-25) than the parents (2-6). The highest number of fruits was obtained from the line (BC Alimin´ F2(Alimin´ Paul) A1A1A1A, which was 25 fruits. The lowest numbers of fruits were obtained from the parents Snakemelon, PI 222187 and Silka, which were 2 and 3, respectively. The percentage of increase in yield (fruit number) was about 275%.

Table 2. The means of the days to flowering (days), number of fruits and fruit weight (fr.wt) of BC lines and their flexuosus parent.

Table 3. Segregating generation of sex expression of F2 (hermaphrodite x andromonoecious) and their BC.

For agronomic trials the Table 4 showed the means of earliness, number of fruits and fruit weight of the hermaphroditic lines derived from the crosses among hermaphrodite Paul and and romonoecious Tibish varieties. They showed no significant differences with respect to earliness. They started flowering during 34 to 57 days after sowing while the parents started flowering 40- 42 days after sowing.

Table 4.The means of days to flowering (days), number of fruit and fruit weight (fr.wt) of the BC lines and their tibish parents.

Tibish was domesticated recently as a melon type [13], which was different from another intra-specific melon groups[14] and considered as a source of resistance to some major diseases of melon [15]. On the other side, the inheritance of sex expression in tibish was complicated because there are two linked genes were involved in the loci of and romonoecya/A[4]. Moreover, no pleiotropic effects of and romonoeciousgene ‘a’were expected on fruit shape because it will be in dominant form. More studies concerning stability of hermaphrodite and fruit quality are required.