The ability of seeds to germinate at high salt concentration in the soil is crucial importance for the survival and perpetuation of many plant species. Therefore, we examined effects of different concentrations of NaCl (1ppm, 2ppm, 3ppm, 4ppm and 5ppm) on germination of Lycopersicon esculentum. By this experiment, we wanted to determine which concentrations of salt would not interfere with germination of tomato seeds. The obtained results showed that tomato seeds germination affected by concentration of NaCl (200 mM). However, distilled water. When GA3 was added, seeds of C. annum germinated in great number, but seeds of other plants did not germinate.

Salinity is currently one of the most severe abiotic factors, limiting agricultural production. In arid and semi-arid lands, the plants are subjected throughout their life cycle to different stresses; some of these plants can tolerate these stresses in different ways depending upon plant species and type of stress. Excessive salinity reduces the productivity of many agricultural crops including most of the vegetables. Knowledge of salt tolerance in vegetable plants is necessary to increase productivity and profitability of crops irrigated with saline wastewaters. According to USDA report, out of all vegetables, tomato is moderately sensitive to salinity. Salt stress has three fold effects which reduces water potential and causes ion imbalance and toxicity (de la Peña and Hughes 2007). Salt stress affects some major processes such as germination, speed of germination, root/shoot dry weight and Na+/K+ ratio in root and shoot (Parida and Das 2005).

Salinity has reached a level of 19.5% of all irrigated land and 2.1% of dry-land agriculture worldwide (FAO, 2005). Excess salt in soil solution may adversely affect plant growth, either through osmotic inhibition of root water uptake or by specific ion effect. In many crop plants, seed germination and early seedling growth are the most sensitive stages to environmental stresses such as salinity (Sivritepe et al., 2003).

Salinity may cause significant reductions in the rate and final percentage of germination, which in turn may lead to uneven stand establishment and reduced crop yields (Foolad et al., 1999).

Germination is a critical part of plant life histories. The ability of their seeds to germinate at high salt concentration in the soil is therefore of crucial importance for the survival and perpetuation of these species. In saline habitats, seed germination takes place after high precipitation, i.e., under conditions of reduced soil salinity (Khan and Rizvi, 1994). The ability of the soil seed bank to remain quiescent at a high salt level and to germinate immediately after salinity reduction (Bajji et al., 2002) is very significant not only to halophytes, but also to other species in colonizing their environment. Although salinity stress mostly reduces the germination percentage and delays the onset of germination, its effects are modified by interactions with other environmental factors as temperature and light. Salinity can affect germination by affecting the osmotic component, which the ionic component, i.e., Na and Cl accumulation (Živkovic et al., 2007).

Seeds of Lycopersicon esculentum were obtained from the ministry of agriculture of Central Darfur State and the study was conducted at the lab of the Department of Horticulture, University of Zalingei, Central Darfur, Sudan. Each 50 seeds were placed in Petri dishes 6 cm in diameter with 2 ml of distilled water or NaCl solution. In this experiment used follows concentrations of NaCl: 0ppm, 1ppm, 2ppm, 3ppm, 4ppm and 5ppm. Seeds were germinated at 25 ± 20C in opened lab condition. Whole experiment was repeated for times for each solution or distilled water. Number of germinate seeds was determined every second day since the beginning of deterioration of seedlings. During this time, the percentage of germination was determined twice. Germination was scored for 10 days.

Effect of Salinity on Germination:

The groups of plants that are well adapted to saline habitats are called halophytes. Their seeds germinate well in freshwater and the germination is similar to that of seeds of non-adapted species. However, they differ from them in ability to germinate at higher salt concentrations in the soil. Salinity tolerance of many perennial halophytes dependent on a variety of abiotic factors (Baskin and Baskin, 1998).

However, these seeds remained viable, and after rinsing with distilled water and transferred in medium free of NaCl, they germinated in significant number. Published data show that the effect of NaCl on seed germination is mostly osmotic (Loercher, 1974; Reynolds, 1975), but the nature of its effect is unknown. There were differences in the germination percentage according to different in salinity.

It is known that the effect of salts on plants leads to physiological drought. It can be concluded that salt reduces the water potential of soil solution, which prevents the supply of water by plants. They in the salty soils receiving large amounts of salt in root cells, and thus reduces the water potential, so it increases the absorption of water in physiological drought conditions.(Fig. 1) 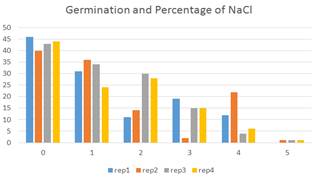 Figure 1. Germination percentage of tomato seeds as influenced by NaCl.

4. Effect of Salinity on the Different Traits of the Tomato

Among this study tomato seed were least affected by higher salinity stress. The genotypes which are least affected may be potential source of salinity tolerance for tomato breeding (Cuartero and Munoz 1999; Hazer et al. 2006; Amir et al. 2011; Hamed et al. 2011). The effect of external salinity on seed germination may be partially osmotic or ion toxicity, which can alter physiological processes such as enzyme activities (Croser et al. 2001; Essa and Al-Ani 2001).

5. Effect of Salinity on Speed of Germination

The salinity notably affects germination in tomato but also lengthens the time needed to complete germination (Amir et al.2011). In the present study also the speed of germination was reduced i.e. it took more days to increase the amount of germinated seed under salinity. In parents, this ranged from 4.90 days (control) to 13.20 days (at 3 % NaCl) and in F1s, from 5.11 days (control) to 13.36 days (at 3 % NaCl) (Table 1). The highest number of germinated seed were registered in the lowest concentration (control) while the lowest amount of the germinated seeds were considered when the concentration increase from 1ppm up to 5ppm. Tomato seeds needed approximately 50 % additional time to germinate at 1ppm NaCl than in control medium and almost 100 % more time at 5ppm NaCl concentration (Table 1).

Table 1. Effect of different concentration of Nacl on Tomato seeds.

Values within columns with the same superscript letters are not significantly different at P>0.05.