A brief history of the exchange rates between the Uganda shilling and the United  States dollars is given. Moreover, this work involves modeling of their monthly exchange rates by seasonal Box-Jenkins methods. Clearly with time more shillings are exchanged for the dollar, an evidence of relative depreciation of the shilling. An inspection  of a realization of the time series which covers from July 1990 to November 2014 reveals a 12-monthly seasonality. A 12-monthly seasonal differencing and then a non-seasonal differencing of the seasonal differences is enough to rid the series of non-stationarity. The autocorrelation structure of the resultant series suggests two seasonal autoregressive integrated moving average (SARIMA) models of orders: (0, 1, 1)x(0, 1, 1)12 and (0, 1, 1)x(1, 1, 1)12. Diagnostic checking shows that the former is the more adequate on all counts. It is therefore recommended that forecasting of the series be based on it.

Despite the fact that many studies on inflation (Durevall et al. 2012) have tried to suggest models about the Sub-Saharan African economies, perhaps no study so far has tried to develop a Ugandan specific model that deals with comparisons between the Uganda shilling (UGX) and the United States dollar (USD). The Phillips curve approach which is mainly used to estimate inflation in developed economies is not appropriate for agricultural economies, like Uganda. This study therefore will intend to come up with a model that can fill the gap.

As mentioned above, Uganda’s economy went through a period of decay (1978-1986). Real GDP declined to negative levels, including the key export commodity coffee, with officially reported production falling drastically. The budget deficit was increasing at an annual rate of 23% and was financed by simply printing money. Triple-digit inflation resulted and the differential between the official exchange rate and the black market rate was 1:30. There was an acute shortage of foreign exchange during this period. And as it became increasingly difficult to obtain foreign exchange, with foreign exchange dealings withdrawn from commercial banks to the central bank, a new parallel foreign exchange market developed, popularly known as kibanda in Uganda.

The official exchange rate was fixed at 7.80 UGX per USD, but the excess demand for foreign exchange pushed the parallel market rate to 300 UGX per USD. Uganda, therefore, witnessed the emergence and subsequent expansion of an active parallel economy; primarily concentrated in the foreign exchange sector of the economy, mis-invoicing and smuggling of exports and imports. On the eve of 1981, Uganda had a fixed exchange rate regime, high inflation, an active parallel market, and gross monetary and financial indiscipline.

In June 1981, Uganda adopted its first structural adjustment programme with the support of the IMF and World Bank (Bank Of Uganda, 2009). This policy package included price liberalization, devaluation, trade policy reforms, public enterprise and fiscal reform including reduced subsidies and rationalization of public spending. The major component of this programme at the time was exchange rate adjustment. Because inconsistent macroeconomic policies over the previous decade had led to real exchange rate misalignment and deterioration of the country’s external position, these stabilization efforts were successful initially. However, success proved transitory as inadequate policies and socio-political insecurity reversed the initial gains.

Between 1981 and 1988, the government repeatedly devalued the Uganda shilling in order to stabilize the economy. In mid-1980 the official exchange rate was UGX9.7 per USD. When the Obote government floated the shilling in mid-1981, it dropped to only 4 percent of its previous value before settling at a rate of UGX78 per USD. In August 1982, the government introduced a two tier exchange rate. It lasted until June 1984, when the government merged the two rates at UGX 299 per USD. A continuing foreign exchange shortage caused a decline in the value of the shilling to UGX 600 per USD by June 1985 and UGX 1,450 in 1986.

In May 1987, the government introduced a new shilling, worth 100 old shillings, along with an effective 76 percent devaluation. As a result, the revised rate of UGX60 per USD was soon out of line with the black market rate of UGX350 per USD. Following the May 1987 devaluation , the money supply continued to grow at an annual rate of 500 percent until the end of the year. In July 1988, the government again devalued the shilling by 60 percent, setting it at UGX450 per USD. The government announced further devaluations in December 1988 to UGX165 per USD; in March 1989, to UGX200 per USD; and in October 1989, to UGX340 per USD. By late 1990, the official exchange rate was UGX510 per USD; the black market rate was UGX700 per USD. The UGX depreciated by 12.8 percent on annual basis to an average midrate of UGX 2,582.18 per USD in November 2011.

In this work interest is in proposing a time series model for the forecasting of the monthly UGX – USD exchange rates by seasonal Box-Jenkins methods.

where {et} is a white noise process and the a’s and b’s are constants such that the model is both stationary and invertible. The model is denoted by ARMA(p, q).

If a time series {Xt} is indeed non-stationary as often is the case, Box and Jenkins (1976) proposed that differencing to a sufficient order could make it stationary. Suppose d is the minimum order for which the dth difference {ÑdXt} of {Xt} is stationary. Suppose {ÑdXt} follows an ARMA(p, q) then {Xt} is said to follow an autoregressive integrated moving average model of order p, d and q  designated ARIMA(p, d, q).

If {Xt} is seasonal of period s, Box and Jenkins (1976) furthermore proposed that it may be modeled by

where F(L) and Q(L) are respectively the seasonal AR and MA operators. Suppose they are respectively polynomials of degrees P and Q in L, the model (3) is referred to as a multiplicative seasonal autoregressive integrated moving average model of order p, d, q, P, D, Q and s  denoted by SARIMA(p, d, q)x(P, D, Q)s. All the parameters of the models are such that the dual conditions of stationarity and invertibility are met. D is the minimum order of seasonal differencing.

The estimation of model (3) invariably begins with the determination of the orders. The seasonal period s may be obvious from knowledge of the seasonal nature of the series. If not so obvious an initial inspection could reveal it. Moreover the autocorrelation function (ACF) of a seasonal series is sinusoidally patterned of the same periodicity as the series. The non-seasonal and the seasonal AR orders, p and P, are respectively estimated by the non-seasonal and the seasonal cut-off lags for the ACF. Similarly, the MA orders, q and Q, are respectively estimated by the cut-off lags of the partial autocorrelation function (PACF). Choosing the differencing orders d and D such that they add up to not more than 2 is often enough to make the series stationary. Stationarity shall be tested via the Augmented Dickey Fuller (ADF) Test before and after differencing of the series.

Granted that the orders have been estimated, parameter estimation is done on the basis of non-linear optimization techniques because of the presence of white noise terms in the model. The eviews 7 software was used to analyze the series. It uses the least squares criterion for model estimation. Comparison of models is often done on the basis of the minimum of certain criteria like the Akaike Information criterion (Akaike, 1977), Schwarz Criterion (Schwarz, 1978) and Hannan-Quinn Criterion (Hannan and Quinn, 1979). 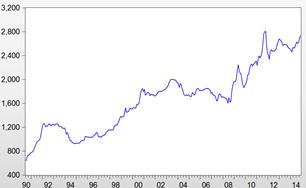 The time plot of the realization referred to herein as UGDO in Figure 1 shows an overall positive secular trend which indicates a comparative depreciation of the UGX. An initial inspection reveals that annual minimums tend to fall into the first half of the year and the maximums in the later half which is an indication of yearly seasonality. The ADF test statistic value for UGDO is -0.72 and the 1%, 5% and 10% critical values are respectively equal to -3.45, -2.87 and -2.57 respectively. That means the UGDO is adjudged non-stationary. A twelve-monthly differencing of UGDO yields SDUGDO which shows an overall horizontal trend (See Figure 2). With a test statistic value of -3.36, at 1% level of significance, SDUGDO is adjudged as non-stationary also. Its correlogam of Figure 3 attests to its non-stationary nature also. Non-seasonal differencing of SDUGDO yields the series DSDUGDO which also has a flat trend (See Figure 4) and with a test statistic value of -6.00 is certified as stationary by the ADF test. Its correlogram of Figure 5 shows an ACF and PACF suggestive of two models: a SARIMA(0, 1, 1)x(0, 1, 1)12 and a SARIMA(0, 1, 1)x(1, 1, 1)12. 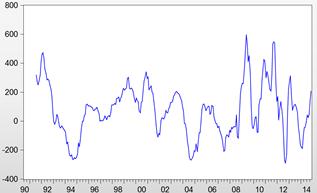 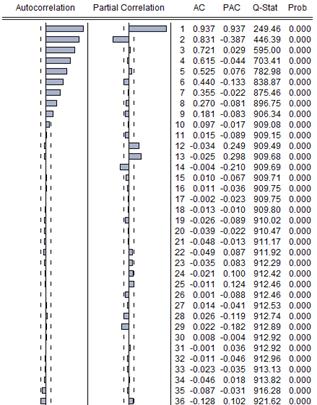 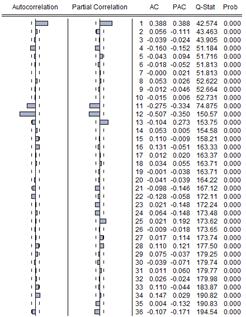 The former model is estimated in Table 1 as

The latter is estimated in Table 2 as

Model (4) is the better model in the minimum AIC, Schwarz criterion and Hannan-Quinn criterion sense. The fitted model agrees closely with the data as shown in Figure 6. The correlogram of its residuals in Figure 7 attests to the model adequacy as all the autocorrelations are not statistically significant.

It has been demonstrated that monthly UGX –USD exchange rates follow a SARIMA(0,1,1)x(0,1,1)12 model. Forecasting of the series may therefore be based on it.