Dill (Anethumgraveolens L., Apiaceae) is a plant species often cultivated for the flavouring and curative properties (digestive disturbances accompanied by meteorism, flatulence and gastro-intestinal spasms, urinary infections, insomnia, galactogenicalhypo secretion, etc). Some studies demonstrated the antimicrobial, stomachic, antioxidant, carminative properties of dill. In order to establish the flavonoids content of different dill parts (herb, umbles, stems and leaves)pre-sowing seeds were irradiated with gamma radiation doses (0, 2, 4, 8, 16, 32 and 64 k-rad) with or without bio-fertilizers (at 2 kg/fed.). The recorded results showed that in the two seasons, using bio-fertilizer or gamma radiation doses significantly increased total flavonoids content, the most effective treatment on the total flavonoids content in different plant parts was 64 k-rad with bio-fertilizers which recorded higher flavonoids content. Also, the highest percentage of flavonoids was obtained from umbels followed by vegetative herb then flowering herb, whereas stems and leaves at flowering stage gave the lowest percentage of flavonoids.

Plants are the good sources for the discovery of pharmaceutical compounds and medicines. Natural products could be potential drugs for humans or live stock species and also these products and their analogues can act as intermediates for synthesis of useful drugs (Makkar et al., 2009). Plants possess many photochemical with various bioactivities including, carotenodis, ascorbic acid, α-tocopherol and polyphenols (Salah et al., 1995; Edge et al., 1997; Papas 2002). Natural antioxidants haven't cause health problems that may arise from the use of synthetic antioxidants which have side effects (Arouma et al., 1992). Polyphenols have been identified in higher plants and several hundred are found in edible plants. Phenolic compounds are classified into different groups as a function of the number of phenol rings that they contain and of the structural elements that bind these rings to one another (Manach et al., 2004).They are secondary metabolites of plants, currently known more than 8000 phenolic structures ranging from simple molecules such as phenolic acids to highly polymerized substances such as tannins. Plant phenolics are generally involved in protection against ultraviolet radiation or aggression by pathogens, parasites and predators, as well as contributing to plants (Dai and Mumper, 2010). According to molecular structures, flavonoids are divided into six classes: flavones, flavanones, flavonols, isoflavones, anthocyanidins and flavanols (or catechins) (Tripoli et al., 2007). In addition to free radical scavenging and antioxidant power, flavonoids have multiple biological activities, including vasodilatory, anticancirogenic, anti- inflammatory, antibacterial, immune- stimulating, antiallergenic, antiviral and estrogenic effects, as well as being inhibitors of several enzymes. However, the use of flavonoids in several domains is limited by their low stability and solubility in the fatty and aqueous phases (Chebil et al., 2006). Flavonoids behave as antioxidants by a variety of way including trapping of reactive oxygen species, inhibition of enzymes responsible for superoxide anion production, chelation of transition metals involved in process forming radicals and prevention of the peroxidation process by reducing alcoxyl and peroxyl radicals (Biesaga, 2011).Environmental factors have major effect on polyphenol content. These factors may be soil type, sun exposure, rainfall or agronomic (culture in greenhouses or fields, biological culture, hydroponic culture etc). the degree of ripeness considerably affects the concentrations and proportions of the various polyphenols. Polyphenols are easily oxidized- oxidation reactions result in the formation of more or less polymerized substances, which lead to changes in the quality of food, particularly in color and organoleptic characteristics (Manach et al., 2004).Forexample, polyphenolic compounds like flavonols, flavones or the flavonoids, have gained considerable interest as they are proved to be very effective protecting against cardiovascular diseases by reducing the oxidation of LDL as well as preventing other degenerative diseases (Alothman et al., 2009; Pierini et al., 2008). Some studies underlined different factors such asgenotype, cultivation techniques, climatic conditions that occur during the pre-harvest period, post-harvest storage conditions and processing which may affect the chemical composition of plant foods and they may have an important role in determining the phenolic composition and the bioactivity of these compounds (Imeh et al., 2002; Lee and Kader, 2000). Radiation processing is well established as a physical, non-thermal method to preserve various food products that involves the exposure of food products (raw or processed) toionizing or non-ionizing radiation (Antonio et al., 2012). Irradiation of food products causes a minimal modification in the flavor,color, nutrients, taste, and other quality attributes offood (Diehl, 2002). However, the levels of these modifications might vary depending on the basic raw material used, irradiation dose delivered, and on the type of radiation source employed (gamma-ray, X-ray, UV, electronbeam) (Bhat et al., 2007; Bhat and Sridhar, 2008; Mexis et al., 2009). Irradiation can also influence the levels ofantioxidants / phytochemicals in plant products (Behgar et al., 2011). It has been reported that under certain favorable conditions, the concentration of plant phytochemicals might be increased. These conditions contain exposure toirradiation sources, wounding, storage at low temperatures, and/or exposure to extreme temperatures(Zobel, 1996).Gamma radiation, more energetic than X-rays, is used from sources of radioactive isotopes, cesium-137 orcobalt-60, and it is identified by the World Health Organization as a food preservation technique that improves food safety without altering the toxicological, biological or nutritional quality of the food (Diehl, 2002; Farkasand Mohácsi-Farkas, 2011; Joint, 1981; Käferstein and Moy, 1993). Gamma irradiation treatment has been widely studied on vegetables and fruits for many years, and the results of this sterilization method are very interesting. It has been reported that gamma irradiation could increase phenolic content in almond skin (Harrison and Were, 2007), cinnamon and clove while phenolic content in nutmeg remained unaltered (Cantos et al., 2000; Variyar, 1998). Irradiation reduced the tannin content and activity of antioxidants of pistachio hull extracts but increased the total phenolic content (Behgar et al., 2011). Whereas many reports have shown that gamma irradiation decreased phenolics (De Toledo et al., 2007). The fertilizer impact on vegetative growth is well documented. However, the effect of bio-fertilizer and gamma radiation on flavonoids in dill plants is lacking. Hence, the objective of this study was to examine the effect of bio-fertilizer and gammar adiation doses(0, 2, 4, 8, 16, 32 and 64 k-rad) on the production of secondary metabolites (total flavonoids) of different parts of dill at vegetative and flowering stages.

The experiments of this study were carried out at the Farm Station of National Research Centre, at Shalakan Kalubia Governorate during the two successive seasons of 2000/2001 and 2001/2002. Seeds of dill (Anethum graveolens L.) were obtained from Medicinal and Aromatic Research Dep., Ministry of Agriculture, Egypt. Dry seeds of dill were irradiated with gamma rays doses at 2, 4, 8, 16, 32 and 64 k-rad before sowing. The source of irradiation is installed at the Middle Eastern Radioisotope Centre for the Arab Countries, Dokki, Giza, Egypt. The bio-fertilizers used in this study were Rhizobacterin (a mixture of Azotobacter and Azospirillum) and Microbein (a mixture of Azotobacter, Azospirillum, Pseudomonas, Rhizobium and Bacillus). Bio-fertilizers produced by General Organization for Agriculture Equalization Fund (G.O.A.E.F.). The dill seeds were sown in 15thoctober in the two seasons. The used bio-fertilizers (1kgRhizobacterin+1kgMicrobein/feddan) added as inoculated the seeds and sowing. The experimental design of the three experiments was factorial and planned in a complete randomized block design.

The data of the three experiments were statistically analyzed and the differences between the means of the treatments were considered significant when they were more than least significant differences (L.S.D) at 5% level according to Steel and Torrie (1980).

Table 1. Effect of bio-fertilizers, gamma radiation and their interaction treatments  on the total flavonoids content (%) of dill plants during the two seasons (2000/2001 and 2001/2002). 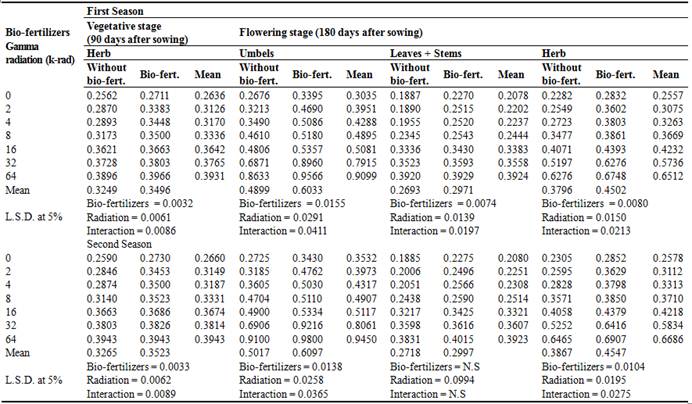 Data reported in Table (1) show the effect of different gamma radiation doses and bio-fertilizer treatments on total flavonoids percentage of dill plants during the two stages and both seasons. Also, the highest percentage of flavonoids was obtained from umbels followed by vegetative herb then flowering herb, whereas leaves+stem at flowering stage gave the lowest percentage of flavonoids. Generally, total flavonoids responded significantly to gamma radiation doses and bio-fertilizer each of alone or together in comparison to that of control ones. It is clear that the largest percentage of total flavonoids in dill plants was obtained by the combined treatment of 64 k-rad plus bio-fertilizer giving (0.3966 and 0.3943%) in the herb of vegetative stage and both seasons, respectively. Also, the same treatment at the flowering stage gave the highest values as follows: herb (0.6748 and 0.6907%), umbels (0.9566 and 0.9800%) and leaves + stems (0.3929 and 0.4015%) in both seasons, respectively. (Mattilaet al., 2001 and Iwalokun, et al., 2007) who found no flavonoids in P. ostreatus as they investigated the comparative phytochemical, antimicrobial, and antioxidant properties and also, contents of vitamins, mineral elements, and some phenolic compounds in cultivated mushrooms, respectively. Similar results were obtained by (Moghaddam et al., 2011; Kortei et al., 2014). The favorable effect of bio-fertilizers on chemical constituents of dill may be due to the fact that non-symbiotic bacteria have the ability to supply the plants with N and thereby increase chemical contents in different plant tissues (Bashan and Holguin, 1997).Similar results were obtained by (Khalil, 2006; Taie et al., 2008; Naguib et al., 2012; Nur Faezah et al., 2013).

There is a scarcity of data on the effect of the form of N on the production of secondary metabolites in plants (Brandt and Molgaard, 2001). When N availability is limited, metabolism changes more towards carbon-containing compounds such as starch, cellulose, and non-N-containing secondary metabolites such as phenolics and terpenoids (Haukioja et al., 1998). Recently, Hakkinen and Torronen (2000) compared the phenolic content in three cultivars of strawberries grown organically and conventionally. They reported that only one cultivar grown under organic conditions showed higher levels of phenolics than its inorganically grown counterparts. Asami et al. (2003) reported significantly higher total phenolics in marionberries grown with organic fertilizer as compared with inorganic fertilizer. Weibel et al. (2000) indicated that the phenol (mainly flavonols) content of organically grown apple cultivars was 19% higher than in apples grown using inorganic fertilizers. These results suggest that the usage of organic fertilizers can enhance the production of plant secondary metabolites. Ibrahim et al. (2013) observed that that application of organic fertilizer increased the production of total phenolics and flavonoids contents in L. pumila Benth. Increased fertilization rates above 90 kg N/ha to 180 and 270 kg N/ha resulted in a decrease in the total phenolics and flavonoid contents. Ferry et al. (1996) and Ranelletti et al. (1999) have also shown that these phenolics and flavonoids had anticancer activities, and that they were able to inhibit cancer cell growth. The increase in production of secondary metabolites under organic fertilization in the present study might be due to high in micronutrients content in the organic fertilizer used. Plants grown under organic agricultural conditions are reported to have higher micronutrient content in more cases than conventionally grown plants (Weibel et al., 2000; Ibrahim and Jaafar, 2001). Considering the fact that some of chemical reactions in cells involve minor elements, either directly or indirectly, this could explain why organic-fertilized plants exhibited higher production of secondary metabolites (Bimova and Pokluda, 2009).