A realisation, TBR, of Nigeria Treasury Bill Rates from January 2006 to December 2014 is analysed by seasonal ARIMA methods. The time plot of the realisation reveals an overall downward trend from 2006 to 2009 followed by an overall upward trend up to 2013. Twelve-monthly differencing of TBR yields the series SDTBR which has an overall upward trend. Non-seasonal differencing of SDTBR yields the series DSDTBR with an overall horizontal trend and no clear seasonality. By the Augmented Dickey-Fuller Unit Root Test both TBR and SDTBR are adjudged non-stationary whereas DSDTBR is adjudged stationary. The correlogram of DSDTBR has a negative significant spike in the autocorrelation function at lag 12, an indication of seasonality of period 12 months and the presence of a seasonal moving average component of order one. By a novel proposal credited to Suhartono, initially the (0, 1, 1)x(0, 1, 1)12 SARIMA model is fitted. The non-significance of the lag 13 coefficient suggests the additive SARIMA model with significant coefficients at lags 1 and 12. This model is fitted and has been shown to be the more adequate model and may be used to forecast future Nigeria Treasury Bill Rates.

Many economic and financial time series are known to be seasonal as well as volatile. For instance, crude oil prices, inflation rates, foreign exchange rates, crude oil domestic production are a few such series. Seasonal time series may be modelled using seasonal autoregressive moving average (SARIMA) techniques. Nigeria Treasury Bill Rates constitute such a time series. The purpose of this write-up is to model these rates by SARIMA methods.

Nigeria Treasury Bill is a short-term debt instrument given out by the Federal Government of Nigeria through the Central Bank of Nigeria (CBN) to provide short-term funding for the government (Cashcraft Asset Management Limited, 2013). It is risk-free and re-discountable through licensed Money Market Dealers (Balogun, 2013). The rates are determined by the CBN according to market realities.

Further descriptions of this facility include the following. It is a short-term negotiable bill of exchange, used by government to fund national borrowing requirements, quoted for purchase and sale in the secondary market on an annual percentage yield to maturity and issued at a discount. Its features further include being at zero coupon rate, that is, no interest is paid during the tenure of the bill, being issued in fixed tenures of one-fold, two-fold and four-fold multiples of 91 days. Primary dealers and investment may underwrite it and the interest is paid upfront. Benefits accruable include the fact that they are regarded as liquid assets for the purpose of liquidity ratio calculation and interest received on it is not taxable.

It is Suhartono (2011) and Suhartono and Lee (2011) that defined a subset, multiplicative and additive SARIMA model. Using airline data Suhartono observed that the subset model outdid the additive one. However with the tourist arrival to Bali data, the additive model displayed some supremacy over the subset model.  Suhartono and Lee (2011) observed that the additive model outdid the others in terms forecasting the number of tourist arrivals at Bali. Both works aimed at proposing a new algorithm for SARIMA fitting. This algorithm shall be considered in detail in the methodology section. The SARIMA models fitted by Etuk et al. (2013) and Etuk et al.(2014) to monthly Nigerian Naira-CFA Franc Exchange Rates and Monthly Nigerian Savings Deposit Rates respectively turned out to be additive.

The data for this work are monthly Nigeria Treasury Bill Rates from January 2006 to December 2014 retrievable from the Money Market Indicators, Data and Statistics publication of the CBN in its website www.cenbank.org.

A stationary time series {Xt} is said to follow an autoregressive moving average model of orders p and q, designated ARMA(p, q), if it satisfies the following difference equation

where {et} is a white noise process and the a’s and b’s are constants such that the model is both stationary and invertible. Model (1) may be written as

Most real life time series are non-stationary. Box and Jenkins(1976) proposed that differencing to a sufficient order could render a non-stationary time series stationary. Suppose the series {Xt} is non-stationary. Let d be the minimum order such that the dth difference of Xt , namely, ÑdXt, is stationary where Ñ = 1 - L. Stationarity may be tested using Augmented Dickey-Fuller(ADF) Unit Root Test. If the series {ÑdXt} follows an ARMA(p, q) the original series {Xt} is said to follow an autoregressive integrated moving average model of orders p, d and q designated ARIMA(p, d, q).

For a seasonal time series of order s, Box and Jenkins(1976) proposed that {Xt} be modelled by

The parameters of the model are invariably estimated by non-linear optimization techniques because of the involvement of items of the white noise process in the model. An initial estimate of the parameters is usually made and on its basis further estimates are obtained iteratively, each estimate expected to be an improvement on its predecessor until optimality is attained depending on the degree of accuracy required. The optimality criterion employed is usually the least squares criterion, the maximum likelihood criterion, the maximum entropy criterion, etc. 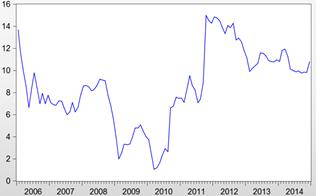 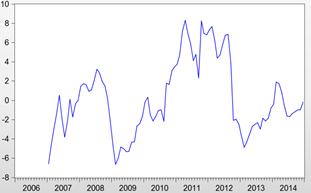 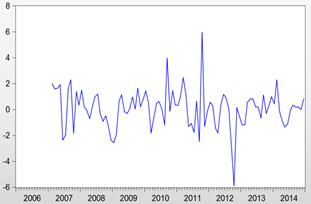 The time plot of the realization TBR in Figure 1 reveals an overall negative trend between 2006 and 2009, followed by an overall positive trend from 2010 onwards. Regular seasonality is not obvious. However an inspection of the data reveals that yearly minimums occur in May, July, December, February, March, July, December, February and September respectively. That means that six of the nine minimums lie between February and July of the same year. Similarly, five of the nine maximums lie in the remaining part of the year. This is an indication of a 12-monthly seasonality. This justifies a SARIMA modelling approach.

A twelve-month differencing of this original series yields the series SDTBR which has an overall slightly upward trend with no observable regular seasonality as evident from Figure 2. A non-seasonal differencing results in the series DSDTBR which shows no trend on the overall and no clear seasonality (See Figure 3). The ADF unit root test statistic for TBR, SDTBR and DSDTBR is equal to -1.9, -2.4 and -8.6 respectively. With the 1%, 5% and 10% critical values equal to -3.5, -2.9 and -2.6 respectively, the ADF test adjudges both TBR and SDTBR non-stationary but DSDTBR stationary.  In the correlogram of DSDTBR in Figure 4, there is a negative significant spike at lag 12 in the ACF. This shows that the series is seasonal of period 12 months. Moreover, this is an indication of the presence of a seasonal MA component of order one.

Clearly the lag 13 coefficient is non-significant. Hence the model is additive which is re-estimated as summarized in Table 2 as

1) The close agreement of the fitted model and the actual model (See Figure 5).

2) The uncorrelatedness of the residuals as seen from their correlogram of Figure 6. None of the 36 autocorrelations is significant (i.e. outside of the range ±2/Ön, where n is the sample size).

It may be concluded that Nigeria Treasury Bill Rates follow the additive SARIMA model (6). That means that a current value of the time series depends on the past value of a month ago and that of a year ago of shocks or its error terms. This model has been shown to be adequate and could be used for the forecasting of Nigeria treasury Bill rates. However efforts should be made to explore the possibility of models that better account for the variability in the time series. 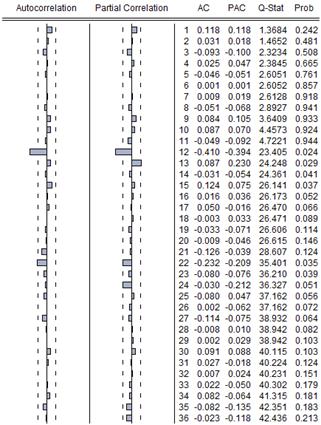 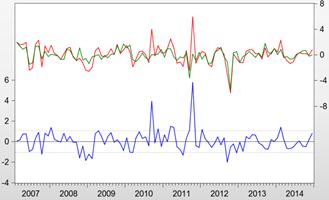 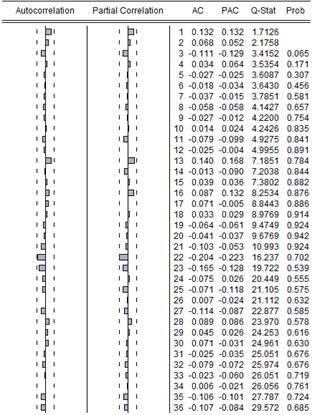 Figure 6. Correlogram of the Residuals of the Additive Sarima Model