Amangwu-Edda, lies within the Afikpo Sub-Basin, a sedimentary basin set up during the late Cretaceous period following the Santonian uplift in the southern Benue Trough. Local stratigraphy and field relationship show that the lithologic succession consists of black to dark grey, fossiliferous and gypsiferous shales with subordinate limestone lenses and siltstone. Palynological analysis of the shale samples collected from the surface outcrops in the area yielded a total of 117 palynomorphs, made of 24 pollen species, 9 spore species and 19 dinoflagellate species, while foraminifera biostratigraphic analysis yielded 68 forams. The abundance of the pollen species of Longapertites sp., Monosulcites sp., and Monocolpites marginatus, the spore species of Cyathidites minor, Laevigatosporites sp., along with the dinoflagellate cysts species of Leoisphaeridia sp, Andallusiella sp., and Senegalinium sp, and especially a high abundance of the foraminifera species Bolivina anambra, suggest a nearly late Campanian to Maastrichtian age for the sediments. Based on the distribution of the palynomorph species recovered from the shale samples, the study area has been interpreted as an open marine to estuarine environment at the time of sediment deposition occurring during a period of marine incursion.

The study area, Amangwu-Edda, lies entirely in the Afikpo Sub-Basin, a depression set up subsequently with the Anambra Basin after the epierogenic event which folded and uplifted the Albian – Cenomanian sediments into the Abakaliki Anticlinorium [1]. The Afikpo Sub-Basin is a co-eval basin with the Anambra Basin, both lying unconformably on the Santonian sediments of the Benue Trough [2], even though recent studies have revealed that pre-Santonian sediments occur within the basin [3]. Sediments making up this basin include those deposited in the second depositional cycle as described in [1], from the Campanian to Maastrichtian. The study area is underlain entirely by the Nkporo Formation, the basal lithostratigraphic unit of the Afikpo Sub-Basin. This formation as observed in the study area comprises of grey to black coloured muddy shale, with dark coloured fine–medium sandstone lenses.The shale underlying the study area has high organic content and gypsum. The gypsum occurring in the sediments are diagenetic minerals occurring as scattered streaks in the beds. It has been acclaimed for its highly fossiliferous nature by previous authors who have worked on the sediments. Making a full utilization of the highly fossiliferous nature of the shale, this work incorporates data from both palynological biostratigraphy and the more conventional foraminifera biostratigraphy, as tools in acquiring the age and depositional history of the sediments, providing thus, unbiased information. The lithological and microfaunal association of the Nkporo formation suggests a restricted shallow marine environment [4]. A normal marine origin has however been suggested for the Asaga-Amangwu shale based on palynological evidences as obtained from palynological analysis, as well as a marginal to normal marine for the Nkporo formation, [4]. [2] assigned a Maastrichtian age for the sediments of this formation based on molluscs and fish teeth from Asaga-Amangwu and Nkporo village (type locality); with [5] suggesting an early Maastrichtian age for the sediments following an integrated study of foraminifera and palynomorphs; whereas, a late Campanian age was assigned to these sediments in [4] from palynological analysis alone. While much of these works were obtained from regional studies, this work studies particularly the microfaunal association of the study area.

In this study, samples were obtained from surface outcrops and road cuttings from five different locations within the study area (Fig 1) and analysed for their palynomorph contents in order to infer on the age of the sediments and their environment at time of deposition. 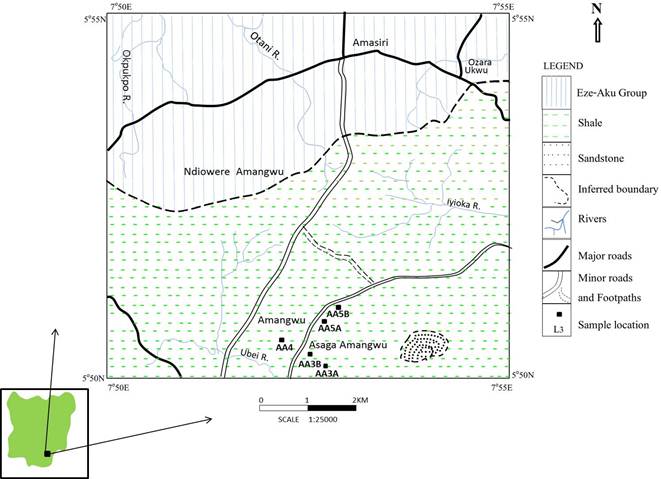 The tectonic origin of the Afikpo Syncline is intimately related to the development of the Benue Rift [6]. The Benue Rift is a poly-history basin which was installed as a failed arm of a tripartite rift system during the Cretaceous breakup of the Godwana supercontinent and the opening of the South Atlantic and Indian Oceans in the Jurassic period[7] (Fig. 2). The fault bounded Benue Trough is framed and floored by Precambrian granitic basement rocks of the continental crust. Epierogenic Santonian movements characterised by transpressional tectonics have folded and uplifted sediments deposited in the trough into the Abakaliki-Benue Anticlinorium [6].The Afikpo Sub-Basin was simultaneously formed as a depression in the south-eastern part of the folded belt.

The stratigraphic history of Southern Benue Trough is generally best described in terms of three tectono-sedimentary cycles as described in [6]. Sedimentation in the south-eastern basin however, is categorised by two sedimentary cycles which commenced in the lower Cretaceous and deposition of sediments in the basin was suspended during the Santonian epierogenic events (the Santonian unconformity) and continued until the Coniacian, ending with the deposition of the Ameki Formation/Nanka sands in the Anambra Basin (Table 1).The Nkporo Formation was deposited following the subsidence of the Afikpo Sub-Basin, and forms its basal lithostratigraphic unit. 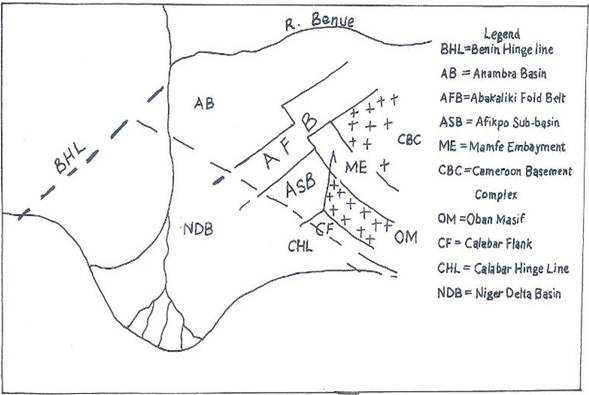 Fig 2. Tectonic map of south-eastern Nigeria. The position of the study area is enclosed in a circle. (Modified from [17]).

Table 1. Lithostratigraphic framework of the Southern Benue Trough and Afikpo Sub-Basin (Modified from [1] and [8])

Ten samples were obtained by digging into surface outcrops or road cuttings from the five locations where shale outcrops were exposed for recovery of palynological and foraminifera content; avoiding weathered samples which may contaminate the samples, and lead to erroneous results.

From the collected samples, a fraction weighing about 10g is macerated and poured in a labelled plastic container. Diluted Hydrochloride acid was added to remove carbonate materials, after which a 60% grade Hydrofluoride acid is used to digest all silicates contained in the samples. After desiccation, the residue is sieved in a 5µm mesh to remove clay size particles followed by non-oxidation of the samples and heavy liquid separation of the macerals. The palynomorphs recovered from the samples were mounted on a glass slide using Norland gel as a mounting medium. The recovered palynomorphs were identified and counted using a Leitz light microscope.  Distribution charts of the various palynomorph species recovered from the samples are given in Tables 2 to 5.

Counts of the pollens, spores, dinoflagellates, foraminifera and other stratigraphically important forms present were made to determine the relative frequency of each species in the samples. They were all described using published works from [3], [4], [5], [10], [12], [13], and [14].

The Nkporo Formation outcrops in the study area as shales, mudstones and ridges of sandstones. In the study area, the Nkporo formation is bounded in the north by sandstone ridges belonging to the older Cenomanian-Turonian Eze-Aku Group. The mudstones in the study area occur in the waterlogged regions of the study area, with enormous mud cracks on the surface. The sandstones in the northern part are ferrugenized and slightly consolidated with fine to medium grains occurring on alternating ridges, with the low-lying lands as shales. The shales are grouped into two lithofacies: the dark grey shale and the black shale. The dark grey coloured shales are very fissile and laminated and are very rich in fossils and gypsum; with the gypsum occurring as scattered streaks within the rock. The black coloured shales on the other hand are blocky and mostly fossiliferous than gypsiferous, with an abundance of macrofossil assemblages such as gastropods and bivalves, as collected in hand specimens, however, a relatively lesser amount of palynomorph forms were recovered from it. This lithofacies makes up the basal part of this lithologic succession in the study area. The very few or little occurrence of gypsum in this strata further buttresses this assertion, as a stratigraphic increase in gypsum content may suggests a shallowing upward bathymetry [3].

The analysis of the slides yielded a total of 117 palynomorph forms of 50 diversified species, comprising of 24 pollens, 9 spores and 17 dinoflagellate species (Table 2-5). The Acritarch taxon previously reported by [4] as the only Acritarch species encountered in their study was also recovered from the samples. The palynomorph forms recovered have been described by [3], [4], [5], and [10] on various investigations on the Calabar flank, Leru, Afikpo Sub-Basin, and the Anambra Basin.

Table 2. Chart showing pollen species of the shales at Asaga-Amangwu

Table 3. Chart of spore species recovered from the samples

The palynomorph assemblage recorded in these samples indicates a late Cretaceous age (Maastrichtian – Campanian). The presence of dinoflagellate cysts also suggests deposition of these sediments during a period of marine incursion.

The sediments in the study area is believed to have a late Campanian limit following works of [5] and [13], who all assigned a late Campanian age for these sediments using Andallusiella sp., Senegallinium sp. and Dinogymnium sp., dinoflagellate cyst species recovered from the samples. The high abundance of the dinocyst Leoisphaeridia sp. suggests too that the Campanian is the lower limit of the Asaga shale, and indeed, the Nkporo formation.

Table 4. Chart showing the distribution of dinoflagellate cysts in the samples

The paleoenvironmentof the study area is characterised by organic walled organisms occurring in the samples such as the dinocyst species Senegalinium sp., Andallusiella sp.,Cribroperidium sp., Spiniferites sp., and Dinogymnium sp. The distribution of terrestrial and marine species and the percentage frequencies of different palynomorph taxa were used as tools for interpreting the paleoenvironmental and paleocological condition of the study area The ratio of the percentage of occurrence of terrestrial palynomorphs (pollens and spores) to marine forms (dinoflagellate cysts) is used to make inferences on the paleoecology of the study area (Table 5, Fig. 3). With the fact that the percentage of marine species increases during sea transgression while pollens and spores decrease, the shale at Asaga Amangwu is suggested to have been deposited in a normal marine environment based on the distribution of the marine and terrestrial species in the samples.

Table 5. Chart showing the abundance and diversity of the palynomorph species

Fig. 3a & b. Graphical comparism of the ratio of marine to terrestrial species in the study area.

This corroborates further, the late Campanian – early Maastrichtian age of sediment deposition for the Asaga Amangwu shale sediments as suggested by the palynomorph species analyzed from the samples.

The study area is underlain by black to dark grey fissile, gypsiferrous shale, and is the lower-middle part of the Nkporo Formation. Palynological and foraminifera biostratigraphy of the samples collected from its sediments yielded a large amount of microfaunal taxa. 50 palynomorph and 12 Foraminifera species were recovered from the samples. The presence and abundance of certain stratigraphic marker palynomorphs such as Cyathidites minor, Longapertites sp. and Leoisphaeridia sp., Dinogymnium sp, Monocolpites marginatus, Senegallinium sp., Andallusiella sp. And Proxapertites sp. were used to date the sediments as late Campanian to early Maastrichtian. Foraminifera species such as Bolivinaanambra, Trochammina afikpoensis and Milliamina onyemaensis, also obtained from the samples further makes certain the findings from the palynomorphs.  A normal marine to estuarine environment is suggested as the environment of deposition, and it is believed that deposition of the sediments occurred during a period of marine incursion.